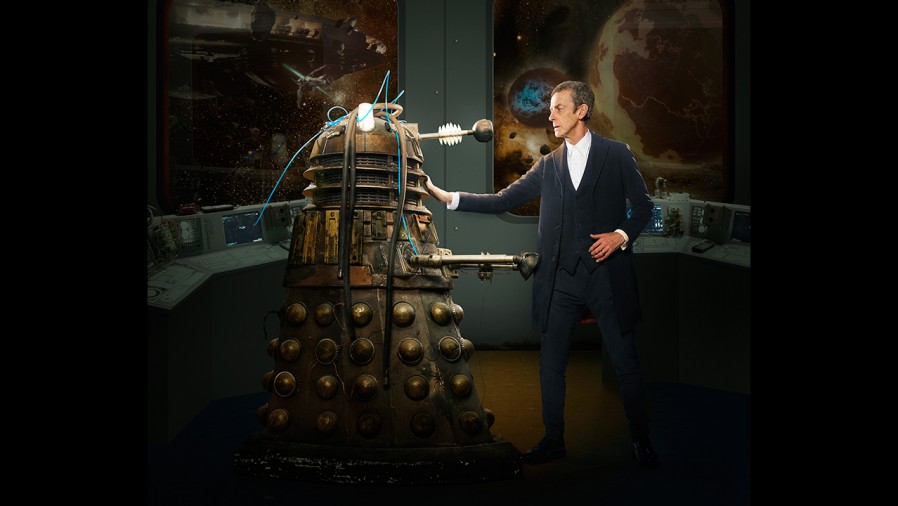 Doctor Who: Into the Dalek

I can now with confidence say that I like Peter Capaldi’s Doctor. A lot. In last week’s ‘Deep Breath’, Capaldi wasn’t given a huge opportunity to show us what his Doctor is made of, since his Doctor didn’t come into his own until the very end of the episode. This week, Capaldi delivered a strong performance in an entertaining, if somewhat predictable episode.  Spoilers below.

‘Into the Dalek’ signaled the return of Doctor Who’s most famous monsters: the Daleks, a mutant race genetically engineered to be angry balls of death and hate. Note the genetically engineered part of that description. It’s important, and it’s also why it was surprising that the Doctor encountered a space crew who had a ‘good’ Dalek that needed medical help. Sure enough, when the Doctor talked to it, the Dalek claimed to have seen the error of its ways and wanted to kill all the other Daleks for their crimes against the universe. But unfortunately, once the Doctor and his team got inside the Dalek and repaired it, they also turned it back into an angry ball of death and hate. Because what was wrong with the Dalek was a radiation leak that was changing its basic biology and allowing it to have compassion and remorse.

What followed was one of my biggest problems with the episode: the Doctor despaired that the Dalek wasn’t actually ‘good’, that by fixing it, he helped it revert back to its true nature. He was upset there was no such thing as a Dalek who was good. At this point Clara slapped him and asked if that was really what they learned. Which, you know….kind of? Daleks were literally engineered by a mad scientist to kill everything non-Dalek.  Okay, so Daleks are capable of accessing positive emotions- if you alter their basic brain chemistry. That’s not the same as a Dalek being able to redeem itself on its own merit. But perhaps this is part of a larger debate concerning morality, evolution and the show’s mythology created thus far, because this certainly isn’t the first Doctor Who episode to disregard what has been established in previous episodes.

The Doctor changed his mind and agreed with Clara, and tried to jog the Dalek’s memories and make it good again. This backfired, when the Dalek looked at the Doctor, saw nothing but hate in him, then killed all the other Daleks. The Doctor was then left with the trouble notion that he might not be much better than the Daleks after all.

It’s an interesting point to raise, but the show has done it before, notably in 2005’s ‘Dalek’. The two episodes are actually strikingly similar. One of the biggest differences is that in the 2005 episode, the Dalek did start to change, but not because of a radiation leak in its head. It was just evolving on its own volition. (Again: series-wide continuity errors).  It was hard not to notice the amount of parallels to ‘Dalek’, making ‘Into the Dalek’ feel somewhat repetitive in comparison. Comparisons aside, on its own, ‘Into the Dalek’ was a strong, well-written episode. It was able to create emotional investment in the guest cast, something that the show hasn’t been able to do consistently in a while.

Clara and the Doctor had amazing chemistry, especially when compared to last week’s episode, when they barely interacted, and when they did, it was mostly them fighting. Clara herself seemed to be back to normal, after last week, when she was an incoherent mess.

One thing that is a little odd is the life Clara established for herself outside of her TARDIS travels. Clara is a teacher. The Doctor appeared in the middle of a school day, whisked Clara away on a highly traumatizing adventure, then dropped her off right where he picked her up. Clara just changed her clothes, then went about her day. In a sci-fi show, there has to be a certain degree of suspension of belief, but that’s pushing it a little far. Previous companions gave up their normal lives to travel with the Doctor. Clara continues a trend that started with Amy and Rory, her predecessors, but it’s not very believable. No matter how well-adjusted someone is, it’s pushing it a little far to have someone watch people die, nearly die themselves multiple times, then pop out and teach an English lesson like nothing happened. Since the companion is usually the one the audience is supposed to relate to, this could become a problem if the show continues in this vein.