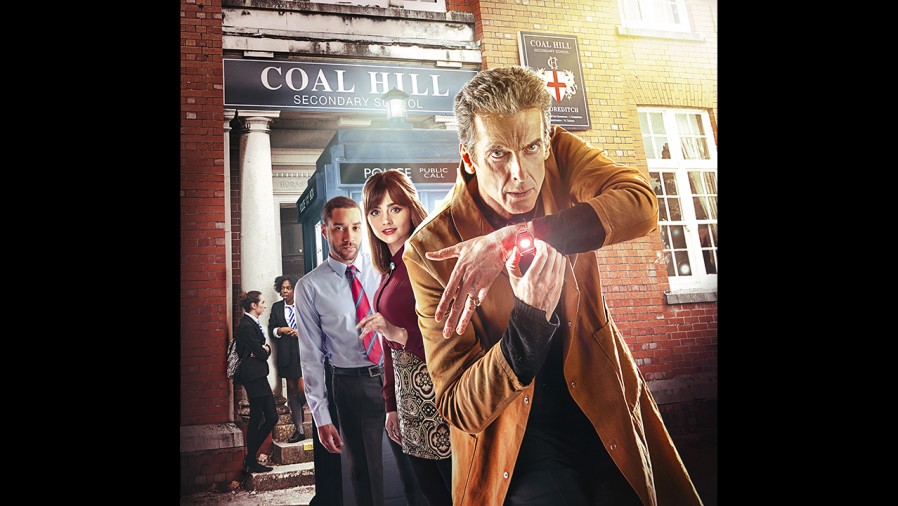 Doctor Who: The Caretaker

This week’s episode of Doctor Who can be forgiven for a somewhat unexciting monster, because it finally forced Clara to reconcile her normal life with her time-travelling one.

For the past several weeks, Clara has juggled her budding relationship with Danny Pink with her time travelling with the Doctor. This was shown in a particularly memorable montage at the beginning of the episode as the double life takes a toll on Clara. This was one of my issues earlier this season: how can Clara go from wild adventure to casual date at the drop of a hat with no consequences? The answer is: she can’t. First of all, it’s emotionally and physically draining for her, and second of all, Danny isn’t an idiot. He knows something is up.

Having more Danny is definitely a plus on the show. It would be nice if he were upgraded to full time companion, and actually travel with the Doctor and Clara, but that seems unlikely, given the Doctor’s grudge against soldiers. The Doctor has always had issues with soldier, but it seems to be amplified this season. Before, he might not like soldiers as an extension of the military, but he could get along with individuals. Now, he writes people off without giving them a chance, being openly rude and close-minded to Danny without knowing him at all. It’s an odd choice to have the Doctor suddenly not being able to tolerate anyone with a background as a soldier, and such blatant and hostile discrimination seems very un-Doctorish. Every time it comes up, it stands out as bizarre. There needs to be an explanation soon, or it will continue to stick out in a bad way.

The Doctor and Danny fighting is a shame, because Danny seems like someone the Doctor should get along with. It is fitting that the one thing they come together over is Clara and her safety. It mirrors the Doctor and Rory’s relationship in season 5, when the Doctor was rude to Rory and mocked him because he didn’t think Rory was good enough to Amy. Rory refused to be intimidated and Amy made it clear that she chose Rory. It would be nice if Danny could have a similar arc. Although, it would be even nicer if the Doctor didn’t think he was entitled to vet his companion’s boyfriends. He told Clara that while she had explained him to Danny, she had yet to explain Danny to him. It wasn’t a fair comparison. Danny had a right to an explanation, because his girlfriend was secretly travelling the universe behind his back, which inadvertently put him in danger. Clara made no secret to the Doctor that she was seeing someone, he was just never particularly interested in the details. He even wholeheartedly approved, when he misunderstood thought Clara was dating another one of her colleagues, and wasn’t interested in knowing more. It was only when he realized he didn’t like her boyfriend’s work history that he got angry and demanded an explanation. The fact that he thinks he has such a say in her love life comes across as overbearing, if not also creepy.

Luckily, Clara stood her ground and defended Danny. Things were made slightly better when Danny helped save the planet, which earned him some respect in the Doctor’s eyes. It’s not fair that Danny has to ‘prove’ himself to the Doctor as being worthy of Clara – that judgement should be Clara’s, and Clara’s alone. But it would be nice if the two most prominent men in Clara’s life could just get along. Nice for Clara, and nice for the audience.