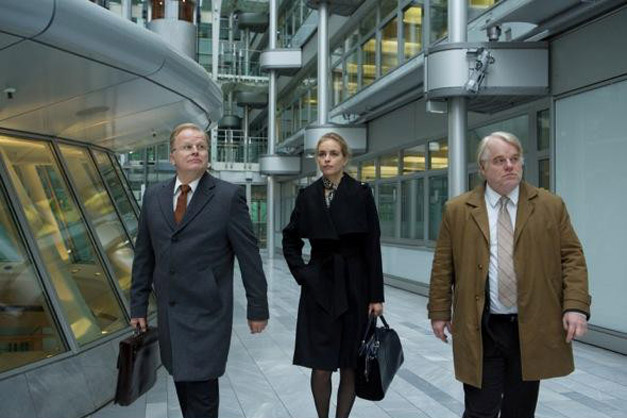 A Most Wanted Man

At the halfway mark of A Most Wanted Man, I felt decidedly… sleepy. I saw it almost on a whim, on a Sunday morning when I’d already seen all the summer blockbusters and wasn’t quite ready to watch Guardians of the Galaxy again. I didn’t know the plot, or anything beyond that Phillip Seymour Hoffman was in it. And it felt like a prototypical spy drama: painfully serious and full of put-on foreign accents, lingering shots that are meant to convey something deeper, and a vaguely political tone.

But somewhere around the 2/3 mark, I realized I was watching one of the most human spy dramas I’ve ever seen.  For one thing, the movie’s spies, as portrayed by Phillip Seymour Hoffman and Nina Hoss, don’t look glamorous and smooth. It’s brute force ground work, all about banking transactions and security footage taken on low res cameras. And they’re motivations feel similarly grounded, a desire to do the best we can within a world that doesn’t really seem inclined to let them.

The central conflict of the movie centers on the arrival of a Chechen terror suspect, Issa (his exact past is never known, but suffice it to say the man would probably end up at Gitmo if the Americans get him). The movie plays with our prejudices in subtle ways that lose their beauty if over-discussed, but I love in particular the way it represents the Muslim man’s daily prayers as both a symbol of his otherness, a manifestation of his isolation, and a sign of his devotion that slowly transforms over the course of the movie.

When Issa arrives in Hamburg, Germany, he is immediately on Gunther Bachmann’s (Phillip Seymour Hoffman)  radar. Bachman runs a down and dirty spy agency, the kind that doesn’t exist with the local governments. Issa immediately meets up with a  young, vaguely middle eastern looking couple, who bring him to an amnesty lawyer (Rachel McAdams). The rest of the movie is a slow-boiling, grounded look at what actually constitutes espionage, as well as a even handed look at the strange intersection of tragedy, unrest, and heartbreak that can make up terrorism and lead to normal people getting caught up in the War on Terror.

A half-baked romance should probably cheapen the movie, and from an objective stand point it does, but the sap who hides inside me wants me to say that it also illustrates a point about universal humanity. The ending of the movie is tragic and heartbreaking, a stinging indictment against a system that favors easy answers over complicated humanity, the same complicated humanity that the movie has spent the rest of its two hour running time building. But it’s also an entirely believable ending, one that speaks as much to the audience’s fear and cynicism as it does to the characters.

A lot will be said about Phillip Seymour Hoffman’s performance, and it is predictably mesmerizing. His heavy set frame and near constant wheeze are offset by his quick intelligence and breezy charisma. He disappears into the role, even while being magnetic. But a lot of the praise for this piece should go to the careful character work done by screenwriter Andrew Bovell (and presumably carried over from the John Le Carre novel on which it is based), which is what made me eventually overcome my boredom with slow moving adult dramas to find myself fully engrossed in a heavenly accented spy drama.