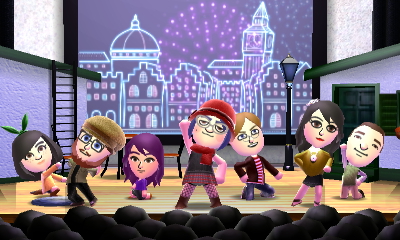 Tomodachi Life is a 3DS life/social simulator game, released in North America this past June.  It is a sequel to the DS title Tomodachi Collection, which was never retailed outside of Japan.  In retrospect, that is unsurprising, as even the localized game comes off as a bit oddball, and very, very Japanese.  I would hazard a guess that it has been the phenomenal success of the (somewhat) similar Animal Crossing: New Leaf in the past year that encouraged Nintendo to bring Tomodachi Life overseas.

It plays like a strange mash-up of Animal Crossing, the Sims, and Warioware.  You create mii characters to inhabit your island, each with their own apartment.  You watch over and monitor them, fulfilling their requests, giving them advice with their relationships, and playing minigames with them.  As their happiness increases, your funds increase, which allows you to buy clothing and food items to give your miis.  Miis form friendships, fall in love, get married, and may have children.  Growing your mii population – whether through babies or simply importing more from outside the game – opens up additional areas and buildings on the island, with various events and functions available throughout the day.

It is not really a game you play for extended periods of time, but one you’re more likely to check in on throughout the day, as there generally isn’t a whole lot to do at any one time.  Limited playtimes will hopefully keep burnout low – the gameplay tends towards the shallow and repetitious.  There are variations on perhaps a half dozen different minigame types that you play with your miis.  The stores only have between one and five available items a day, and they are not guaranteed to be new ones for your collection.  You also can’t actually direct your miis in any of their interactions; you must wait to be prompted for your input on major decisions (Should I become friends with this person?  Should I confess my love?), and minor relationship building activities happen both automatically and randomly.

It’s not that Tomodachi Life isn’t enjoyable, or that I don’t like it.  Playing benevolent god with avatars of friends, family, and fictional characters will always give me a petty thrill, and the miis’ shenanigans are amusing to check in on (spying on dreams is particularly surreal).   I just wish there was a little more, well, everything in the game.  More control, more customization, more variance.

The one part I‘d most love to see more of, and with much greater depth, is the concert hall.  Miis can learn eight different musical styles, and perform either solo with backup dancers, or in groups that know the same song.  Although the choreography stays the same, you can change the lyrics that the character sings.  I just found this feature super neat and fun to play with!  In fact, I’d love to have a game or app that builds off of the base idea: create characters, give them costumes, give them lyrics, give them choreography, maybe modify the melody a bit, and watch them perform.  Half of the players would be mangling their favorite songs to fit into one of the templates, and the other half would be composing new music and designing real life dance performances.  It would be beautiful.

In sum, Tomodachi Life is a quirky, casual game putting the player ostensibly in charge of a tiny island full of tiny people, which tastes best in small bites spread throughout the day.  And if the repetitive nature of the interactions burns you out, at least you can rest assured that there’s no penalty for skipping a few days of play.