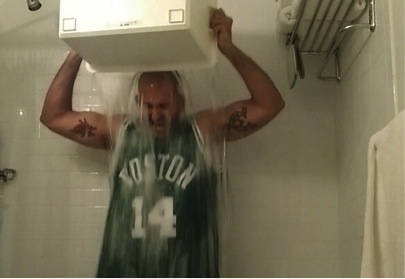 In Defense of Slacktivism

One of the beautiful things about social media is how quickly a concept can go viral. Whether its pictures of cats with quotes from Hocus Pocus ironically transposed over their faces, or stories about kidnapped Nigerian girls. We’ve created a space for ideas to swirl within our social circles and build up momentum.

Sometimes, that leads to misappropriation of ideas or frustrating memes with which we don’t agree (I’m thinking of you, #Idontneedfeminismbecause). But often it leads to a cool out pouring of support for causes that get people thinking in between all the baby pictures and descriptions of one’s daily activities.

A perfect encapsulation of viral do-goodery is the recent “ALS ICE BUCKET CHALLENGE” trend. You know it. Half your friends have done it. Maybe you’ve even shivered through it.

It’s actually a really cool challenge with a really great history. It was started when ALS patient Pat Quinn invited his friend, Pete Frates- a former Boston College baseball player who at the age of 27 was diagnosed with ALS (also known as Lou Gehrig’s Disease)- to take on the ice bucket challenge. Pete then posted his video challenging others to participate, and the stunt went viral. The Boston Red Sox did it. The New York Giants did it. The Boston Police Department did it.  The actual challenge is simple: either dump a big ole bucket of ice water over your head, or donate $100 to ALS research. When you post the video, it’s important that you mention that it’s for ALS Research (more on this later!).

ALS is a shity disease that affects nerve cells in the brain and spinal cord. It’s degenerative, and can lead to muscle weakness, loss of the use of arms and legs, and eventually problems walking, breathing and swallowing.  It is estimated that ALS is responsible for nearly two deaths per hundred thousand population annually, and about 5,600 people in the US are diagnosed each year. The life expectancy of those diagnosed is about two to five years.  Right now there is no treatment that has been proven to reverse course on ALS.

Wanna know why I know all that? #IceBucketChallenge.

Which is why I find what I will now describe as “facebook cynicism” so frustrating. There’s a desire, both in our generation and DEFINITELY in those who came before us, to write off the socially conscious efforts of Millenials. This makes sense. People aged 18-30 are pretty much insufferable in how earnest they are, annoying in how little responsibility they have, and damn near unbearable for how little their amount of “life experience” equates to the fervency with which they hold their beliefs. But it always cracks me up that the same people who criticize our generation’s facebook activitism aspire to the golden heights of 60s-style social consciousness. For every Martin Luther King or Gloria Steinem, there was a barrage of people who just thought long hair looked cool and loved flashing a peace sign. Activism is always 60% fashion, 10% ego, and (if we’re lucky) 30% action.

The blind cynicism, therefore, of pieces like the Huffington Post’s “#IceBucketChallenge: Why You’re Not Helping” is disingenuous, at best. While many social media campaigns can end up getting swallowed up in their own hype (Kony 2012 is a great example of this), they’re ultimately still getting people talking about the issues and researching the ideas at hand.

Take this paragraph: “Boom, posted- and all of a sudden you’re a philanthropist, spreading your charitable touch across your Facebook, Twitter and Instagram. Due to all of this, you’ve internally placed a monetary value on the cost of goods, the time spent and for posting on your social channels. This monetary value has little long term effect and next time you’re thinking of donating to a charity or for a cause, you might think back to that time you created a video.”

I don’t really know where to start, but let’s start with that dismissive wording. Don’t get me wrong: a lot of people are posting IceBucketChallenge videos because it’s cool (pun intended) to do so. But there’s nothing wrong with harnessing the power of cool to inspire change, knowledge, and donations. That’s been going on for centuries! And more importantly, studies have time and again shown that the idea that these sort of social actions TAKE AWAY from more substantial action is completely unfounded.

Let’s look at the numbers, just for the Ice Bucket Challenge.  Since July 29th, more than 71,000 donors have donated $2.3 million dollars to the national ALS association. That’s not counting the number of people who have researched the disease before dumping a bucket of freezing water on their head, and are now attuned to the disease, efforts to cure it, and the movement surrounding it.

It’s hard to put a concrete value on “raising awareness;” I think that may be why so many people are skeptical of it. But let’s look at another other case studies: HIV. Thanks to those Red Ribbon campaigns, which are pretty much the definition of low action social messaging (meaning that they don’t require a lot from people to let them be a part of the action), AIDS research, funding, and awareness have sky rocketed from the scary days of the 1980s. Great progress has been made in de-stigmatizing the disease, and even greater progress has been made in curing and preventing it.  Turning it into a “pop culture disease” has led to an insane amount of tangible progress.

In other words, decrying “slacktivism” as a bunch of entitled millenials wanting to look cooler in their facebook profiles is missing the damn point. What the people behind the IceBucketChallenge have realized is that on some level a lot of people want to do good for those around them. Taking down the barriers to doing good, creating easy donation pages and fun ways to spread awareness, isn’t taking away from other campaigns or substantive action; it’s adding to it, and on occasion, leading to it. Awareness can lead to life long engagement with a cause. It’s not going to happen for everyone – for some people, dumping a bucket of water on their head and getting a bunch of facebook likes is going to satiate the do gooder gene for the next year. But we were never going to make those people activists to begin with; we’re not getting rid of their socially conscious yearning, we’re allowing them a simple way to satiate it. For others, learning about the dangers of ALS will lead them down a path to greater fundraising and actions.

Each of these campaigns is ultimately its own beast, with pluses and minuses. It definitely requires a stringent messaging requirement, such as calling out when people try to get in on the trend without actually mentioning ALS and the cause behind it. And as socially conscious consumers, it’s our job to evaluate these causes every time they show up in our news, and more pertinently, in our news feeds. So here’s my evaluation: my being forced to endure all these goofy videos of high school pals dumping ice on their heads has led to a tangible surge in donations, a few lifelong obsessions with ALS, and a number of actual patients with ALS (like the aforementioned Pat and Pete) getting to see little nuggets of support from their communities. As Pete Frates’ wife put it, “ For us, even if people just see the ice bucket challenge and Google, ‘What is ALS?’, that’s a success, because that’s really all we can ask for.”

Slacktivism cynicism decidedly does NOT do any of the above things. It puts people down for trying to help, rather than providing avenues for actually putting that anger to good use. And it discourages people from trying unique and engaging ways of activating the public’s social consciousness.  Provide a dissenting opinion, sure, but it better be substantive if you’re going to try and offset donation statistics like that.

In other words, suck it cynics, the numbers speak for themselves.