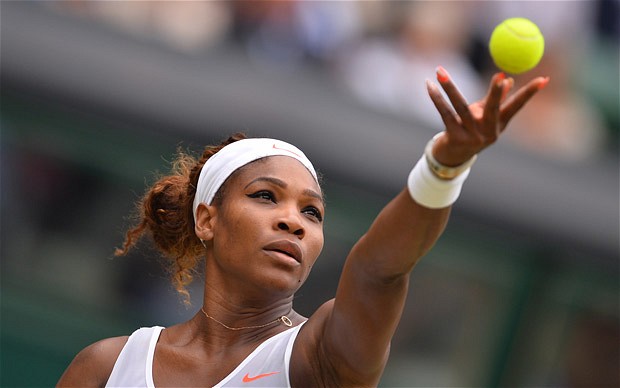 The historic Wimbledon tournament is widely known for its excitement and drama, and this year’s tournament was no exception. It’s been an exhilarating two weeks that culminated in Petra Kvitova winning a decisive straight set victory over Eugenie Bouchard for her second Women’s Singles Title. An then, on Sunday, we watched a rousing men’s final, where Novak Djokovic needed all five sets to hold off a valiant effort from former champion Roger Federer to claim his second Men’s Singles Title in the last four years. In laymen’s terms, it was a fantastic two weeks of tennis play.

Wimbledon 2014 had a number of up-and-comers on both the men and women’s sides that made names for themselves, and of course, there was its fair share of high-profile upsets, none bigger than Alize Cornet stunning Serena Williams in the third round. But that was just the prelude. Serena shocked the world again when she abruptly pulled out mid-match of second round doubles play a couple days later, citing a viral infection as the cause. The internet was buzzing with speculation.

Even with the great history of champions at Wimbledon, the precarious circumstances behind Serena’s play has dominated the tennis world. This was not only the number one player in the tournament but a five-time former Wimbledon champion, who should have her name permanently stenciled across centre court. She’s that automatic on grass. Serena is a once in a lifetime player and easily the most dominant player of her generation, yet this year’s version of Serena has been extremely vulnerable. That’s why no one was shocked by her early round exit from Wimbledon. If the Australian and French Opens were any indication, her play against Cornet was consistent with her play in the other two majors. Serena started out fast, cruising to a 6-1 first set win. But then, she completely cratered out. An accumulation of uncharacteristic unforced errors virtually gifted the next two sets to Cornet, facilitating Serena’s early exit from singles play.

We searched for any and all answers to explain Serena’s play; age being the popular hypothesis. Serena turns 33 in September, and by no means is that old, but it was the most logical explanation. A player coming to terms with her own humanity and having to find a way to win in spite of it. Had time finally caught up to what we once thought was an unstoppable winning machine? This is a woman that had a 78-4 record for all of 2013 but at a 26-5 mark already for 2014, something must be wrong. But then, Wednesday’s utterly bewildering performance and withdrawal from doubles play left us all scratching our collective heads. Were we witnessing an end of an era? It’s one thing for the body to slow over time, but if the mental part of the game is going too, the future becomes that much more muddled. In a game of strategy and adjustments like tennis, having that mental edge is what separates champions from the field of contenders.

Much like Martina Navratilova of her generation, Serena is unmatched in her blend of speed and power. Combine that with an unflinching determination to obliterate her opponents, and that’s what you call dominance. That’s also why she has 17 Grand Slam titles, the most amongst active women’s players. For us, the shock isn’t seeing Serena lose. It’s realizing that even for someone as super-human as Serena may seem, the body has its limitations. If a physical specimen like Serena can see her play decline purely because of her mental state, what does that mean for the rest of us?

A player’s psyche is a fragile thing, even for someone like Serena. And sometimes the will just isn’t there. That’s not to say it can’t be again. It just isn’t there now. It’s what can happen when you play at such a high level for so many years.

So, we should take a step back and understand what contributed to Serena’s condition. First, try to imagine the pressure a woman like Serena shoulders on a yearly basis. The expectations aren’t for her to just compete. The only goal is to win, year-in and year-out, and anything less than that is considered failure. That’s an awfully high bar to maintain, especially for a girl that started her professional career when she was only 14. That’s eighteen years of wear and tear on her body. Eighteen years of having to maintain peak physical condition. Eighteen years of having to keep yourself motivated and hungry to win. Even with the plethora of titles she has on her mantle, Serena hasn’t once faltered or showed any signs of complacency, until now. This is a grind that only the truly gifted can maintain. But, it’s still a grind, and it will eventually take its toll. In everybody’s life, there will always be that mental crossroads we must endure, and Serena is no different. Hers is just playing out on an international stage for all us to see. Adversity can either make or break you, and let’s hope for Serena it’s the former.

That’s also why I believe in Serena’s chances for a comeback. I’m a huge advocate in the power of the mind. Yes, mental blocks can derail you at times, but by overcoming those mental blocks, it makes our constitution that much stronger. For every negative, the mind can also propel to new and unexpected heights. I’ll go out on a limb and say that Serena still has a lot of good tennis left in her. Once she overcomes whatever’s ailing her, she’s going to that much stronger of a player because of it. For all we know, this year could merely be an anomaly and an otherwise stellar career. Going back to Navratilova, she won her last major at age 33, the same age that Serena will soon be, and even competed for a Wimbledon singles titles at the age of 37. She didn’t win it, but she proved that age is merely a number. The will to win can overcome any sort of limitations the body places on you. Adversity builds character and makes the will to win that much stronger. And that’s why you should believe in Serena too.