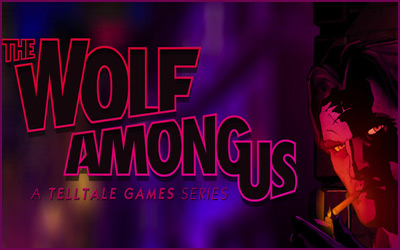 The Wolf Among Us: Cry Wolf

If you’ve ever been a fan of games like Mass Effect, Dragon Age, or Star Wars: Knights of the Old Republic, you probably love being able to choose your character’s destiny. What makes your character different than mine, is the way you answer questions and respond to the problems that you face. Some games let you build up a “good” persona or an “evil” one, and the ending usually reflects your moral decisions in some way. In Telltale Games’ latest series, The Wolf Among Us, you get to become the Big Bad Wolf and turn him into the type of character you would be if you were stuck in Fabletown as the furry beast.

Fables is a comic series by Bill Willingham that focuses on numerous fairytale characters that are forced from their world into ours. Fabletown, USA is a city where these characters live, disguising themselves with a magic called glamour. If you aren’t a human character and can’t afford glamour, you must go live on the Farm with the rest of the animals. Hiding the truth from humans (aka mundies) is of the utmost importance while trying to maintain a successful city and lifestyle for the citizens of Fabletown.

The Wolf Among Us starts before the comic book series does and thrusts you into the role of Sheriff Bigby Wolf as he tries to solve a murder spree and save Fabletown. Several women show up decapitated and it’s your job to discover who is behind these horrendous acts and put an end to their evil deeds. While you become a full-fledged detective and work alongside Snow White to discover the secrets of Fabletown’s villains, you must decide which type of character you want the Big Bad Wolf to be. You can either be the evil beast that shows no mercy and destroys those in his path, or you can be an honest Sheriff who cherishes his integrity and truly cares about the citizens of his town. The fun of this game however, is that you don’t even have to pick either of those options; you can tweeter on the edge of evil while maintaining enough “good” to make the right choices and become a hero, rather than the monster you were in the old world.

There are five episodes, with the finale being titled, Cry Wolf. The entire series has been a blast for me to play and experience, but when I installed the last episode and played through it, I was amazed. Not only do all the previous episodes finally make more sense, but every single decision you’ve made will come back to haunt or benefit you. The episode starts off with the most action of the entire season, as you start with a battle that leads to you chasing one of two villains. Which villain should you follow first? Did you make the right choice? If not, you can go find the other and punish him instead. How do you want to punish these villains for their crimes? Everything is put in your hands, and even though the outcome is similar for different players, the miniscule differences are what really shine in this finale.

After the amazing chases and fight scenes, Bigby ultimately puts the major villain on trial in front of the citizens of Fabletown that are still alive. Depending on how you’ve treated each of them in previous episodes and how you respond to questions from the villain during this trial, the outcome will be different. Luckily, my Bigby is an honorable man trying to make amends for the monster he used to be, and the citizens understood that and supported me right up until the end. When you spend hours and hours developing a character and experiencing his world the way you would if you were actually a part of it, seeing the consequences of your actions and the reactions of others is very satisfying.

If the journey and ultimate ending which were tailored to your play style weren’t enough to make you want to learn more about Fabletown, the cliffhanger at the end certainly will be. If you want to play a game that gives you the freedom to be the type of character you want to be while experiencing an amazing story and world, The Wolf Among Us is the next game you should be playing. What kind of Big Bad Wolf will you be?