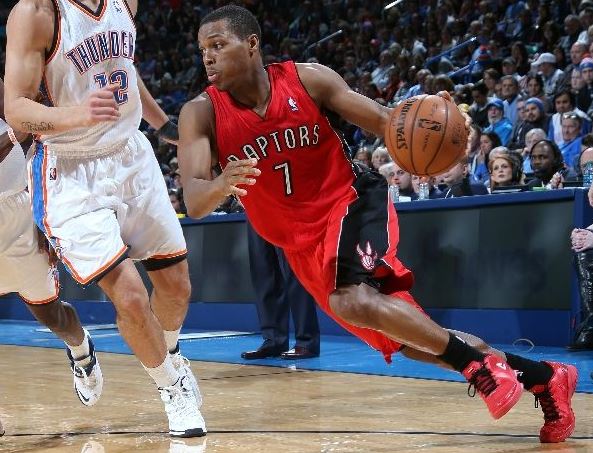 Even though I expected it to happen, I still can’t believe it actually happened.

When Kyle Lowry announced on Wednesday night that he would re-sign with the Toronto Raptors, he not only ensured that the team would get its best player back, but he helped dispel the notion that sought-after free agents won’t sign with Toronto.

And amazingly, the Raptors didn’t have to overpay to keep him.

Lowry reportedly rebuffed the Houston Rockets, Los Angeles Lakers and Miami Heat, choosing instead to stay in Canada, of all places. Granted, the Raptors offered Lowry a lot of money, but $48 million over four years doesn’t seem that steep a price for a player of Lowry’s calibre, especially when you consider the contracts awarded to the likes of Jodie Meeks and Avery Bradley.

It was more than money—Lowry wanted to stay here. And if his re-signing wasn’t enough to make fans swoon, surely the photo he posted of himself on Instagram wearing a vintage purple Raptors uniform was.

Sure, Vince Carter and Chris Bosh also re-signed with Toronto when they first had the chance, but the context was different for them. They both started their careers in Toronto, were loved by fans and re-signed after leading the Raptors to the playoffs. Lowry was traded to Toronto several years into his career and polarized fans after his first season north of the border.

He had a reputation for being hard to get along with and he lived up to it. He reported to training camp overweight in 2012 and was injury-prone throughout the 2012–2013 season. He was clearly displeased when Raptors coach Dwane Casey demoted him to backup point guard midway through that season, and he didn’t get his starting job back until Jose Calderon was traded.

But things changed in 2013–2014. Lowry reported for duty in excellent shape, had a career year and by all accounts was a model citizen in the locker room. Raptors GM Masai Ujiri challenged Lowry to be the player we all knew he could be, and Lowry proved his detractors—I among them—wrong by fully embracing the challenge. He was hands-down the Raptors’ MVP. His exclusion from the All Star Game was an outrage.

Cynics will say the only reason Lowry had a great season was because he was playing for a contract, but even assuming that was the case, what should Toronto have done? Let him walk away at the end of the season? Lowry is the best player the Raptors have seen since Chris Bosh. Retaining his services was crucial, not only to winning games going forward, but to proving to the rest of the league that Toronto can hold on to its star players. And doing so at a reasonable cost makes the Raptors eminently more respectable as an organization.

The reason the Raptors have almost always struggled to sign big-name free agents has nothing to do with the city of Toronto—it’s because the Raptors have almost always been a bad team. You don’t hear players slagging Toronto the way you hear them slagging Cleveland. Players have been loath to come to Toronto because the team sucked, but that’s changing, thanks in large part to Lowry.

The Raptors can change the league-wide perception of Toronto being an undesirable landing spot for free agents by winning games and holding on to star players. That’s the only way to continue to attract top-tier talent: prove that you can win, and prove that players want to stay here.

By re-signing Kyle Lowry, the Raptors have taken a huge step in the right direction.