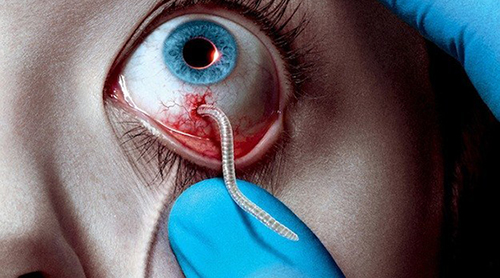 There were three reasons why I tuned in to the first two episodes of FX’s new series The Strain:

1)     Guillermo del Toro co-authored the book it’s based on and has writing/directing credits.

2)     Corey Stoll finally gets to headline a show. Stoll is definitely a rising star who had a fantastic breakthrough role in House of Cards. He also had smaller roles in Midnight in Paris and C.O.G.  Stoll does a great job of playing a likeable, yet flawed, character. Needless to say, I was super excited to see him as the hero Dr. Ephraim Goodweather.

3)     Horror TV. If done well, horror series can be really freaking good, and lately it helps to be on FX (see: every season of American Horror Story).

Give me a horror series directed by del Toro which stars Corey Stoll and I am in! Flash forward two weeks, and a few odd episodes and I’m still in…but not sold just yet.

Episode one introduces us to Eph Goodweather who is your typical protagonist. By typical protagonist, I mean that he seems like an all-together great guy that audiences can route for. He’s a recovering alcoholic in the midst of a divorce but heartbroken about it because it means less time with his son and wife, whom he still is trying to love. Really, Eph’s biggest downfall is that he’s a workaholic. I always have issues with shows that use work as a way of breaking apart a marriage. I get that it happens in real life, but Eph works for the CDC which is kind of an important job so his wife can suck it up. I digress.

The main action in the premiere centers on a plane which lands but no passengers exit. Eph arrives at the scene with his sidekicks: some annoying lady he’s having an affair with (Nora) and Samwise/Rudy (also known as Sean Astin, who plays Jim). Nora and Eph enter the plane to find all passengers seemingly dead. Four passengers suddenly awake and the CDC takes over the investigation. Turns out these weird worms are likely the cause of the deaths. By episodes end, the dead passengers rise up and have super long worm-tongues that eat blood.

There’s a complex side storyline about this giant coffin that contains some vampire/beast creature. Some old white guy planned for the box to be delivered on the plane and that old white guy has some other creepy guy helping him. It seems like the main villain of the series is going to be this big vampire beast. Professor Filch/Walder Frey also makes an appearance as someone who has a history with these old men and this beast thing. We’ll have to wait and see.

Overall, the premiere was somewhat engrossing and had a few welcome familiar faces (including Francis Capra aka Weevil!). Episode two faired a bit better than the premiere.  We learned that the surviving passengers of the flight are also infected with the worms, but they don’t all know it yet. Eph was banned from working on the case because the government is trying to cover it up and pretend there are no diseases spreading. Eph also had a long emotional rant at an AA meeting about his family (AA meetings are over-used in mediocre TV as a means of hearing a character’s inner monologue…I digress again). More confusing side stories happened with the weird old guy and master vampire.

I still have lots of questions, but I will likely continue watching.I have three main issues with the show right now. First is how likeable Eph is. Stoll is a great actor and he’s playing a pretty boring character so far. I like a little bit of edge to my heroes and he is just pure good. The show can keep trying to make me think that his alcoholic past and workaholic nature are character faults, but they really aren’t yet. Second, Nora needs to die. I’ve never disliked a female lead/sidekick so much.  I don’t think it’s fair to blame the actress since the way Eph is written also makes me dislike him a bit, but I’m really hoping they kill Nora off and bring in a new character to fill the female void of the show. I can’t even articulate why I dislike her. She’s just annoying and insignificant. My last issue with this series is the appearance of the vampires. In a post-The Walking Dead world, it’s really unacceptable to have living dead creatures that look so unrealistic. Maybe they’re going for the campy appeal, but I think the special effects crew could do WAY better.

My three qualms aside, I’m still hoping my three reasons for initially tuning in will shine through. I’ll definitely give The Strain a few more episodes but if they don’t make some major adjustments I have a feeling the series won’t be back for season 2.