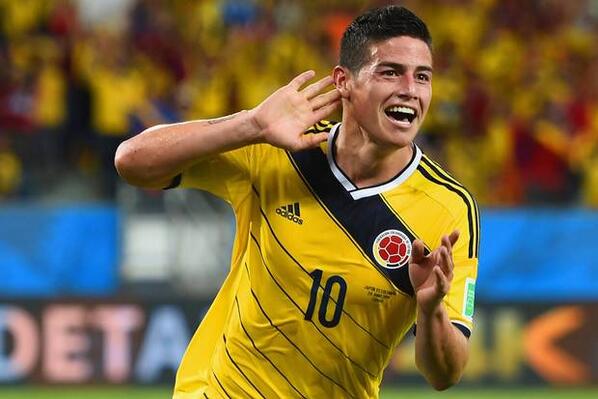 Every World Cup, people can usually predict who is going to shine for their team. We know with Argentina it’s Messi, who is constantly competing with Portugal’s Ronaldo for the title of being the best in the world. Rooney has had the pressure of being considered England’s best, while Didier Drogba is seen as the leader of the Ivorian squad, Robin Van Persie for the Netherlands – you get the point. The list goes on and on for each team, and we usually expect these people to out perform others.

With Colombia’s Radamel Falcao out, many people weren’t sure what to expect from the Colombians. We know they’re a decent team who can play some great football, as they’re ranked 8th in world (though as we’ve seen from this World Cup, the FIFA rankings mean absolutely nothing), but much of the country’s success has come from the Monaco striker, who scored nine goals in 13 matches during qualifications.

Well, ladies and gentlemen, meet James Rodriguez. Contrary to American commentating, the 22 year-old’s name is pronounced ‘Ha-mez’, not James. Though, after his performance over the last couple of weeks, I’m sure no one will be mispronouncing his name anytime soon.

The young Colombian has taken the world by surprise since his first game of the World Cup, where he assisted two goals and scored one. Not even at the quarterfinal stage of the tournament yet, and he is the top goal scorer thus far with five goals and two assists, ahead of predicted stars Messi, Muller, and Neymar, who all have four.

He scored both goals for Colombia on Sunday morning with their clash against Uruguay, including a screamer from outside of the box, which is regarded as goal of the tournament so far by many.

He’s too old to win Young Player of the Tournament, as he’s over the age of 21, but he could very likely win Player of the Tournament and the Golden Boot if he can keep up his form. The Golden Boot is given to the player with the most goals in the tournament, and while he won’t be the youngest player to ever win it, it will surely be a special one, as very few people rated him as a contender coming into this tournament.

With a performance like this comes opportunities, and that’s exactly what he’s seeing. He’s reportedly being offered deals by teams in England, which don’t mean much when he’s also reportedly being offered deals from Barcalona, Atletico Madrid, and Real Madrid. He has said that his preferred choice would be to move to Real Madrid, and the Daily Mail has reported that Madrid are close to completing his move from Monaco, but as you know if you follow club football, headlines from British media don’t mean anything until it’s official.

Rodriguez and the Colombians have to take on Brazil in their quarterfinal match on Friday, where we will surely see a great battle between no. 10s, Rodriguez and Neymar, who will both look to take their team through to the next round. I won’t be surprised if it is the winner of this game that wins the World Cup, and their respective no. 10 who takes home the Golden Boot and Player of the Tournament.