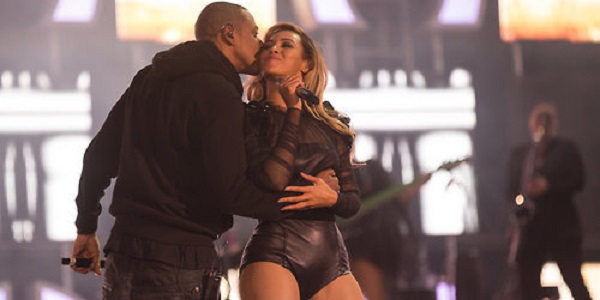 As the smell of weed wafted through the air, the lights dimmed, and Beyoncé and Jay-Z took the stage at Gillette Stadium.  The two walked out with one of their first musical collaborations “’03 Bonnie & Clyde.”  The duo was perfectly in sync and rocked out the start to one of the most fun concerts.

While I am more of a Beyoncé fan, and was there mainly to see her, the show was a two person act.  Beyonce rolled out with “Upgrade U” “Crazy in Love” and then you got some “N—as in Paris” and “Tom Ford from Jay-Z.

I have only been to two concerts which involved rappers, one was the TRL tour, and yes there was a tour, with Nelly and Eve.  The other was a concert at Northeastern University which also had Nelly, so needless to say this was a breath of fresh air.  While I am not Jay-Z super fan, I know most of his music, and could sing along, although not to everything, but Jay put on a fantastic show.  “Tom Ford” and “99 Problems” were his best performances.

There were also lots of duets between the two because they have worked together on numerous projects throughout their musical careers.  The highlight of their duets was Beyoncé taking on the Justin Timberlake part in “Holy Grail” which added so much to that song.

Then came my girl Queen Bey, from her fantastic dancing to her great numbers especially a cover of Lauryn Hill’s “Ex-Factor,” “Flawless,” and “Pretty Hurts.”  Beyoncé is at that stage in her career where the music mixed with the performance is something to be marveled.  Beyoncé puts on a great show; she knows her fans, and she and Mr. Carter know how to put on a show.  That was no dig at their marriage, although…

The Carters put on an impressive over two, perfectly choreographed, with a moving tribute to their life and marriage throughout through video.    My only minor complaint would be that I wish these two would have slowed things down once or twice, allowing you, and the show to take a breath.   “Halo” felt quick, and I would have loved to see them both slow down with one or two performances each.  There is no slowing down the most powerful couple in all of media, with 43 tracks covered these two are on fire, and there show was great.