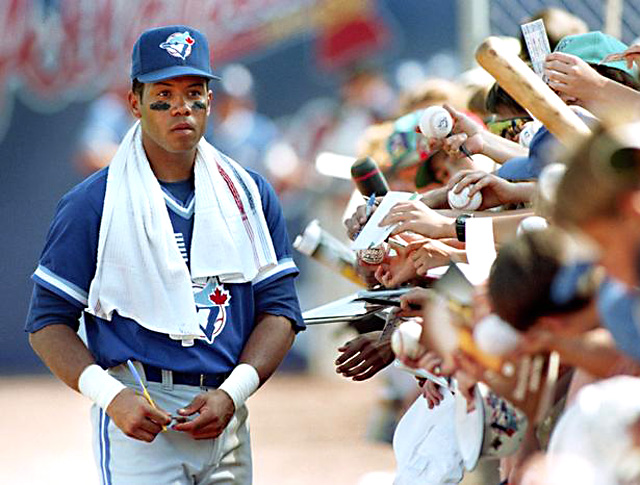 Who Was Toronto’s Best?

It’s a debate I’ve had with my friends a countless amount of times. “Who was the best pro athlete ever to play in Toronto?”

This is a really hard question to try and figure out. The answer certainly isn’t all that obvious in Toronto’s case as opposed to other cities in North America. This isn’t a city like Edmonton (Wayne Gretzky) or Chicago (Michael Jordan) we’re talking about, where there is a clear cut “best athlete to ever play there”. Toronto hasn’t had a talent of the likes of LeBron James or Sidney Crosby play for a team in Ontario’s capital. So the question begs asking, who was Toronto’s best?

Well, let’s not mess around and get the debate started. Here are a few candidates (in no particular order) to hold the crown of Toronto’s Best.

Alomar might well be the consensus pick to be Toronto’s greatest ever athlete, largely due to his induction into the Baseball Hall of Fame in 2011. He didn’t spend a large amount of time in Toronto – 5 seasons in total with the Blue Jays – but he certainly made the most of it. He was there for Toronto’s two World Series championships in 1992 and 1993, he won a Gold Glove in every season he played for the Blue Jays, and he was the 1992 ALCS MVP.

Let’s talk about that 1992 ALCS for a moment, as it provided us with what would be Alomar’s defining moment as a Blue Jay. The Blue Jays were going up against Tony La Russa’s Oakland Athletics, with the winner receiving a birth in the 1992 World Series. In Game 4 Alomar took centre stage, with his impact being felt most late in the game. Oakland had the unhittable Dennis Eckersley trying to close out the game with a 6-4 lead in the top of the ninth. He had taken the mound in the previous inning, and La Russa stuck with Eckersley for the ninth as he felt his star closer was his team’s best chance to win the game and tie the series at 2-2.

As Devon White led off with a single and advanced to third on an error, Alomar stepped up to dish. He promptly lined one of Eckersley pitches towards right field and over the wall for a game-tying home run, and the Blue Jays would go on to win the game in the 11th inning. This would prove to be the biggest game of the series, as Toronto took a 3-1 series lead and would go on to win not just the ALCS, but their first of two World Series championships. And as we know, Alomar won ALCS MVP for his clutch efforts.

Going down as one of the greatest second baseman in the history of the game, Alomar may have the strongest case of being Toronto’s best professional athlete. But who else can hold a light to Alomar’s impressive Toronto-based career?

If Roberto Alomar isn’t the greatest player ever to don a Blue Jays uniform, then it surely must be Roy Halladay. While struggling near the beginning of his career and known for having a very withdrawn personality, he quickly established himself as the most intimidating pitcher in the game in his time with Toronto. Yet, he struggled so much as a young pitcher coming up through the system that Gord Ash, former Blue Jays general manager, took heat for not trading Halladay as a prospect.

“He was not somebody that we were prepared to give up on at the time. I can remember sitting in meeting rooms and being told that we needed to trade him. One of the best things that I learned from Pat (Gillick) is that you have to find ways to make things work.”

With a 148-76 record as a Blue Jay, “Doc” was known for pilling up complete game after complete game with relative ease. He won the Cy Young Award in 2003 (he would win another in 2010 with the Philadelphia Phillies) and made six all-star game appearances as a member of the Jays. However, persistent back problems forced the Colorado native to call it a career and last year, he signed a one-day contract with Toronto to officially retire as a Blue Jay.

While Halladay left Toronto “the right way”, Vince Carter’s departure from Toronto was far from “right” if you ask Toronto sports fans. But today, let’s focus on Vince’s time in Toronto as opposed to his departure, as his impact on the city can still be felt today.

A Raptor from 1998 to 2004, Carter put Toronto on the proverbial map in the basketball world. His 2000 Slam Dunk Contest performance will forever be engrained in our minds as both otherworldly and superhuman. His ability to score with flair and finesse at one moment, and then with power and authority the next drew fans into the Air Canada Centre at a rate like never before, with everyone getting caught up in “Vinceanity”. Leading the Raptors to three straight playoff appearances from 2000 to 2002 helped his cause as well.

And while he was controversial off the court and had a shaky relationship with Raptors management, his impact on basketball in Canada is still being seen today. All that needs to be looked at is the growing Canadian talent pool of its young basketball stars, which contains Andrew Wiggins, Anthony Bennett, Tyler Ennis, Melvin Ejim, Tristan Thompson and much more. The list of evidence for the growth of Canada’s basketball potential goes on and on. Vince deserves a lot of credit for this recent wave of basketball fever which has consumed Toronto, as well as the entire country.

Fans were a little hesitant when he was named captain of the Maple Leafs in 1997, and they likely weren’t too pleased about how he left Toronto for Vancouver near the end of his career. However, there is no doubting that Sundin’s resume in Toronto is both extensive and quite impressive.

A Maple Leaf from 1994 to 2008, Sundin holds the all-time Maple Leaf team records for goals (420), assists by a forward (567) and points (987). On top of being an eight time all-star, Sundin captained the Maple Leafs to deep Stanley Cup Playoff runs on countless occasions and he established himself as the face of the franchise during his time with the club.

The Maple Leaf’s captain for eleven seasons, Sundin was a shoo-in to be inducted into the Hockey Hall of Fame in 2012. He was the Maple Leafs leading scorer for 12 of his 13 seasons with the club and was the first European player to wear the “C” in Maple Leaf’s history.

If you ask many – including myself – Keon is the greatest Maple Leaf of all-time, meaning we have to give him a due place on this list. A member of the 1986 Hockey Hall of Fame class, Keon played in Toronto for 15 seasons. In that time he amassed a remarkable line of work.

Keon won four Stanley Cups, making him the only player on this list other than Roberto Alomar to have actually brought a championship title to Toronto. In 1967, he won the Conn Smythe Trophy as playoff MVP, the last Maple Leaf to do so.

He also captained the Maple Leafs from 1969 to 1975, taking the captaincy from Maple Leafs legend George Armstrong. In playing over 1,000 NHL games in his career, Keon managed 365 goals for Toronto. He even won both the Calder Trophy as rookie of the year in 1961, as well as twice winning the Lady Byng Trophy as most sportsmanlike player in the league.

So I’ve clearly made the case for a few of Toronto’s finest. However, it’s important to realize that Toronto’s greatest athlete ever quite possibly has yet to fully establish their legacy. What do I mean by that?

Well, DeMar DeRozan reached new heights with the Raptors this season in becoming a first time all-star and in guiding the Raptors to a division championship. Who is to say that he won’t surpass Vince Carter one day as the greatest Raptor of all-time?

Jose Bautista is still smacking baseballs as far as he can for the Blue Jays, and it’s yet to be seen how his reputation will shape up when it’s all said and done.

Even Phil Kessel, far and above the Maple Leafs best player at the moment, has a chance to establish himself as a Toronto sports legend (yes, I said legend) if he can just manage to bring some future playoff success to the city.

While all of this is simply just a bunch of “what if’s”, one thing is certain. Toronto, for all the flack it gets as being a city that constantly houses losing teams year after year, has a rich professional sports history with a very bright future ahead of it.