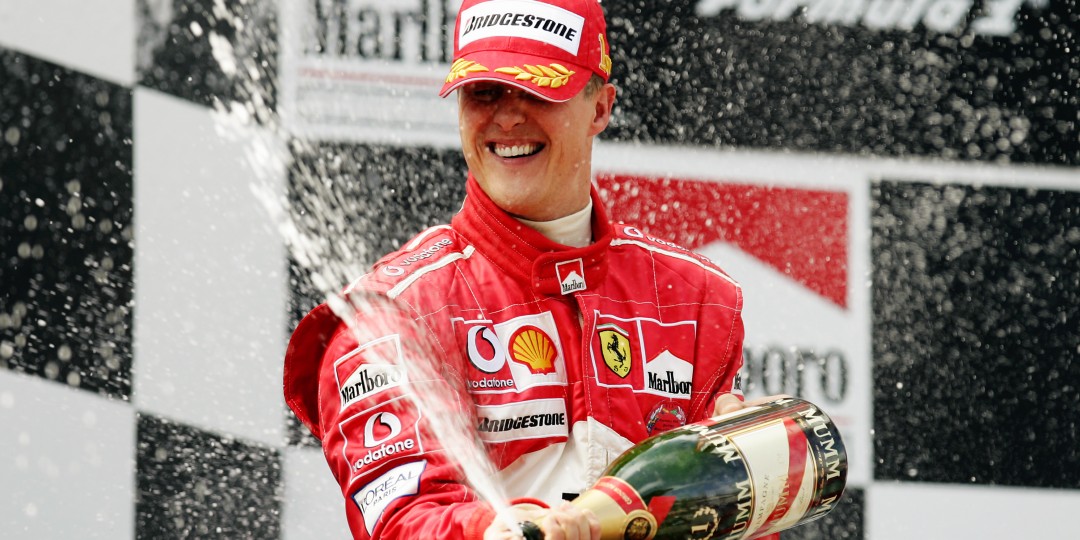 As the story goes, in 1973, German bricklayer Rolf Schumacher built a racing kart using an old motorcycle engine and his pedal kart. His son Michael, at the age of four, promptly hopped in and crashed it head on into a lamp post. From that point onwards Michael Schumacher began racing proper karts on formal racing circuits, quickly joining a karting club at the young age of six. Winning junior championship after junior championship, it was evident that the young Schumacher had a knack for living life at the fastest pace possible.

Climbing the ranks of grand prix racing as a teenager, he eventually got his big break in 1991 with an opportunity to compete in what is the pinnacle of auto racing, Formula One. Avid Formula One followers know that what would come next was history, as Schumacher began a career that would grow to become the most accomplished of all-time.

Yet, after watching Michael dominate his respective sport like so few have and establishing himself as a hero to many around the world, we nearly lost him. On December 29th, 2013, while skiing in the French Alps on a family holiday, Michael lost his balance while on a descent. Schumacher sustained a serious head injury after his head struck a rock as he crashed to the ground. Even though he was wearing a helmet, Schumacher’s injuries were life-threatening to the point where he had to be placed into a medically induced coma due to the massive head trauma caused by the impact – a state he remained in for nearly half a year.

Nonetheless, on June 16th, 2014, after many failed attempts to help Michael regain consciousness and with optimism regarding his survival fading, Michael awoke. Many who had already braced themselves to eventually hear the sad news of the legend’s passing – including myself – were relieved the find that Michael had in fact taken a step in the right direction after his terrifying accident.

After an impressive junior career, Schumacher got his chance to race in Formula One in 1991 as a replacement driver for Team Jordan. The driver he was replacing was Bertrand Gachot, who interestingly enough could not race as he was serving a prison sentence for spraying tear gas on a taxi driver in London, England. While Schumacher failed to finish his first race, the Belgian Grand Prix, he was signed for the remainder of the season by the Benetton Ford team. In 1992, he signed on as a fulltime driver for Benetton Ford where he would win his first career race in Belgium – on the same circuit where he made his debut the previous season – and finish third in the standings.

After finishing fourth in the standings in 1993, Schumacher broke through by winning his first championship the next year. That 1994 campaign was a season which saw him win eight races including a victory in Spain where he completed most of the race with his car stuck in fifth gear. In 1995, Schumacher was able to defend his reign as Formula One world champion, winning his second championship by 33 points over rival driver Damon Hill. At a ripe 26 years of age, Schumacher was already establishing himself as one of the greatest and most gifted talents the sport had seen, but his best years had yet come.

In 1996, Schumacher left Benetton Ford to join a struggling Scuderia Ferrari team. The team hadn’t seen one of their drivers take home a championship since 1979 and had fallen behind many of the top class outfits such as Benetton and Williams with regards to the development of their cars. For instance, the Benetton and Williams teams had recently equipped their cars with lighter V10 engines, while Ferrari was still using their more powerful, but heavier V12’s which would frequently produce slower lap times. Nevertheless, Schumacher began his quest to turn around the once legendary Ferrari team. However, despite finishing his inaugural season with Ferrari in an admirable third place, he was disqualified from the 1997 standings after intentionally trying to cause a collision with Canadian Jacques Villeneuve in the last race of the season in an effort to knock Villeneuve out of championship contention.

After a solid 1998 campaign and a 1999 season which saw him suffer a broken leg in a high-speed accident at the British Grand Prix, the turn of the century saw a power shift in Formula One. After Finnish driver Mika Häkkinen – Schumacher’s biggest rival throughout his career – won the previous two championships, Schumacher entered into the most successful stretch of his career. From 2000 to 2004, Schumacher won more races than anyone else in the history of the sport. More importantly, Schumacher’s dominance saw him win five championships in a row, an unprecedented achievement that brought him up to a record total of seven Formula One championships.

After subpar 2005 and 2006 seasons (by Schumacher’s standards), Michael confirmed that he would not compete in 2007, choosing to retire from grand prix racing. At this time, many of his peers regarded Michael as the greatest Formula One driver of all-time. Even rival Mika Häkkinen heavily praised and respected Schumacher, as he was quoted in 2006 saying “If you take the overall picture then there is no doubt about Michael and what he has done in his career in F1. He has achieved something remarkable. I don’t think there will be a driver in the future who can beat that achievement for a long time, or maybe ever.”

Still, Schumacher could not stay away from Formula One forever as he thrived off the thrill of competition. After working as an advisor for his former Ferrari team, it was announced that Michael would return to the grid for the 2010 season, racing for the newly formed Mercedes GP team. While his results were not nearly as strong as they were during his time with Ferrari – only scoring one podium finish in three seasons with Mercedes – the Formula One world welcomed the return of “Schumi”. At the conclusion of the 2012 season, Michael announced that he would retire once again, this time for good, as he simply did not have the enthusiasm to compete in Formula One that he once did.  Michael said regarding the decision “I was not sure if I still had the motivation and energy which is necessary to go on. It is not my style to do something that I’m not 100% for.”

In reflecting on his impressive career, it is clear that Michael is a big reason why I and many others of my generation are Formula One fans. Hence, many of us have been holding our breath for the past five months as we waited to see if Michael would pull through. Now that he has, the attention turns to what is next for Schumacher. It is clear that there is understandably a long road to recovery still ahead of him. It is understood that people who suffer serious head injuries similar to Michael’s can often spend months, if not years in the recovery process.

Many fear that Michael may not be himself after the incident, and it has been said that the damage done to his brain may alter his personality and memory in an apparent way. He is currently unable to speak and the reality is that his overall health still hangs in the balance. Nevertheless, he has the teeming support of those around him, both directly and in spirit. To that degree, current Mercedes driver and 2008 Formula One world champion Lewis Hamilton said recently “It’s really positive to hear there is some progress. To hear he is now really in that wake-up phase is really, really encouraging.” Ferrari’s Head of Communications Renato Bisignani added “My reaction is one of overwhelming joy. There is not one day when we haven’t thought of Michael, followed his progress and remembered him.”

As for my own reaction, it echoes that of many. I am thrilled that the man who sparked my interest in autosport and provided so many thrilling moments for me as a young Formula One fan now has a real chance to survive his terrifying ordeal. His extraordinary 19-year Formula One career aside, he has been a role model to many as well as being an active philanthropist throughout his life. He is a top-class human being in the books of those who know him, and it is with much delight that we are now able to utter the words which many feared we might not be able to… “Welcome back, Michael.”