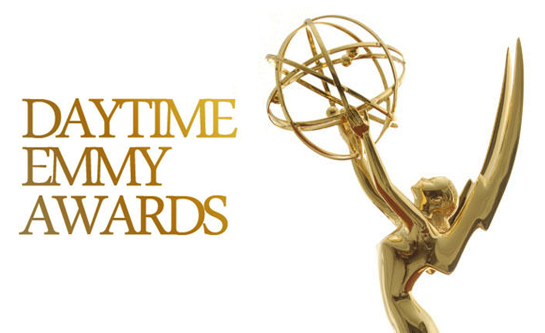 Kathy Griffin was the perfect person to host a streaming award show!  First and foremost Kathy started out Sunday night by making fun of last years show on HLN, especially the people at her table, and the hosts.  Kathy first starts to talk trash about Bethany Frankel who didn’t want to be at last year’s ceremony, and of course Kris Jenner.  Kathy then talks about a soap starlet who got drunk and wasted in the bathroom.  Kathy’s opening was great, it tied to the Daytime community, and went on par with her shtick, way to make something funny without singing a country western ballad like Robin Mead from HLN last year.

After the monologue, came the Best Supporting Actor and Actress in Drama categories, presented by Billy Bush, who was actually funny, and took a great jab at TMZ.

Eric Martsolf who plays Brady Black on Days of Our Lives won the Supporting Actor in a Drama Series.  Martsolf gave a gracious speech attributing most of his success to veteran Daytime actress Eileen Davidson.  Martsolf is quite charming, and has grown as an actor.

In surprising upset Amelia Heinle who plays Victoria Newman on The Young and the Restless won Supporting Actress in a Drama Series.  Heinle has played Victoria for nine years, and while I have never felt that she has captured the character started by five time Emmy Award winner Heather Tom.  Heinle has however grown in the role of the years, and her touching dedication of her win to her sister battling cancer was sweet!

Outstanding Game Show Host went to Steve Harvey for The Family Feud, Harvey is hilarious, and this is first win as host of the Family Feud.  Outstanding Talk Show Host was a tie, Dr. Mehmet Oz for The Dr. Oz Show, and Katie Couric for her cancelled talk show Katie, neither was present.

Kathy Griffin came back making fun of the format and people feeling uncomfortable stating hilariously “It’s not even a real show it’s like twitter.”  Griffin also talked about an alleged conversation she had had with Sarah Michelle Gellar and Susan Lucci getting her fired, you could tell the audience who reveres their queen La Lucci was uncomfortable, but that’s what you get with Kathy, calm down Daytime!

Hunter King who plays Summer Newman on The Young and the Restless won Outstanding Younger Actress in a Drama Series.  King stated she was a bad public speaker but was adorable.   Chandler Massey won Outstanding Younger in a Drama Series for playing Will Horton, the awkward part of the win was that played a clip from his replacement.  Massey called out the production crew for that mistake.  Massey has won this award three years in a row, and has left Days to pursue his acting career outside of Daytime.

Outstanding Talk Show Informative went to The Steve Harvey Show, Steve was not present, but the producers accepted on his behalf.  Steve Harvey was a well liked man at this award show, and had a great weekend, his book turned film Think Like a Man Too was number one at the box office.  Outstanding Talk Show Entertainment went to The Ellen DeGeneres Show, this is the shows 7th win.

Outstanding Morning Show went to Good Morning America, and it may have been my favorite speech because the man who accepted was straight to the point, and thanked his five great hosts.

While many of the winners did not show up, do not blame this on the format, many nominees/winners in the non-drama categories have not shown up for the last few years.  The Daytime Emmy Awards finally added three Spanish Language categories for their morning shows.  Nuevo Dia won Outstanding Spanish Morning Show.

Outstanding Game Show went to Jeopardy, and the through out the idea of Kathy Griffin for Celebrity Jeopardy, do this and I will watch again!

Outstanding Entertainment Program was handed out for the first time at the Daytime Emmy Awards, and it was a tie between Entertainment Tonight (ET), and Extra.  The woman who got played off from ET was crazier than Jacquelyn Bissett at the Golden Globes.

After this Sharon Osborne came out dropped a couple F bombs, and made me laugh hysterically.  Osborn helped present Outstanding Lead Actor in a Drama Series to Billy Miller from The Young and the Restless.  Miller recently left The Young and Restless, and is the youngest person to win this award.  Outstanding Lead Actress finally went to Eileen Davidson for her role as Kristin DiMera for Days of Our Lives.  Davidson received a standing ovation from the room as she created two major characters for both Days and The Young and the Restless.  Davdison’s win was long overdue.

At the end of the night the Daytime Emmy Awards brought out the big guns from years past with soap siren Donna Mills who is currently on General Hospital.  Outstanding Drama Series went to Young and the Restless.

The format of streaming makes more sense for this award show, people got to say their peace with their speeches, Kathy Griffin got to swear, and they were able to show clips for all of the Daytime performers.  There were no stupid musical numbers, just straight to the point award show stuff.

The only problems involved some buffering points, where you could miss some moments, but the format worked.  I also missed the announcer who would say facts about the winners when they walked to podium, those facts are important.  The other problem was speeches, which lasted way; way, way too long, I am talking to you Entertainment Tonight woman. Yet overall the show was better than years past. Keep up the progress Daytime!