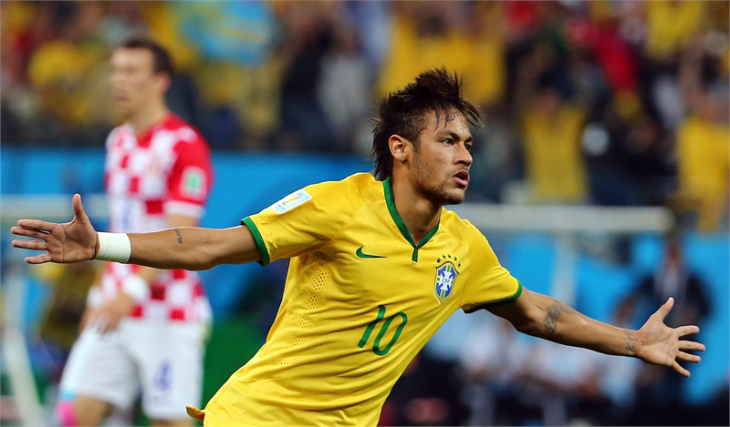 Every time the World Cup rolls around, one or two players tend to captivate the audience that is the millions of people watching across the globe. In Mexico 1986, it was Diego Maradona who was the man of the hour. Maradona single-handedly carried his Argentinian squad to greatness as Argentina took home their second World Cup title in their history.

The 1958 World Cup in Sweden saw one Brazilian player breakout on the world stage like no other before him and lead his nation to their first of five World Cup championships. His name was Edson Arantes do Nascimento, but we all know him as Pelé.

And who can forget England 1966 when an English soccer legend was born by the name of Bobby Moore. Regarded as one of the best English defenders of all-time, Moore captained his England side to victories against the powerhouse squads of Portugal and West Germany, and is still the only England captain to hoist the World Cup.

Despite all of these timeless tales of excellence and greatness, time does march on. While some phenomenal performances fade into the past, new masterpieces are waiting to be painted, with 2014 seeing Brazil as the extremely large canvas. Metaphors aside, those of us who are watching attentively as nations clash under the Brazilian summer sun will surely be treated with seeing another legendary performance from an exceptional footballer seeking glory for his nation.

It might come from a household name like Cristiano Ronaldo or Lionel Messi, or possibly a Brazilian hometown hero steps up to steal the show this year. It may even come from someone we could have never guessed would thrive in the pressure cooker that is the World Cup. But if you ask me, it will likely come from one of these five exceptional players. These men have a real opportunity to shine in Brazil, and here is how they very well could shine brighter than all the rest.

I know that I’m not taking much of a gamble here with my first selection, as there is no doubting that this tournament could very likely be remembered as the “Summer of Neymar”. A player with the potential to become the single greatest footballer on the planet one day (maybe sooner than most think), he is currently the face of soccer in the country where soccer is king.

Just as polarizing as the likes of Messi and Ronaldo, Neymar will be carrying great expectations on his young shoulders. Yet with a full season of playing alongside Lionel Messi at FC Barcelona this season, the development of his pace and ability to read the pitch has grown exponentially. The only real concern with him is his injury history, but the World Cup is not a marathon like a gruelling league season is. Conversely, many see it as a sprint, and if Neymar has his health on his side he will surely be seen torching defenses at an alarming rate with his home supporters roaring in the background.

Another important fact to make note of is that aside from last season, Neymar has played his entire career in Brazil. This is a Brazilian team who will not be fazed or deterred by the extreme heat like many of the European countries surely will be. Proof of this is the fact that Neymar led his Brazilian team to a FIFA Confederations Cup title just last year. That tournament was also hosted in Brazil. Needless to say, Neymar is a rather sexy pick to be tournament MVP and – surely more importantly to him – World Cup champion.

When talking about Argentina’s chances, the discussion often orbits Lionel Messi much the same way that you and I orbit the Sun. Yet, this year’s Argentina squad may find that their gem in Brazil will not be Messi, who often falters while sporting Argentine colours. The answer to Argentina’s success most likely lies in their midfield with Ángel di Maria.

Arguably the key piece to Real Madrid’s success this season, di Maria is one of the best midfielders in the world when it comes to seeing the field and exploiting the flaws of his opponents. Give di Maria an opening and he will claim it, either with a beautiful through ball to a teammate or with his legs which give him superhuman pace.

Endurance is another major plus with di Maria as well, which will come into play with the seemingly endless storyline that is the Brazilian heat. Having him play behind a projected front three of Lionel Messi, Gonzalo Higuain and Sergio Aguero – all world class players in their own right – this is a tournament in which di Maria can establish himself as one of the world’s best midfielders.

On top of a schedule which sees Argentina placed in a relatively easy Group F with Bosnia and Herzegovina, Iran and Nigeria, Argentine manager Alejandro Sabella can afford to limit di Maria’s time on the pitch in the group stage so he can burn the defenses of the more dangerous teams later in the tournament.

It just seems as if a rare group of athletes somehow find a way to elude father time. However it’s done, Andrea Pirlo should teach a class on the subject to the rest of us. He’s maintained his ability to play at the highest level due to being able to set up scoring chance after scoring chance for his teammates with ease. He truly is one of the best playmakers the game has ever been graced with. It is hard to believe that AC Milan let him go on a free transfer to Serie A rivals Juventus not so long ago.

The astounding thing with Pirlo is even at the age of 35, he does not shy away from the physical side of the game. Partner that with his incredibly high “soccer IQ” and it’s no wonder that Italy have been able to transform from being a team who typically got by on nursing 1-0 leads in past tournaments, to being able to score three to four goals per game effortlessly. Mind you, having a talent like Mario Balotelli constantly manhandle defenders upfront certainly helps with offensive production.

On top of all of this, we have not even touched on what is maybe the greatest asset of his game, his skill from set pieces. Bar none, Pirlo is the number one player I want taking a free kick for my team in any situation. His skill of finessing free kicks seemingly just out of the reach of helpless goalkeepers, coupled with his ability to pick out teammates from corner kicks is what may put his face on the cover of magazines across Italy, and the world, once this tournament is all said and done.

He may have missed a recent warm-up match versus Armenia on the 6th of June due to a lingering shoulder injury, but you can bet that it was only for precautionary reasons. As one of the world’s top goalkeepers, Neuer will be ready when Germany faces Cristiano Ronaldo and his Portuguese side on Monday in what will be the first match of the tournament for both teams.

Neuer will need to be in top form when he faces Portugal’s high powered attack led by the aforementioned Ronaldo, but if he can find a way to backstop Germany to victory it could be the start of a glorious summer for Manuel and the Germans.

In 2012, Neuer flourished on the international stage at the UEFA Euro 2010 tournament hosted in Poland and Ukraine. It was there where Germany faced Portugal in their first match, much like this year, and claimed a 1-0 victory. Neuer will look to blank the Portuguese once more in Brazil.

While that tournament saw the German’s bow out in the semi-finals to a retooled Italian squad, Neuer’s performance did not go unnoticed. He has since been regarded as the best German goalkeeper in the world, not to mention one of the best the world has to offer. With his aggressive play, sound footwork and strong hands, the 28 year old will look to take Germany one step further in Brazil, with many believing that he just might.

It seems like just yesterday when Wayne Rooney was regarded as a young phenom. It has now been ten years since the Liverpool native signed with Manchester United from Everton, and he has dazzled at Old Trafford ever since. Yet in his time with England national team, while he has still been capable of finding the back of the net frequently, Rooney has not been able to bring England to the top of the mountain just yet.

Despite this, perhaps 2014 is the year for England. In previous international tournaments, England has failed to meet the extremely high expectations set upon them by their supporters. It has seemed like every international tournament England has contested in since winning the World Cup in 1966, the English fans have expected their team to come out as champions. Yet in 2014 there seems to be a different feel with this English team.

Due to past failures, expectations are actually quite low for England this time around. Nevertheless, that may work to their advantage. Think back to the 2006 World Cup, where the Italians were crowned champions of the world for the fourth time. Just prior, Italy’s top tier league, Serie A, played host to arguably the largest match fixing scandal in soccer history. Due to that, pundits from across the globe assumed that the Italian side would be too distracted and the expectation was that they would hardly make it out of the group stage. However, being able to fly under the radar, the Azzurri blossomed and came out on top. Could the same happen for England in 2014?

If it does, it will be Rooney at the forefront. This could be his time to set all of England’s past failures aside and make this tournament his to dominate. There is no doubting that he is capable of doing so, as his impressive goal scoring statistics don’t lie. In 91 appearances representing his nation, Rooney has scored 39 goals. He is also coming off a club season which saw him score 19 goals for Manchester United, an improvement from last season’s 16 goal performance. If England can emerge out of a strong Group D, Rooney will have the chance to join the likes of Bobby Moore on the Mount Rushmore of English soccer.