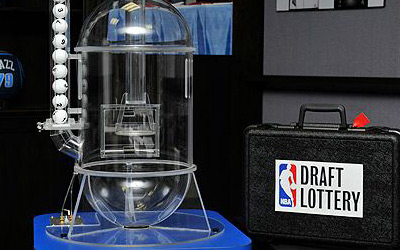 Did a UFO really crash in the city of Roswell, New Mexico in 1947? Is it true that the Bermuda Triangle makes ships and planes disappear? Was the moon landing just a hoax? Whether or not you believe in some of these wacky theories, they all have evidence to show that they could actually be true. The problem is however, that the evidence proving they are just myths is more overwhelming in most cases. Take your belief in superstition and conspiracy theories and throw it on the basketball court. Could there really be any of these crazy ideas floating around about our beloved basketball league?

Prior to the NBA Draft of 1985, the league had a system similar to that of the National Football League; the worst teams would get the best picks in the draft. This caused a problem that had to be remedied according to then commissioner, David Stern. During the 1984 NBA season, the Houston Rockets were accused of purposely losing in order to obtain the first pick in the draft. Stern reacted to this by instating a lottery that would toss the worst teams into a tumbler, leaving their fate to chance. Stern would then choose each team’s position by pulling out envelopes that contained each of their logos inside.

Basketball was in a bit of the slump in the mid 1980’s, so when the NBA conducted its first ever lottery, fans hoped it would lead to a revival of their favorite game. New York is one of the largest media markets in the US, so when they were chosen for the first overall pick, people were shocked, but excited. Adding fuel to the fire, it is claimed that the Knicks’ envelope was purposely damaged as to allow Stern to choose them for the top pick. This pick inevitably led to the Knicks picking Patrick Ewing that year, who would go on to become a legend in the league and lead the Knicks to an astounding fourteen straight playoff seasons.

The years have brought many more controversial lotteries, and the event has slightly changed over the years. Now, the teams are picked using numbered balls in a drum. The problem is however, that this is now done untelevised, leading to even more speculation that it is rigged. If a new legend-in-the-making was heading into the draft, which team would win the coveted top pick? When Ohio native Lebron James entered the draft in 2003, every team wanted a chance at selecting him.

The Cleveland Cavaliers ended up winning the first selection and chose James, who would leave the team years later in chase of a championship. After moving to Miami and dominating for almost four years, Lebron’s stock has skyrocketed and he’s been the face of the NBA since. That is another reason why people believe the NBA Draft Conspiracy is true and still exists today. After Cleveland lost James, they fell into obscurity but became the luckiest team in the league. Some believe the NBA is trying to revive Cleveland basketball by giving them the opportunity to build a solid team that Lebron could return to and bring home a title for.

This might sound like a stretch, even for conspiracy theorists, but it has facts and math to back it up. In the last four years, the Cavaliers have won the first pick three times. The one year they didn’t get the top pick, it went to the NBA-owned Hornets, and the Cavs ended up with the fourth pick. Was the plot to rebuild the Cavaliers for James interrupted briefly in order to give more value to a team that was looking for an owner? It wouldn’t be crazy if you believe that to be true, and I am almost inclined to.

Cleveland selected Kyrie Irving in 2011 with their first pick, Anthony Bennett in 2013, and with this year’s top pick, grabbed Andrew Wiggins from Kansas. This is a solid lineup to support an assault led by Lebron James and could bring plenty of revenue back to the city. It’s all about reviving soft markets in the media business, so a ploy by the NBA to help the failing cities is almost desired, if not expected. The recent news that James may be thinking about opting out of his Heat contract has even more people hopping on the conspiracy theory bandwagon. Maybe he’s making his way back to Cleveland to dominate for the next decade. Yeah, I doubt it too, but wouldn’t that be great?

Whether you believe a conspiracy gave the first pick to a team with a 1.7% chance to win this year or not, you have to consider the possibilities either way. Have many of the past lotteries helped revive basketball and bring revenue to faltering cities? Yes. Could it be a coincidence that these teams with low odds won the top pick during a year that their success was fundamental to the growth of the sport? It could be. Just digest all of this information and make a decision for yourself regarding whether or not you think this is a wacky conspiracy theory or a surefire conspiracy.