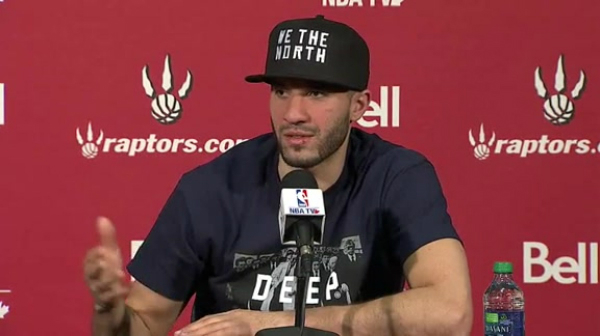 Either Greivis Vasquez hadn’t talked things over with his agent, or he just hadn’t listened.

Days after the Toronto Raptors’ season-ending game-seven loss to the Brooklyn Nets in the Eastern Conference quarterfinals in early May, players sat down for their exit interviews with team management. After that, they were trotted out one by one to answer questions from the media—their last team-related obligation of the season.

These interviews went as most interviews with athletes do—predictably. The questions were uninspired and the answers were cliché.

DeMar DeRozan talked about the areas of his game that need improvement. Terrence Ross was his usual bland self. It was mind-numbing enough for me to question why I was bothering to watch the live stream on the Raptors’ website. Was my life really so boring?

And then came Greivis Vasquez. But before I describe what Vasquez said (and what he wore), first, some context.

Vasquez was one of three key Raptors whose future with the team was—and still is—in doubt. He, Kyle Lowry and Patrick Patterson became unrestricted free agents at the end of the season. Raptors GM Masai Ujiri had indicated he was interested in re-signing all three of them, but that doesn’t necessarily mean he’ll succeed in doing so.

Lowry was by far the most valuable player on the team during the season. During his end-of-season press conference he gave no indication of whether he would re-sign with Toronto. He played his cards close to his vest, saying he’d have to consider a number of factors—money, the ability to compete for a championship, the impact on his family—before accepting a contract offer.

Lowry did the right thing. Better to stay diplomatic and noncommittal, then sit back and wait for the job offers to start rolling in.

It’s obvious that no one ever explained this strategy to Greivis Vasquez.

On the final media day of the season, Vasquez took to the podium wearing a We the North baseball cap. Actions speak louder than words, right? Actually, not in this case. Vasquez spoke louder than any action ever could. And he not only spoke louder, he spoke longer.

Vasquez talked for an astonishing 20 minutes, during which time he launched into a passionate speech about his love for Toronto. He went as far as saying that Toronto changed his life and recuperated his career. He asserted that if the Raptors remained intact, they could become the Oklahoma City Thunder of the Eastern Conference. And just in case you hadn’t clued in that Vasquez liked playing in Toronto, he said “I want to come back. I love Toronto. I love this city. I love this country. I want to be back.”

This is the stuff player agents’ nightmares are made of. Declaring your unwavering love and loyalty to one team above all others doesn’t do much for your value on the open market—or for your value in Toronto, for that matter. “You want to stay this badly? No problem—we’ll pay you the veteran’s minimum. Sign on the dotted line, please.”

Vasquez didn’t show much in the way of business acumen during his press conference, but what he did show endeared him to me more than any display of diplomacy could have. There is no denying Vasquez’s genuine passion for Toronto. That and his penchant for taking and making ballsy, audacious shots will make him a fan favourite in short order if he stays in Toronto. Give the man another contract, I say.

The biggest question mark heading into free agency remains whether Lowry will re-sign with Toronto. The Miami Heat have emerged as strong suitors for Lowry’s services, and playing in Miami has obvious advantages over staying in Toronto. But I think he’ll stay here. DeRozan seems convinced Lowry isn’t going anywhere, and I imagine DeRozan has insight into the situation that I lack. Toronto can also pay Lowry more than Miami can, and Lowry would be the star of the team if he stays put. Not to mention that Lowry came to Toronto last week to attend Masai Ujiri’s star-studded event celebrating the life of Nelson Mandela. I think the fact that Lowry came to Toronto of his own volition during the offseason was telling, and he clearly has a good relationship with Ujiri.

Don’t get me wrong, I want Lowry back in Toronto more than any other player. But that said, I will be disappointed if Vasquez isn’t back as well. I love his confidence, his passion and his apparent disdain for free-agent politicking. These aren’t necessarily qualities that win championships, but they win over fans. And I know that signing players for sentimental reasons is a disastrous proposition (I’m praying that the Vince Carter rumors aren’t true), but Vasquez was a key cog in the Raptors’ resurgence this year. The team could do a lot worse than re-signing him.