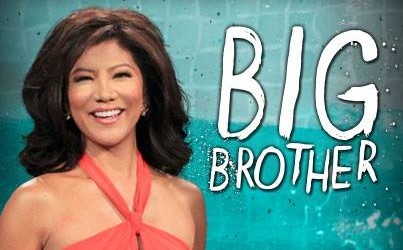 Big Brother returns in a few days for what’s sure to be another entertaining summer. In preparation for the premier, I spent my week doing what I do every year: assessing (okay hardcore judging) this year’s houseguests and new twists. The first big twists of season 16 is that there will be two Head(s) of Households, a new competition, and the possibility that someone can win HOH and still leave that same week. I’m so enraged by the aforementioned twist* that I’ve moved on to judging the characters. So without further ado, here are my picks for the houseguests likely to make the biggest splash this summer!

16) Jocasta –Not to be biased, but she’s a minister and proud of it. If she can separate religion from the game, she may stick around, but her bio clearly indicates a love of motivational speaking. I sense she won’t have too much in common with the younger crowd. That being said, Jocasta considers herself an outgoing person and acknowledges the social aspect of the game. Also, she wins some points for being one of the few houseguests who says she’d rather win and be hated by America than lose and be loved.

15) Paola- This NY DJ is a self-proclaimed people magnet who will miss two things most: friends and her turntable. Paola spends a great deal of time talking about how unique, dynamic, and hysterical she is. She comes across as an annoying, typical hipster. One of two outcomes is possible here: either she’s sent packing early or she floats her way to the midpoint. The only thing that could prolong Paola’s game is if she actually follows through with her plan of an all-girls alliance. That’s also the only thing keeping her out of my bottom slot (how come the ladies never want to align?!). One last note: anyone who types “haha” in their profile does not deserve to be on TV.

14) Nicole – When I first read Nicole’s bio, I instantly assumed she’d be my favorite houseguest this summer. She’s a cute, young gal who has a nerdy side and reminded me of Jordan. Unfortunately, her interview was a bit underwhelming. Her only strategy is to win the first HOH, which isn’t really a strategy at all. She also admits to not getting along with other girls. I’ll admit that females who surround themselves with men have a tendency to do well in this competition, but if you can’t get along with girls then you’re already isolating half the house. Regardless, Nicole could end up being America’s sweetheart.

13) Victoria- This photographer from Miami claims she’d rather be loved by America and lose then win and be hated. I don’t buy that for a second. If she sticks around, I’m calling Victoria as the villain of the season. Perhaps this is because she reminds me of Rachel Riley (but only Rachel’s awful qualities, and yes I do think Rachel has good ones). Perhaps it’s because she plans on manipulating houseguests with her looks. Perhaps it’s because she doesn’t watch the American version of Big Brother and therefore I’m bitter. Regardless of the reason, I just can’t see her being well liked. I can, however, see her stirring up a lot of drama, if she’s able to pull herself away from her cosmetics.

12) Caleb- As a rule, I never trust a straight man who lists The Notebook as his favorite movie. Caleb proves my theory by expressing his intention of turning on any possible showmance to get to the end. He seems to be the most strategic player thus far and even goes on and on about the bobber effect. In this self-planned strategy, Caleb explains that a hook makes a fish bleed but the bobber is what affects the hook. Basically, this is a complex metaphor that boils down to him manipulating others to do his dirty week. It’s a fine strategy since it’s helped players get fairly far in the game (oh hey Amanda!), so we’ll see how it plays out. Caleb could walk a fine line between being a cocky douche or a genuinely likeable guy.

11) Brittany- One rumored theory for this season is that the house will be split into two teams. One team would be those who are super fans of the show and one for those who are not. I’m beginning to think this theory could be a reality since there seem to be a few contestants who don’t even watch Big Brother. Brittany is one of these people. This is even more obvious when you note that her strategy is to not have a strategy until she feels people out. There is no real reason for putting her this high on the list other than the fact that she seems like a memorable character. Also, she reminds me of Blaire Waldorf. Okay, mainly it’s because of the Blaire thing.

10) Devin-  Handsome? Check. Family man? Check. Ex-pro athlete? Check. Charming? More checks. Devin just seems like a really genuine guy. If he plays down his competitive side, he could stick round for a few weeks. I predict he’ll make it to the midpoint, but will have little impact on the game. We won’t remember him in a few years.

9) Amber-  Devin and Amber will likely play a similar game. I see both being friendly and overall well liked. Amber has that tough girl vibe so she could stir up some drama. I keep picturing her and Devin as Howard and Candace from last season. I would not be shocked if they play in the same manner (ie. Not at all). Amber admits to being a  bad liar, which will be a huge detriment in this game; however, she also likes the idea of an all-girl alliance so I’ll give her the edge over Devin.

8) Derrick- It pains me to give someone who loves guns as much thought as a I gave Derrick. It also pains me when Big Brother tries to cast someone in a role created by Survivor (this is their solution to Tony). While Derrick’s strategy basically is “be a cop”, I still have an inkling that he will go fairly far in this game. He will not win. He’s a bit too boring to win, but this is the kind of guy I hate on paper who probably ends up being somewhat likable on TV.

7) Christine- Sounds like we have our super fan of the season! Christine also comes across as a bit boring, but I love me some strategy served by super fans. Hers isn’t a new strategy but it is one that hasn’t worked so well in the past: sticking with an alliance but having a secret final two alliance with someone from the opposing group. Christine loves board games and tends to win the so she could be a mental threat. I think she’ll be a bit of an outcast but hopefully in a quirky, adorable way. She may be the female version of Ian. If she can keep her giggle fits to a minimum, this girl could go far.

6) Frankie- Anyone coming from YouTube fame will probably do well in the house. I’m not saying he’ll be recognized, but you need to have some semblance of a likable personality to have a successful YouTube channel. Frankie also has a famous sister who I googled and have never heard of. He claims to be flamboyant and colorful which could mean a great ally for the long haul. If he bottles up his big personality, he too could go far. I’d love a Frankie/Christine alliance! Maybe he can be her secret ally for the final two. I also hate that I love that one of his favorite activities is twerking.

5) Donny-  I really wanted to hate Donny. If you look like you belong on Duck Dynasty, you’re generally dead to me. I realize that makes me a judgmental person…so be it. Donny won my heart over when his interview started with him saying he’d never been a beard person but it’s grown on him. Such classic dad humor, even though I don’t think he’s a dad. He continued to win me over with his genuine likability. I think America is going to love this guy. If he sticks around long enough, the houseguests will too and he just may win the game. That being said, we have another houseguest claiming to be a bad liar so maybe he isn’t cut out for it. He also says he’s most like Spencer, which makes me lose a little of my love for him.

4) Hayden –The surfer dude is typically not a character I enjoy in Big Brother or in life. Hayden may change my opinion on that matter. Hayden thinks his exterior will cause people to underestimate him and overlook his truly competitive personality. As a former college athlete, I suspect he’ll shine through at competitions. It also doesn’t hurt that he comes across fairy likeable. Hayden wants to be the type of player like former houseguests Hayden and Frank. I personally think a mix of those two sounds like an intriguing player that I would love to watch!

3) Cody-  As a single, good looking, guy’s guy, Cody will likely be loved by everyone. If anyone were to have a showmance this season, I would put my money on him. Honestly, there wasn’t much to Cody. He seemed a bit reserved but he somehow still impressed me. Mainly, his interview with Jeff Shroeder was incredibly entertaining since they both had man crushes on each other.

2) Zach – I generally dislike unemployed douchebags, but I am beyond excited about Zach. Clearly the biggest personality this season! Zach is motivated by one thing only: cash. He’s not afraid to play dirty and his favorite player is Mike Boggie. He definitely is a Chill Town wannabe. Zach is so damn cocky but he could end up being a cocky player deserving of his own self-obsession (Dr. Will!). I’m hoping he sticks around for pure entertainment! He’s going to be the villain we love or the villain we hate. Only time will tell!

1) Joey-  If you’re a female named Joey, I automatically love you. You can blame Dawson’s Creek for that fact. This Joey just came across as really fully in the I-want-to-be-your-best-friend kind of way. She makes jokes about being a lady lover but not a lesbian, and is afraid of not being able to poop in the house because men are nearby. It’s also refreshing to hear a female say she actually likes girls and isn’t one of those “girls are just jealous of me” types. Joey should have a killer social game. I’ll ignore the fact that she loves Ginamarie and pretend she’s perfect.

Let the games begin! I can’t wait until they all prove my first impressions wrong!

*The whole point of HOH is that the person is safe for a week! Why would you take away that safety!?! Now there is nothing to celebrate about winning HOH. It basically just means you’re a little bit closer to having power for the week. I love you Big Brother, but if Survivor took away the immunity idol do you think that would go over well? No. No it would not. Stop trying to fix something that’s not broken.