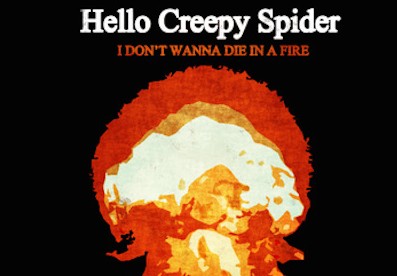 Sometimes everything just comes together at the right time, as it seems to be unfolding with Scottish punk duo Hello Creepy Spider (Matt Johnston, Stef Watt), whose album I Don’t Wanna Die In A Fire was just released May 12. With the frenetic energy of early punk releases, the duo takes their inspiration from bands like The Hives, The Ramones and Weezer.

The album features hook-driven punk tunes that clock in at less than 3 minutes apiece in a solid first effort. The tracks are driven by a tight rhythm section and growly guitar lines but also pay attention to the vocals with a nicely raw sensibility – a little nihilism inside of a tight punk/pop riff. Matt’s voice is varied and interesting enough to carry the short punk format with lyrics that cover the usual relationship stuff and social observations with a few clever lines. It would be nice to see them push that aspect in future work – the best punk lyricists are real poets.

Highlights include the title track “I Don’t Wanna Die In A Fire”. It’s solid musically and vocally, the lyrics leaving a strong impression; a clever and convincing song. Cassandra is a catchy punk/pop song with a sing-able chorus.

According to Matt, the whole thing came together as a result of happenstance.

“We’re been together properly for about a year. It’s the just two of us – me (Matt) playing guitar and Stef on drums. I was studying for a doctorate in psychology when I dropped out in 2012 in my last year to focus on music full time while I still could. I saw a local band not long after, The Murderburgers, although they’ve just been signed to Asian Man so calling them a local band now is kind of trite. They tore the place up and I decided to start a punk band.”

After putting together a couple of demos, Matt put out an ad on gumtree.com (the equivalent of Kijiji in the U.K.). The ad read something like: I want to start the greatest garage punk band in the world. If you can hit the drums hard as fuck and you have an attention problem that prevents you playing a song longer than three minutes max, call me. “It’s kind of embarrassing, but Stef really dug it,” Matt says. “Initially there was going to be a bass player, but I have an anxiety disorder that makes being around people very difficult sometimes. So we decided to just keep it the two of us,” he continues.

The band’s high energy sound doesn’t leave you with the impression that anything’s missing. It turns out that Matt’s technical ingenuity is the key to that fatter-than-a-duo sound.

“I came up with a cackhanded modification for my guitar that splits the signal in two so I can wire into both a guitar amp and a bass amp to fill out the low end we’d be missing if it was just regular guitar. The record doesn’t have any bass on it, not that most people would be able to tell. It was mostly recorded live in one take, and we dubbed a second guitar on it to help with the dynamics. I’m really happy with how big it sounds.

The initial idea was just to get a band together and play – anywhere – but after a gig supporting The Cadaver Club, the Northern Irish horror-punk band urged them to take it farther. Enthusiastic crowd reception quickly garnered them a series of new gigs, including one at the legendary King Tuts Wah Wah Hut in Glasgow. “I’ve seen so many bands there, so many bands that are hugely important to me – Brand New, Saves The Day, etc. It feels scary as hell to be playing on that stage,” Matt says.

The record came about as a result of a random offer from buddy Kevin Harper. “Kev let us just bash through everything in one take, vocals and all, with barely any overdubs and we ended up with ‘I Don’t Wanna Die In A Fire’ after a few hours.”

“The reaction has been amazing so far. There’s a lot of my anxiety on the record, and people have been really responding well to the honesty of the tracks.”

After the album release, they have video releases planned for “Hey Hey! Alright!” and “Style Icon” and then more gigs during the summer. Future plans include another CD next year and possibly a Christmas CD. “We have a cover of Elton John’s Step Into Christmas that’s a lot of fun so I want to get that out there,” he says. The fast pace of recognition has been dizzying. “There’s been a label sniffing around that might be able to help us figure out where to go from here, but so far things have been mental. We’re incredibly surprised and proud of what we’ve gotten done in the last eight months.”

Check out the release at: http://hellocreepyspider.bandcamp.com/releases