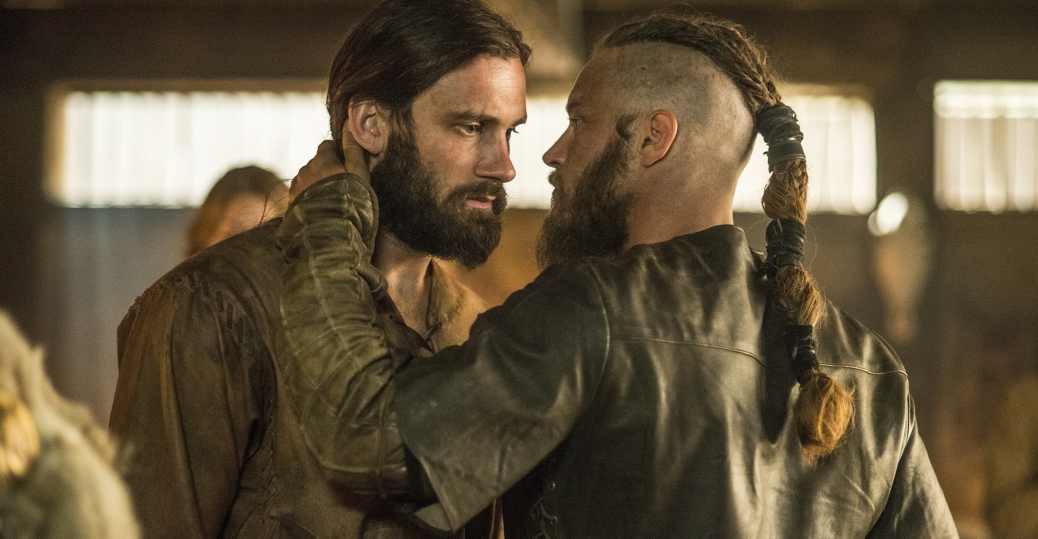 While last week’s season premiere of Vikings focused heavily on domestic spats, this week branched out more, literally, as Ragnar lead the Vikings on more raids. The episode picked up four years after the first episode, and did a surprisingly good job with the time jump, which is usually a difficult feat.

For most of the characters, it didn’t feel like there were any glaring blanks that couldn’t be filled in. My one complaint is I wish we had seen more of Athelstan’s development. Obviously they couldn’t alter the show’s course for one character, but Athelstan’s journey is one of the show’s most interesting. The first season saw him go from innocent monk, to Lothbrok family slave/babysitter, to being semi-acclimated in the Viking community. In season 2, he seems to be even more ingrained with the rest of the Vikings, even deciding to go with Ragnar on a raid. It would have been nice to see a little more of the transition.

George Blagden’s portrayal of the conflicted ex-monk is still one of the best parts of the show. He does a compelling job conveying Athelstan’s internal crises. He might not be a monk anymore, but his Christianity is still ingrained in him on some level, despite his claims to the contrary. Blagden seamlessly altered between the physicality and brutalness of the fight scenes, and quite moments of contemplation after Athelstan took a man’s life to save Ragnar. Athelstan doesn’t quite fit in anywhere any more, and watching him invade his old homeland in the coming weeks is going to be amazing. For the audience. Probably not so much for Athelstan.

One of my biggest complaints for the show overall, is something I noticed last season. If there is an episode with an Athelstan heavy storyline, a lot of times it means the episode is Lagertha light. Lagertha wasn’t in this episode at all, which isn’t surprising, since she divorced Ragnar just last week. But still, she was missed. Especially since Ragnar’s new wife is just so unlikable.

A lot of the reason Aslaug is unsympathetic is the way she was introduced in season 1. She decided to pursue Ragnar, even though she knew he had a wife and a son, who was by the way right there as she was seducing Ragnar. In this episode, Ragnar flirted with one of the servant girls, to his pregnant wife’s dismay. He hit on a servant girl (Aslaug is also really classist, which is a little ironic, considering her husband’s humble roots). Aslaug, I’d like to introduce you to my friend, karma. She’s kind of a bitch. If Ragnar was unfaithful to his first wife, it shouldn’t be shocking he’s checking out other women this time around. Inexcusable, but not surprising. (Also inexcusable, Ragnar: flirting with other women and then telling her wife she’s paranoid because of pregnancy hormones. How did you get two women to agree to marry you? )

The other problem with Aslaug is they keep referencing her famous parents. Having interesting parents doesn’t mean you are interesting. It just means your parents were. Now that Ragnar has left his family to go raiding, maybe it’ll give Aslaug things to do that don’t revolve around her husband, which could be good for her character-wise. She’s only really gotten a chance to be the other woman/the jealous wife, neither of which are traditionally likeable roles. One unlikable action shouldn’t condemn a character forever, and since Aslaug seems like she’s going to have a big part on the show, I want to like her. So far, Aslaug has been characterized a lot by her relationship with Ragnar, and her parent’s legacy. Hopefully in the coming episodes we can find out more who she is and she can come into her own. It took a while for Siggy to grow on me, so maybe it’ll be the same with Aslaug.

I don’t know when I started liking Siggy, but I do. She’s smart, ambitious and manipulative and does a lot of sketchy things to achieve her goals. But at least she has clear goals, and we have a good idea of who Siggy is and what makes her tick. She might do some pretty awful things, but she does them well. I still wish she had packed up and left with Lagertha last week, and they could have bonded further over the fact that they are way too good for the Lothbrok boys. It’s hard to believe Siggy has stuck with Rollo for four years. She could do better, even though the writers seem to want to redeem Rollo.

Rollo’s storyline seems repetitive. Last season, every time he did something nice, two seconds later he turned around and did something deplorable. He’s had more chances than anyone deserves. There’s no reason to trust him again. When Ragnar asked why he should trust him, Rollo said because he asked him to. That’s not a reason. At least, it’s not a good reason. Apparently it was good enough for Ragnar though, because he said he forgave Rollo. Even though Rollo never technically apologized for betraying his family and village.

Siggy had a good point when she said women should stick together. And rule. Because right now, it seems the women of Vikings are the only ones with their acts together. Then again, if the ladies of this show were given power, there would be a lot less conflict. In episode 1, a war between King Horik and Jarl Borg was averted when they called a truce and agreed to go raiding with Ragnar. In this episode, King Horik decided to break that peace and make Jarl Borg stay behind. Not only that, but he did the mature thing and made Ragnar tell Jarl Borg he was uninvited to the pillage party. I’m sure that’s going to end well.

The upside is, Horik’s poor decision making skills probably means more fight scenes, and so far, they’ve had really good fights. Each fight feels intense, and the choreography and terrain are varied enough that each fight also feels unique.

Speaking of terrain, the scenery in this episode was gorgeous. I don’t know which scene was the most stunning visually, but the coloring in the scenes after the storm, and the scene where they arrived on the beach both stood out. Keep it up, Vikings camera crew. Actually keep it up, everyone involved with the show. This was another strong episode.

Other thoughts: Why are there so many baby goats this season, and where can I get one?