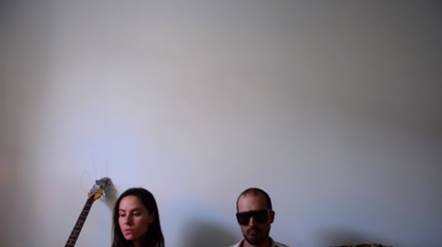 MaicaMia’s second album, des era (released on January 28) was recorded in the group’s native Montreal and at their own studio last year.  The group’s core consists of Maica Armata (guitar and vocals) and Jonny Paradise (drums and sampler) and they’ve recently added bassist Mauro Pezzente to flesh out their sound, along with a few extra friends on the recordings.

The 5-song EP offers an atmospheric blend of samples, guitar and vocals and it’s available in digital or limited edition vinyl.

Their Facebook PR describes the music as ‘girding space-balladry supreme’ but I found the tracks offer more of a lazy, sexy kind of vibe. Maica has a rich melodic voice that trips over the words, dripping emotion. She’s all anguish and longing on the title track ‘des era’ while the second track, ‘eugene’ was like a 1950’s ballad on a bad acid trip.

That voice takes centre stage in minimalist arrangements with a growly, dirty guitar line and cymbally percussion line. Fuzzy guitar + rhythm section with her voice emoting over it all. On ‘wish’ the already sparing approach begins with only the buzzy guitar and voice; it works well to create a spooky kind of a feel – a good lead up for episodes of Coven maybe?

‘neH2ble’ begins with a synthy electronic sound but then it breaks into the same guitar vibe; ‘oww oww’ offers  some more interesting electronica as a neat backdrop for Maica’s expressive voice and it’s a welcome variation on the theme.

I get the atmospheric qualities of the music – I really do – but it does end up sounding like the same song over and over, largely because of the slow, slow pace of all the tracks. You’ll either love it or hate it.

Get the album here: http://maicamia.bandcamp.com/ or visit the band’s website.