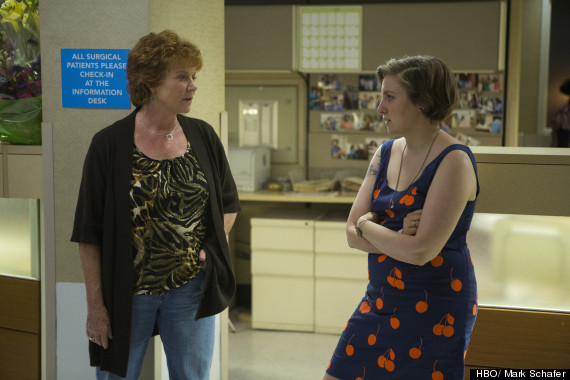 So, Hannah’s cousin is awesome. Maybe it’s just me, but I think Hannah really needed someone to kind of be a jerk to her. Hannah also spent this episode of Girls really seeing what family is about and how complex relationships can be.

After Adam rushes to the hospital when Hannah over exaggerated the effects of her and her cousin’s texting-while-driving car accident, Hannah’s mom gets her wish. Adam tells Hannah’s grandma that they’re getting married despite an uneasy and uncomfortable conversation Adam and Hannah had about whether marriage is in their future at all.

Despite Adam trying to do everything right, Hannah’s mom warns Hannah not to limit herself. She doesn’t think Adam’s right for her daughter. He’s strange and off putting and a lot of work. She thinks Hannah should keep her options open. Hannah’s pissed that her mom’s saying these things, but you can see her taking it in and internalizing it. The seeds of doubt had always been there and have been growing all season. Plus, Hannah tends to believe anything bad that people say about Adam or her relationship with Adam and she takes everything personally. I think something big is going to happen by the end of the season, but whether they break up or get married is up in the air.

Hannah’s grandma dies at the end of the episode just as she gets back into the city, and things finally sink in for her. Things were more serious than she thought in every aspect of her life. Now, it’s time for her to get back to her life in Brooklyn.

Next week we’ll see what’s going on with the rest of the girls. Plus, Elijah will be back and that’s always great news.