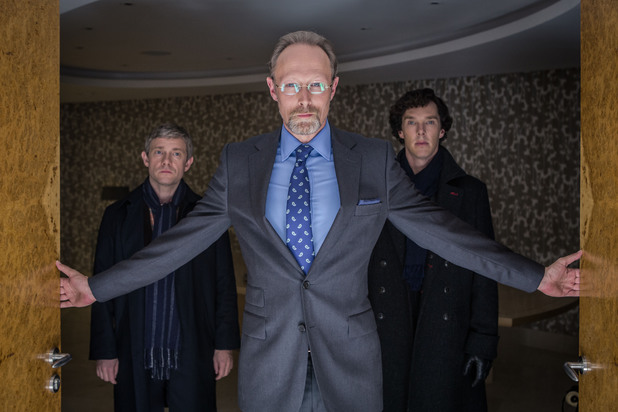 Steven Moffat is the showrunner of two of Britain’s most known shows: Doctor Who, and Sherlock. A few years ago, Steven Moffat said, “The Doctor is like an angel aspiring to be human, and Sherlock is a man aspiring to be a god.” At the time, I thought that was an apt quote to describe the two iconic characters. Over the years, I have become more and more disenchanted with both shows, and as I was watching Sherlock’s season 3 finale something clicked into place. Moffat, who penned ‘His Last Vow,’ has strayed from that ideal. His Doctor has been increasingly superior and arrogant in his dealings with others. And Sherlock is no longer aspiring to be a god, because he basically achieved at least demigod status when he restarted his own heart through what appeared to be sheer mind power.

At first, Sherlock’s journey was about him becoming more human. Season 3 decided to completely do away with that character development, and transformed Sherlock into some kind of super-hero. Granted, the character of Sherlock Holmes has always had super-human abilities. It’s part of the charm of the character, and there has always been some degree of suspended belief that comes with the territory.  There was a scene when Sherlock was shot, and despite having only seconds before succumbing to unconsciousness, thought his way through the physical trauma and made sure his body fell in the most advantageous position. His heart actually stopped at one point, but in a trippy sequence when he was locked in his own brain with Moriarty, he basically decided not to be dead because John needed him. It was stretching the imagination a little too far for a show that used to aim towards at least some degree of fake realism.

Another moment that had me rolling my eyes was after the climax of the episode, when Sherlock shot and killed Magnussen, the episode’s villain. He did it to protect the Watsons, because Magnussen had blackmail material on Mary. It felt like an action the Sherlock from the original stories would abhor, but at least it was vaguely understandable.  The aftermath of this cold-blooded execution was poorly handled. Mycroft of course, managed to talk Sherlock’s way out of jail, convincing other government higher ups to send Sherlock to Eastern Europe on what was surely a suicide mission. His justification was Sherlock would cause too many problems in jail. If people can find a jail that can handle Hannibal Lector, they can probably find one that can handle Sherlock Holmes. But no, Sherlock is too special for jail. He is instead sent into exile, and given an overdramatic farewell. This was an unnecessary attempt to make him a tragic hero figure: saving his friends and dooming himself. The fact of the matter is Sherlock murdered a man. It doesn’t matter what his motivation was. He should have to face a court and trial like anyone else would.

Anyway, his ‘exile’ lasted for about four minutes. Almost as soon as Sherlock took off, Moriarty hijacked every screen in Britain asking, “Did you miss me?”. No. Well, yes, but no. Out of all the TV deaths that I bemoaned and begged for a dead character to come back, I am annoyed this is the one the TV gods decided to listen to. Don’t get me wrong: Andrew Scott did a wonderful job as Moriarty. He was interesting and challenging, and had a fantastic arc. That ended with him blowing his brains out. It was sad to see him go, but his story had a conclusive, definitive end that made sense. Even if Moriarty isn’t back, and it’s one of his old lieutenants using old footage of him to cause panic (which I suspect it might be – because again, brains), why? He was an engaging villain, but his time is up. It’s time to let Moriarty go.

Maybe the show realizes they have a hard time coming up with another worthy antagonist? Magnussen wasn’t really an engaging villain; I didn’t think the “Napoleon of blackmail” was that interesting. By the way, why is everyone the Napoleon of something? Moriarty was the “Napoleon of crime”. What’s next? The Napoleon of traffic misdemeanors? Switch up your conquerors at the very least. Magnussen was a competent enemy, I’ll give him that. I didn’t have any attachment to him really, so I didn’t shed any tears over his death. But what was annoying was he beat Sherlock by outsmarting him. And he got shot in the head. It felt almost like sore losing on Sherlock’s part.

It seems like no one is allowed to beat Sherlock or criticize him on the show. Magnussen, while a despicable person, won. The other thing that was noticeable throughout the season was the treatment of Donovan and Anderson, who in seasons 1 and 2 were Sherlock’s greatest critics. Both were barely present this season, Donovan only appearing in a flashback in season 2. Anderson went insane and became the founder of a Sherlock fan club. It was an incredibly bizarre direction to take his character in. But it is part of the larger problem: Sherlock’s behavior is more and more questionable, and yet, he is running around unchecked. Everyone is either ultimately on his side, or neutralized through death or being written off the show. Some of Sherlock’s actions should be criticized, but by letting him run around unquestioned, it gives the impression he can do no wrong.

The show’s standards for acceptable behavior are incredibly low as it is. Mary, John’s wife shot and almost killed Sherlock, because it turns out she’s a secret assassin. But she was forgiven because she only almost killed Sherlock. Sherlock’s argument that Mary didn’t mean to kill him was flawed, unless Mary somehow knew about Sherlock’s ability to restart his heart through mind power. I don’t know why Mary being an assassin was a necessary revelation. It just made no sense, nor did their explanation that John is just attracted to dangerous people. And despite Mary’s insistence, I don’t think John knew she was an assassin, not even on a deep subconscious level. Mary could have been a target for Magnussen’s blackmailing empire without her having a random backstory.

I think the reason this annoys me so much is Steven Moffat seems to always write women who are special snowflakes. On Doctor Who, Amy, River, and Clara are all women who have flashy backstories that are focused on more than their personalities, because Moffat struggles to write interesting women who don’t have something extraordinary about them, like having a crack in time and space in their bedroom wall, or bizarre timelines, or being ‘impossible’. Mary was such a good character. She was funny and smart, and could more than keep up with John and Sherlock. But she had to be given a crazy history for seemingly no reason. Even Mrs. Hudson this episode was revealed to possibly have done more in her husband’s drug cartel than initially let on. What’s next? Is Molly secret super hero in her free time? I’m not saying there can’t be women with complicated pasts. But there’s nothing wrong with having a normal woman with a normal history; they can still be interesting.

This episode was just the last straw for me as far as some problems I’ve had with Moffat’s writing for a while. Both his shows feature arrogant, god like men who face very little consequences for their questionable actions and special snowflake women and an obnoxious tendency to quote themselves. It’s difficult to look at this ‘His Last Vow’ and separate it from patterns from Moffat’s previous work, since once I reached my breaking point, it was difficult to focus on anything else. I thought there were some gorgeously shot sequences, even if they did use some unnecessary flashbacks. Sherlock’s fake relationship was actually one of my favorite parts, because it was a call-back to the original stories, when Sherlock pretended date a woman as part of his investigation. I just wish they had stayed more true to the original stories with Sherlock and Mary’s overall characters.