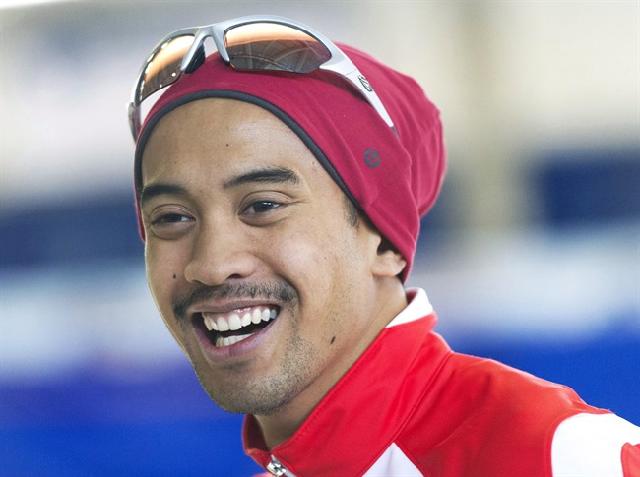 Olympian of the Day: Gilmore Junio

Gearing up for the Sochi Olympics, there’s been a lot of grumbling about, well, Russia. The games are in Russia and there’s nothing we can do about that- it means all sorts of terrible things from human rights abuses to animal cruelty to crappy hotel rooms for reporters, and that’s all very sad. But you know what will accomplish nothing? Boycotting the Olympics and bitching about it on your Facebook page. Putin doesn’t care if you skip the ice dancing finals to watch Super Fun Night, but I’m sure Tessa & Scott* would appreciate your support (not that Rebel Wilson doesn’t, but you get my meaning). I completely understand the impulse to avoid the appearance of supporting the villainous policies and rampant corruption that’s marked the 2014 Winter Olympics, but in boycotting the Olympics you’re just further undermining this thing that thousands of (largely unsung) athletes have prepared for all their lives (as upset as you are, you better believe they’re even more pissed that their dream is so mired with horror). Let’s protest, let’s start petitions, let’s make sure the Olympic committee knows we as viewers won’t tolerate the choice of a similar venue ever again. But, in the meantime, let’s not let the dark cloud rain all over an event that can be so inspiring and positive.

I greatly prefer the winter Olympics to the summer, and the main reason has a lot to do with said inspiration and positivity, because the Winter Olympics is where Canada shows up to play. And positivity’s sort of our thing (I mean, not me specifically; I’m comparatively a super negative Canadian but, again, you get my meaning). Yes, we’re near the top of the medal count and, yes, during yesterday’s relevant incident, we picked up one more. But that’s not the point. The point is that on Tuesday, Canadian coach Justin Wadsworth rushed onto the cross-country course to replace a Russian competitor’s broken ski. And the point is Gilmore Junio.

28-year-old Speedskating superstar Denny Morrison recovers from a broken leg last season only to fall during the Olympic trials and fail to qualify for his signature event, the 1000-metre. He does qualify for the 1500 and heads to Sochi with his team, prepared to skate the longer event and sit on the reserve bench for the race where he was considered a major medal contender… until he received the following text:

It was 23-year-old teammate Gilmore Junio, prompted by a, frankly, ballsy request by Speed Skate Canada. Junio easily could have said no. Lots of people would have said no. But Gilmore Junio said yes, having placed 10th in his stronger event (the 500-metre) earlier in the week and knowing that Morrison was his country’s best chance at a 1000-metre medal.

Morrison placed second in the event with Junio screaming his head off at the sidelines, the pair together adding another silver to Canada’s growing medal count (which currently stands at 10: 4 gold, 4 silver, 2 bronze).

The takeaway is this: the Olympics are about individual athletes playing for a team. They’re about niche sports and the people who master them getting to the international stage. They’re about hearing your national anthem, and Norway’s, and Slovenia’s (not just “The Star-Spangled Banner” over and over because American football is the only thing that matters). They’re about making sure the Russian cross-country skier gets to cross the finish line. They’re about Denny Morrison speedskating a thousand meters faster than he’s ever skated that far before.

Be as outraged as you want with Vladimir Putin and whomever else you want, but don’t take it out on Gilmore Junio. Watch anyway, because of Gilmore Junio.