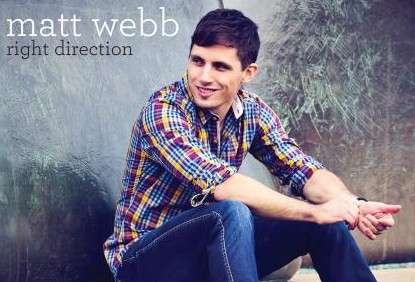 Vancouver native and lead guitarist of Marianas Trench, Matt Webb just released his latest solo EP Right Direction on February 4 (Get it on iTunes) and he’ll be on the road in his first solo headlining tour through March 2014 (dates listed below).

He’s a multiple award winner with Marianas Trench (JUNO for Group of the Year, multiple MuchMusic Video Awards ++) and has garnered Gold and Platinum sales certifications. Right Direction is his second solo EP after 2008’s Coda and Jacket that spawned the single “Bad Girl”. This time around, he’s working with producer Kevin “Kevvy Mental” Maher and is backed by drummer Al Glassford, bassist Peter Davyduck and pianist Andrew Belson.

The new six song EP features well-crafted, radio-friendly and mostly acoustic pop with a more intimate, singer/songwriter sound than fans of Marianas Trench or his previous efforts might expect. The songs, naturally, are lit up by his rhythmic guitar work and crisp drumming that work up a nice groove in each track.

Matt’s voice is fluid enough to make the lyrics work but I found the vocals overly processed at times, obscuring the expressiveness. It’s also the one element on the EP that becomes a somewhat repetitive. He’s got an accomplished voice but uses the same bag of tricks for every song – more variety here would elevate the collection.

Lyrics cover the usual ground of relationships and such and with enough variety in his song writing to offer something new in each track. “Don’t Turn Your Back On Me” features piano and inventive lyrics that wrap around the lines, infusing new life into that well-worn theme. My favourite track was “Hang Tight”, with syncopated rhythms that add a sense of urgency to the vocals – that’s what sets it apart from the other songs.

All in all, pleasing pop collection from a fixture of the Canadian music scene.