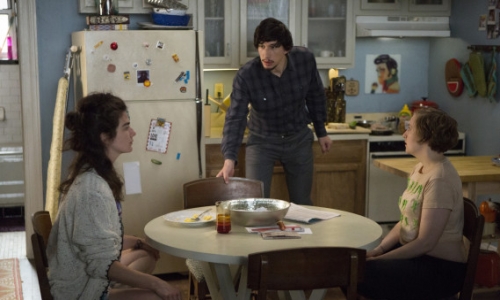 Thank you, Ray, for everything you said to Marnie. It was immensely satisfying to me. This week on Girls, Marnie is put in her place when she asks Ray to tell her what’s wrong with her and Ray doesn’t hold back. He does, however end up feeling bad and tries to take some of the sting away. They immediately have sex afterwards, which will undoubtedly become a recurring thing.

Marnie has been feeling left out, as usual, because Hannah won’t come see her new cat. Hannah is busy playing therapist to Adam and Caroline. The therapy session starts with Hannah having Adam and Caroline tell her they loved her, then things get serious. They have been fighting nonstop and things are getting worse. Adam describes his problems with Caroline: she is directionless but has tons of opinions. This earns him Hannah saying “interesting” seven times because he has basically described himself. The big fight ends once Caroline says she thinks Adam is sexually attracted to her, and they wind up with Adam on top of Caroline on the couch.

Beneath the anger and resentment between them, though, there is love, and this is something Hannah does not understand when she kicks Caroline out of the apartment and neglects to even ask where she is going to go at the end of the episode. Adam, quite understandably, is baffled by Hannah’s lack of understanding and complete self-involvement. He is really seeing Hannah for who she truly is, just as Hannah worried he would, and this might just be unforgivable to him. No matter how much Adam said he hated Caroline and wanted her out, Hannah did this for her own wrong and selfish reasons and Adam never thought she would do something like this. She doesn’t even apologize or move off the couch when Adam is questioning her because she is too upset.

Hannah had been distraught because she found out her ebook is dead. She even hounds David’s wife about the fate of her book at David’s funeral. It finally looks like her dreams are coming true when a new publisher offers to publish her book into a real paper book. Even though she had to change herself to get it during the interview, Hannah is ecstatic. That delight quickly turns to crushing disappointment when she finds out that the old publishing company owns the rights to the book and she can’t do anything with it for three years. Her life is ruined.

This despair is what Caroline is subjected to. At first she tries to console Hannah, but Hannah is beyond consoling. Things turn to Caroline complaining about Adam not being there for her, and Hannah lashes out and ends up kicking Caroline out. That’s when Caroline spews the insults back.

Off on their own, Shoshanna and Jessa are trying to get their lives together. Shoshanna is feeling the effects of her new life and is buckling down and studying so she can fulfill her fifteen-year plan. Jessa, on the other hand, is going to work in a children’s store.

This was a really strong episode for Girls. It was revealing and emotional. Things are definitely at a turning point these relationships are changing. I personally hope Ray and Marnie don’t stay together too long, though.