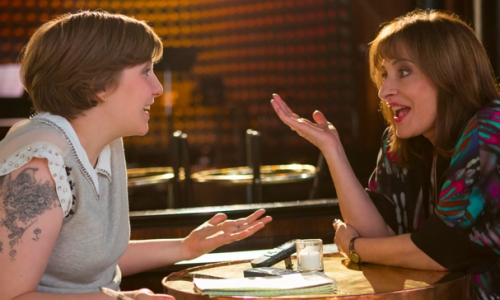 Adam’s new folk singing, actor friend stops by and Marnie, Shoshanna, and Elijah are immediately smitten. He was even on One Tree Hill! I don’t know what Hannah’s problem is, that guy’s awesome.

This week on Girls, Hannah finds out that Adam nailed an audition and is going to be making his Broadway debut while interviewing Patti LuPone. Hannah’s interviewing Lupone for an advertisement for Osteoporosis medication despite the fact that Lupone doesn’t have Osteoporosis, so, together, they construct a story of how she got it. Hannah is very excited about this interview, even going so far as to track her down after she cancels, only to take Adam’s call right in the middle of it. She tells Lupone of her boyfriend’s success, and Lupone warns her about what Broadway life will do to her relationship. Hannah spends the rest of the episode worrying and moping and contemplating the demise of her relationship, but she does throw a celebratory party for Adam in a hotel room she’s supposed to be using for work. She’s a great multitasker. She ends up telling Adam about her worries and insecurities, but they tell each other they love each other and all is well for now.

Adam doesn’t even want to live that kind of life anyway. When Elijah tries to talk about what bars to go to and how to feed Kristin Chenoweth, Adam shuts him down. He certainly won’t be introducing Elijah to anyone.

Marnie is also dealing with someone else’s newfound success. She finds out that her former coworker is opening up an art gallery and she does not handle it well, acting all jealous and condescending. Then, to make matters worse, Ray breaks up with her because he wants a real relationship with someone he actually cares about. Again, she does not take it well. She goes to Hannah’s party and cries on her shoulder, but luckily she gets to sing her heart out with new folk guy.

Jessa’s rehab friend tracks her down right when she realizes that she’s bored with her job and with her life. He tells her that she’s not cut out for this kind of life and that she’s an exciting person that needs to live an exciting life. So, they do a ton of cocaine and steal from the store Jessa works at. Jessa’s lost what little self control she had and it looks like things are going to be rough for her during the next couple of episodes.

Hopefully we’ll see more of Shoshanna soon. She was great last episode and it would be good to keep that going. We can only hope that Ray meets his true love, and it’s not Marnie.