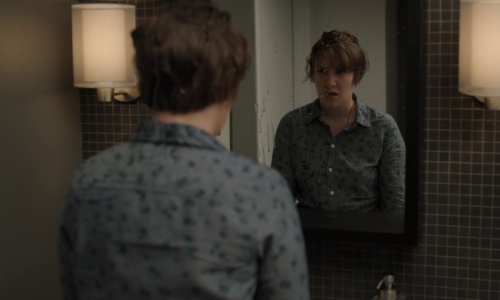 This week on Girls, Hannah goes corporate. She finally has a writing job, but it’s as an advertorial writer for GQ. Hannah’s okay with that though, because this is just a stop along the way for her. She’s not really a corporate advertiser; she’s a real writer. Her spirits are high when she makes friends, garners praise, and finds the snack room. She’s getting to know the people and politics of her new office. She gets especially close to Joe, who has a crush on another writer. She even starts pushing Adam to get a real job now that she has one.

She feels a crushing blow, though, when she realizes that nobody really wants to be an advertorial writer. All her coworkers are “real” writers too, or at least they used to be. They’ve all gotten complacent in their corporate lives and haven’t really written anything in a long time.  Hannah sees a dismal future for herself. She can’t truly be happy unless she has the exact future she envisioned for herself. She goes to her boss to express her feelings about becoming stuck in this role and losing her true purpose, to which her boss tells her that she can leave and plenty of people would love her job. Hannah now has to choose between the dream she’s always had, and making a compromise for a good job and the possibility that that dram may not come true.

Adam, on the other hand, always stays true to himself. He has been going on acting auditions, but has been handling them with apathy, if not contempt. He really doesn’t care what happens during the interview. This works out to his advantage, though, when he gets a callback. Adam’s really excited when he tells Hannah, revealing that he may care a little more than he lets on.

Marnie and Ray are still a thing, which I am still not pleased about. Ray’s trying to accommodate Marnie’s interests in his life, watching reality television and calling her to see how she’s doing, but they end up yelling at each other about the complicated nature of Western aid in Africa in the middle of a Chinese Restaurant. They’ve turned to each other mostly out of loneliness, though their disdain for each other turning into attraction doesn’t feel very believable for the two of them.

Shoshanna has seen how well Ray is doing and is starting to creepily stalk him. She also starts to get competitive. She’s seeing him achieve success without her and she is not pleased. She decides that it’s time for her to stop messing around, and get serious. That means getting into a serious relationship with someone, even if it’s the dumbest person she’s ever met.

The girls all seem to be going through a huge identity crisis. Even when things are going well, like Hannah getting this writing job, things are miserable. Somehow it doesn’t look like Hannah’s keeping that job long. Thankfully, Ray will always be there to take her back when she messes up.