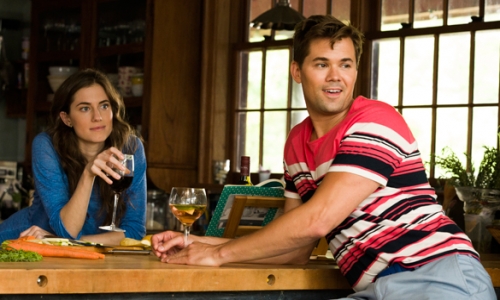 Elijah’s back! He walks right up to Hannah who’s in the middle of the street in her bikini and right back into the girls’ never-ending, passive aggressive drama while on their weekend getaway to not quite the Hamptons. It’s like he never left.

Marnie has set up her dream vacation in North Fork, a place for people who think the Hamptons are tacky, though Elijah and his friends seem to feel differently. She has planned her adult and sophisticated weekend for her, Hannah, Jessa, and Shoshnna with every detail in mind, even planning when exactly the drama is going to start. Marnie misses the way things used to be and wants them all to be a group again, as long as they do things her way.

This frustrates Hannah. She doesn’t want to deal with Marnie and her issues and she doesn’t like being managed. So, the first chance she gets, she invites Elijah, his boyfriend (or not boyfriend), and his friends over, telling Marnie that they invited themselves. Everyone has a good time except for Marnie. There is swimming and drinking and a choreographed dance, which even Marnie gets into, until she tries to turn it into a chore for Hannah. Elijah and Hannah are on good terms again and Elijah tries to reconnect with Marnie, but she doesn’t seem to want to.

Throughout the night, there is an underlying tension between Marnie and Hannah. Eventually, they get alone in a room together and talk it out, though it’s mostly superficial. Marnie talks about her abandonment issues, Hannah talks about her need for space, and they tell each other it’s all right, though we all know better. Though they’ve clearly worked it out between them, Marnie thinks the four girls need to have a similar talk as a group, but it doesn’t happen the way she’s planned.

After getting drunk, the girls let each other have it, in front of the guys, who get uncomfortable and slowly walk away and end up having their own drama. It’s nice to see that these characters are flawed and struggling as well, rather than this just being about these terrible girls all the time. It’s good to have other people to compare them to.

While all the girls have something to say, Shoshanna really lets them have it. She unleashes all of her rage and lets each one know what she really thinks of her. In a way, she’s sticking up for herself. She has always seemed kind of like an outsider in the group and has had to listen to her friends complain for a long time and now she’s finally telling them how she feels about them and the way they treat her. That being said, she does not hold back and says some horrible things to them. She doesn’t really understand what’s going on with them or their issues.

The episode ends with the girls cleaning up the mess in the kitchen from the night before and trying to clean up their broken friendships. They wait for the bus to take them back to their lives and halfheartedly do their dance from the night before. They’re all feeling the distance, but if we know anything from this show, it’s that just because they’re terrible to each other, doesn’t mean they won’t be friends anymore.