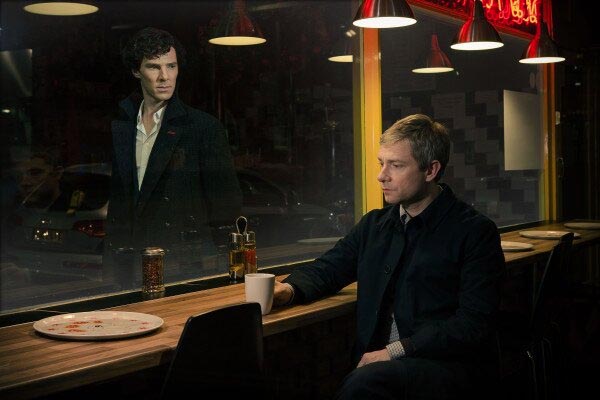 After two years, Sherlock returns to the air. Was it worth the wait? Short answer: no. Long answer: hell no. To be fair to the writers, it was going to be nearly impossible to please everyone after a two year gap between seasons, especially since season two ended with the big question of how Sherlock faked his death.

How did he fake his death? That’s an excellent question. The show opened with a convoluted explanation, which luckily turned out to be a fake. As was the second one. When the third ‘explanation’ rolled around, I thought it was fake too, because it also was stupid. But alas, that was the closest explanation we’re going to get. Sherlock related it to Anderson but it was implied Sherlock might have made it up just to lie to Anderson. “Everyone’s a critic,” Sherlock scoffed when Anderson expressed his doubts about that particular version of events.

The problem with this scene is either interpretation is completely unsatisfying. Either Anderson was right, and that wasn’t how Sherlock actually did it, in which case, after two years, the audience is never granted the answer. (The moment at the end of the episode when John asked Sherlock how he did it and Sherlock only smirked supports that interpretation). The other, possibly worse interpretation is that Sherlock actually jumped off a building and landed on a large inflatable device, assisted by his brother and his ‘homeless network’. Even for Sherlock Holmes, the logistics would have been difficult to make sure everything went off perfectly, and no one outside their group of 20+ participants ever found out. Even imagining for a second the plan was pulled off without a hitch, there are other issues.

First of all, Mycroft’s involvement completely contradicts his grief struck reaction at the end of season 2 at the news of his brother’s demise. Second of all, Sherlock faked his death to convince Moriarty’s men he died, but with this new explanation, it was centered around convincing John. There were a lot of continuity errors between this season and last season that this explanation causes. Not to mention he jumped onto a giant inflatable device. I keep thinking of the ‘Safety Training’ episode The Office when Michael wants to jump off the building onto a moon bounce to fake a suicide. I’m sure Sherlock would be offended I’m comparing him to Michael Scott. Well, good. It doesn’t matter that the ‘everyone’s a critic’ line was an attempt at humorously deflecting the inevitable dissatisfaction. It was a terrible solution to a two year old problem.

Also terrible: Sherlock. It’s difficult to root for someone who is so unlikeable. This is a problem I’ve noticed with other series Moffat has worked on (namely Doctor Who), where the protagonist does something problematic, but it’s brushed off, and we’re still supposed to ignore bad behavior and focus on how the character is the ‘hero’. I could go on and on about this, but let’s focus on this episode. After two years of letting John think he’s dead, Sherlock assumed John would still be waiting for him, ready to pick up where they left off. And he decides to pop in on John, putting on disguises, and making jokes when he finally reveals himself like it’s a prank. How is that an acceptable thing to do to your best friend? How self-centered are you that you assume someone basically stopped living their life for two years?

Sherlock from the earlier episodes had problems understanding people and social interactions, but he was growing and learning. In this very episode, he was yelling at a client for misleading his stepdaughter by posing as an online boyfriend. It was a very short moment, but it shows Sherlock does have some idea of moral right and wrong. And yet, Sherlock thought it was okay to let John think he was unable to defuse a bomb, so he could have a good laugh and manipulate John into saying nice, sentimental things. And John instantly forgave him. I don’t know what kind of horrible person lets their supposed best friend think he’s going to die for a laugh, but John forgave him very quickly, so maybe they were made for each other. I just wish they would have Sherlock’s social and moral development remain consistent, and not come and go for ‘comedic’ effect, because it makes it hard to like Sherlock, or even understand him.

It wasn’t the only moment to fall flat. Anderson, Sherlock’s greatest critic in the first two seasons literally started a Sherlock fan club because he felt guilty for his supposed death. He also went slightly crazy. The last shot we saw of him was him tearing down papers and laughing hysterically. It felt almost like it was supposed to be funny, because Anderson was by no means a popular character, so it felt like the show was trying to reduce him to this outlandish conspiracy nut we’re supposed to laugh at, but I just felt bad. For Anderson, because his life’s falling apart, and for Jonathan Aris, because the script he was given makes no sense for the character he’s played for two years and he had to try and make the unnatural character changes work.

The crime this episode should have been interesting. It concerned a plot to blow up Parliament on Guy Fawkes Day. But the execution was awful. It seemed shoved in as an afterthought, because, oh, right, it’s Sherlock, we need a crime. Usually if a plot takes a back seat to character development, I let it slide, but in this case, the characterizations were all over the place, so the episode was just an incoherent mess.

There were a few things I liked. Amanda Abbington was incredibly charming as Mary, John’s fiancée. It’s difficult to come in as the significant other to a member of an established duo, but Abbington fit in instantly. The supporting characters in general were strong. Molly and Lestrade were both excellent as usual, although I wish they had more screen time. And the cinematography remains gorgeous. It felt like they slightly overdid the slow-mo, but Sherlock is still a creatively and beautifully shot show.

Is that all enough to make up for a two year wait with unsatisfactory answers? Absolutely not, but there are two episodes left for Sherlock to find its stride.

Other thoughts: I enjoyed the shout out to Les Mis. Until Mycroft called Sherlock in the middle of watching it. Were both the Holmes boys raised in a barn? Sherlock fakes his death and doesn’t call his best friend for two years. Mycroft makes phone calls in the middle of shows at the theater. (During ‘Do you hear the people sing’, no less. That’s one of the best songs, you barbarian). At least John punched Sherlock in the face. I hope a theater patron did the same to Mycroft, because who does that?