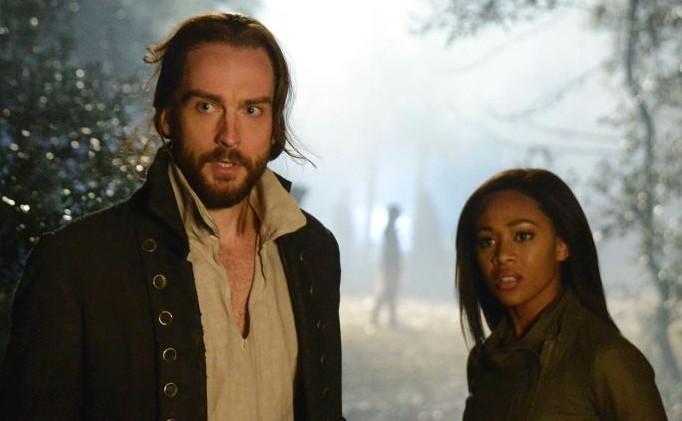 Sleepy Hollow was one of the best surprises of the 2013-2014 TV season. When I started watching, I wasn’t expecting to like it nearly as much as I did, but it quickly became one of my favorite new shows from the fall 2013 pilots. But sadly, after this week’s dramatic season finale, it’s over all too soon. (Spoilers ahead)

After watching the show’s pilot, my biggest concern was its high concept plot. It deals with an impending apocalypse. The road leading to the apocalypse is filled with prophecies, peppered with Biblical and mythological allusions and figures, and topped off with a heavy dose of flashbacks to the Revolutionary War. There’s a lot going on, but so far, the show hasn’t been weighed down by it. It’s done a good job on an episode to episode basis of keeping things entertaining, while still keeping the bigger picture in mind. There are plenty of twists and turns, but you get the sense that the writers know the story they’re trying to tell, so the path might be a windy one, but you’re not wandering around aimlessly.

My biggest plot related concern/complaint is how everything is connected to the Revolutionary War. Crane is from the late 1700s, and he is one of the main characters, so I understand it has to be a part of the show. But when you bring in, say for example… zombie George Washington, things start to border on the absurd. Not to mention, it undermines the scale of the apocalypse. The two Horsemen of the Apocalypse that have been introduced have both been connected to Crane: his former friend/rival is Death, and now his son is War. The Horsemen are Biblical figures, so why were they originally men from the late eighteenth century? The only way that kind of makes sense is if this is a Dread Pirate Roberts situation where Horseman of the Apocalypse is a title that’s passed down from generation to generation. Which still doesn’t make a whole lot of sense. The show does try to incorporate ancient demons and evils to widen its scope, but the Revolutionary War obsession diminishes the effectiveness of that. If you try not think too hard about all the Revolutionary War connections, and then it’s fine.

And anyway, while the plot is entertaining , it’s the characters who really keep you tuning in week after week. The show does a good job of not only making interesting characters, but creating interesting relationships. Crane and Abbie’s friendship is a thing of beauty. It doesn’t hurt that Tom Mison and Nicole Beharie have great chemistry. But more importantly Sleepy Hollow isn’t afraid to challenge some usual male/female dynamics. Crane and Abbie have both done their share of damseling. Abbie has saved Crane because he made an irrational, emotional decision more times than we’ve seen the reverse. There’s a strong mutual respect and admiration between them, and a lot of give and take. I enjoy the heart to hearts, and watching how far they will go to protect each other. But I also really enjoy Abbie teaching Crane about the modern world. (If there were a spin-off about Crane vs the modern world, I would watch it in a heartbeat.)

Abbie and Jenny’s relationship is also fantastic. I can’t think of many good sister relationships on TV right now. They’ve had their rough patches, but at the end of the day, no matter how mad they are at each other, they have each other’s backs. Crane is already president of the Mills Sister Appreciation Club, but I volunteer to be vice president.

The only relationship I’m not a huge fan of is Crane and Katrina, which is a shame, because Crane really loves his wife. Katrina has her moments, and I want to like her. I think I could, if she were given more to do than deliver cryptic warnings, and be held as a ‘prize’ for Death. On the plus side, she’s finally out of purgatory. On the downside, she’s now Death’s prisoner, so I’m afraid she might be regaled to ‘damsel’ mode again and that won’t help develop her personality at all.

Next season has a lot to look forward to, other than potential character development for Katrina. We get to explore other members of Crane’s family. It was a brilliant stroke to make Crane’s son, Jeremy turn out to be a villain. I had an inkling he would be; “The Golem” made him too significant a character to not return, and given that he grew up without his parents, then was buried alive by witches, villainy seemed the natural path. But making Henry Parish, a formerly trusted ally, an alias for Jeremy/War was a twist I did not see coming, and it was genius. It promises to make things even more difficult for poor Crane next season, which will excellent. The last member of Crane’s family we will get to see more of is his father. Victor Garber had a very brief scene as Ichabod’s father, and he’s coming back (http://tvline.com/2014/01/21/ask-ausiello-spoilers-greys-anatomy-scandal/). I don’t have a huge attachment to Crane’s father, because we haven’t really met him yet, but Victor Garber.

It’s going to be a long wait for season 2. First of all, it’s January, and Sleepy Hollow isn’t coming back for months. But worse, is that pretty much every character is in a terrible cliffhanger situation. Abbie is stuck in purgatory, Crane has been buried alive by his own son, Jenny could be dead (she better not be), Frank is in jail after confessing to a murder to protect his daughter, and Katrina has been kidnapped. It was a fantastic episode of television, but the wait between seasons is going to be agonizing.

To make the wait more bearable, I suggest checking out the writers’ Twitter account (@sleepywriters). Not only do they have a fabulous interactions with the writers of Elementary, but they seem just as excited as the fans (and cast member @TheOrlandoJones) about their show, so you feel confident the show is in good hands.