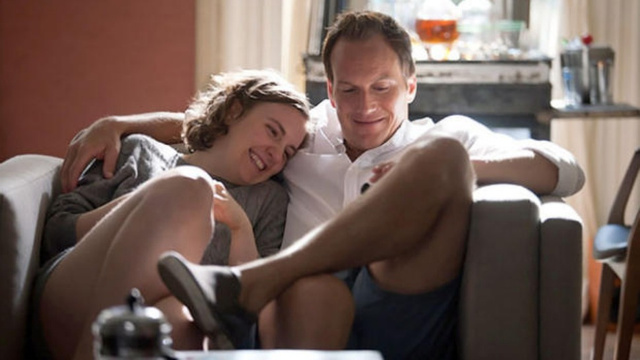 The first season of Girls was a pretty consistent ride through the sometimes alienating, sometimes uncomfortably relatable lives of its four main Girls. There were parts that I loved and parts that I hated but ultimately by the time we got to the season finale I’d learned to appreciate the show for its boldness and the characters for the humanity I may or may not have been able to spot earlier in the season (the way Adam Driver and the writers slowly managed to 180 my opinion of Adam by chipping away at his off-putting exterior was easily the highlight of the season for me). My trouble with the show’s first round mostly came down to its self-important assertion of realism. Every once in awhile Girls will hit upon something I think rings true-er than most shows (Marnie breaking up with Charlie because he’s boringly nice, Hannah’s self-pitying self-involvement), but as someone who honestly does hard-core relate to happier, better-mannered shows like New Girl, The Mindy Project and early-days How I Met Your Mother, the ‘life sucks and bad decisions are mandatory’ attitude that Girls often takes wears on me. But, with that fundamental issue adding a grain of salt, my feelings towards season one generally followed a simple upwards trajectory towards basic if not overwhelming appreciation.

As the HBO hit’s third season premiere looms closer, let’s look back at the roller-coaster of quality, joy and frustration that was season two.

The first major difference to the series was Jessa. It could be because the actress was pregnant but the intolerable hippie was largely absent from the second season. The self-aware breakdown of her marriage to Chris O’Dowd was decent if terribly dramatic and there were moments within her intense standalone episode trip to visit her father that pointed to Jessa’s purpose in the series. But, ultimately, she’s condescending and ridiculous so the lack of her easily put season two ahead of season one.

The start of the season also sported a mini-arc from Andrew Rannells which was both improbable (who agrees to live with their gay ex-boyfriend?!) and somewhat delightful (the you’re-the-most-fun-ever-and-incredibly-bad-for-me up and down of Elijah and Hannah’s season two friendship was one of the few stories that applied to my life at all.

The other small arc I hugely appreciated was the introduction of Councilman Jamm (aka Jon Glaser) as the former drug addict who lives downstairs from Hannah. The kind of brilliant and kind of stupid cocaine episode (kind of brilliant in its execution, kind of stupid in how frustrating Hannah continues to become- the idiocy, the desperation, the conformity; My God, Woman!) brought in Laird as a genius foil to Hannah. Here’s a guy where every sign points to “mess”, who turns around and serves as the steady voice of reason opposite Hannah’s clueless short-sightedness.

Marnie (my favourite season one Girl) was a rough character to watch in season two as she abandoned her at least somewhat savvy season one persona in favour of a relationship she completely misunderstands with a pretentious artist and a dopey storyline about wanting to become a singer. Her desperate and manipulative moves towards her kind, hipster ex-boyfriend after he develops a successful app were wildly unlikeable but at least they felt consistent with the Marnie who existed the previous year. All Marnie frustrations are forgiven, though, because of the utterly real tragic genius of her phonecall with Hannah in the season’s best episode- “Boys”.

Speaking of Boys, their development was, for me, the highpoint of the season. Adam is, I think, Girls‘ great character contribution to television pantheon and Ray is one of the only characters I find all that relatable. A Hannah-free storyline for Adam and a lot more attention for Ray and Shoshanna’s relationship in season two gave the season some consistency when everything else was all over the place.

That leaves two major water cooler elements of the season. I don’t have that many thoughts on the OCD storyline apart from the fact that it was both stirring and frustrating because it’s been a long time since any of Hannah’s struggles have actually made her more sympathetic. That story was full of big moments and at least one phenomenal speech but I still just wanted to scream at her to get over herself, take her meds, and accept both help and responsibility at least once in awhile.

The bigger controversy of the season was more interesting- the Patrick Wilson episode (tied in a little bit to both the premiere and the finale). This episode and, in large part, the entire second season of Girls felt, to me, like one big detrimentally self-aware power move. My hypothesis is that season one started Girls off on the path Lena Dunham wanted to take but, over the course of that season and the few months that followed, the world’s opinion of that path sent season two down a different one. I don’t mean that Dunham caved to fan pressure and sold out her vision in order to be more successful. I think almost the opposite is true. I think she accidentally got in her own way by trying to defend where she was going. There was a lot of chatter about the show’s lack of diversity- so she had Donald Glover throw a fit about it in the season premiere. The biggest example, though, is the existence of the Patrick Wilson episode. A lot of the world’s jerks were really, well, jerky about Dunham’s looks throughout and after season one. So she wrote herself an episode wherein one of the most handsome men in Hollywood (playing a rich doctor no less) was so sexually attracted to her that they disappeared from the world completely for a whirlwind weekend affair. At the easily unnoticed centre of the affair were some really interesting notes about communication and honesty and really wanting what we ask for but that’s not what got the attention. No, everyone was really upset about how crazy unrealistic the whole thing was. A lot of people thought the whole thing happened in Hannah’s head. Since season one was, as I mentioned before, so damn snooty about its ugly “realism”, this bothered me too. But it all bothered me- the episode’s improbability, the terrifyingly hateful backlash against the episode, the response to the backlash that didn’t take into account the terribleness of the world in which we live.

As debate spiralled, I felt like we were getting further and further away from what Girls was supposed to be (ie: the aforementioned unpleasant human truths inside the affair story, not the hotness differential of the actors). Might the world be a kinder place if the ideal of beauty wasn’t so strictly imposed on us by television? It likely would. There is no reason why anyone other than Allison Williams should be expected to look like Allison Williams. And I honestly think that, in some small way, things like what Danny said to Mindy in Tuesday’s body-centric Mindy Project do make a small inroad on the issue (because if Chris Messina on the show thinks Mindy’s hot maybe some stupid real-life person who thinks Chris Messina is a cool dude will open his mind to someone who looks like Mindy Kaling instead of just continuing to look for Allison Williams. We learn our behaviour from the people we look up to on TV, afterall). But what made Girls special was its bluntness about how things work now, not how Dunham would like to use her influence to make them work. The tragic dependence of a massive demographic of recent graduates, the underlying sadness of modern hookup culture, the bald-faced self-importance of pretty much everyone currently alive and, yes, the fact that someone as cute as Charlie dates someone as cute as Marnie and not someone as average as Hannah. That’s just how that goes.

Girls season one prided itself on being a mirror of our own ugliness. Girls season two felt like a fantasia of random stories wherein Dunham shouts down her detractors and her own insecurities. From Donald Glover in the premiere to the sweepingly romantic Adam-Hannah ending in the finale, with the Patrick Wilson episode standing as the gleaming example, season two of Girls was interesting and evocative to watch but the show’s founding raison d’etre was nowhere to be found.