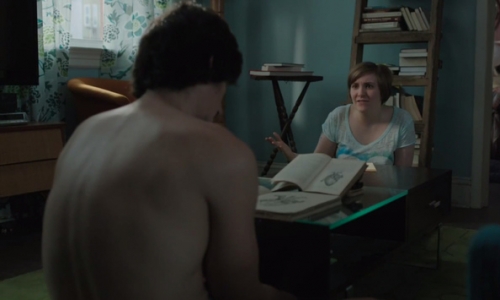 Girls’ third season premiered with two episodes on Sunday and everything is different, but also the same. Marnie is still defining herself by Charlie, Shoshanna is exploring herself in her senior year, Jessa is wreaking havoc in rehab. Things are good for Hannah, though. Hannah is happily with Adam and writing her book, but we can guess how long things will stay like that.

Things are already starting to get shaky for them. Adam’s ex Natalia confronts Adam in front of Hannah, and relating too closely to some of the things she said, Hannah can’t seem to let it go entirely. Adam, meanwhile is being kind and supportive, but it’ll probably start to wear on him and Hannah is definitely taking advantage. Hannah has been acting like everything in her life is perfect reciting clichés about holding the keys to her mind. Something tells me that’s not going to last.

Out of all the characters, Adam’s development has been the most interesting. While the girls are doing more of the same, Adam has changed and has become increasingly more likeable and more dependable. He’s even reaching out to and supporting Hannah’s friends, who he hates.

Hannah, on the other hand, hasn’t really changed much at all despite all her claims otherwise. The first episode showed Hannah throwing a dinner party for Marnie and Shoshanna with Adam grudgingly agreeing. While consoling Marnie, Hannah says, “We’re not gonna talk about my book right now. This isn’t the appropriate time to discuss my incredibly exciting professional endeavor” while clinking glasses to her success. Yet again, Hannah depicts just how horrible people can be to each other in the subtlest ways. This is what makes this show so compelling and so well written for me, but also what makes me the most uncomfortable.

The second episode dealt with Hannah, Adam, and Shoshanna taking a road trip to pick Jessa up from rehab. Despite the fact that the rehab has an open door policy, Jessa has told Hannah that she needs to come sign her out. Jessa needs the attention and doesn’t like to be alone.

In the midst of Shoshanna and Hannah congratulating themselves for being such good friends, Adam points at that maybe staying in rehab would be the best thing for her, but they venture on.

Meanwhile, Marnie yet again feels like she is being excluded. There has always been a sort of rivalry between her and Jessa and she was left out of the road trip. Hannah even started to lie about it before quickly changing her mind. Maybe she has changed after all.

Shoshanna is being hilarious as usual, not quite understanding the gravity of Jessa’s situation and being baffled by the fact that Adam has never thought about what his favorite utensil is. Even with her trying on a new personality, Shoshanna is just as entertaining as ever.

These two episodes were especially Jessa heavy. We don’t usually see too much of Jessa, so it was interesting to see where she’s been. Until he ruined it by trying to sleep with her, Jessa was beginning to learn a lot about life and herself from her fellow addict. We got to see a deeper side of her, if only for brief moments between berating her group mates. While she spent the majority of her time blowing it all off, tearing her fellow addicts apart, and causing trouble, she ended up promising Hannah that things will be different and despite her anger, Hannah showed Jessa just how much she means to her.

I’m excited to see where this season goes. I’d be really excited to see more of Ray because he’s hysterical. Hannah, Marnie, Shoshanna and Jessa are all in very different places and it’ll be interesting to see how they grow and how their friendships change over the course of this season.