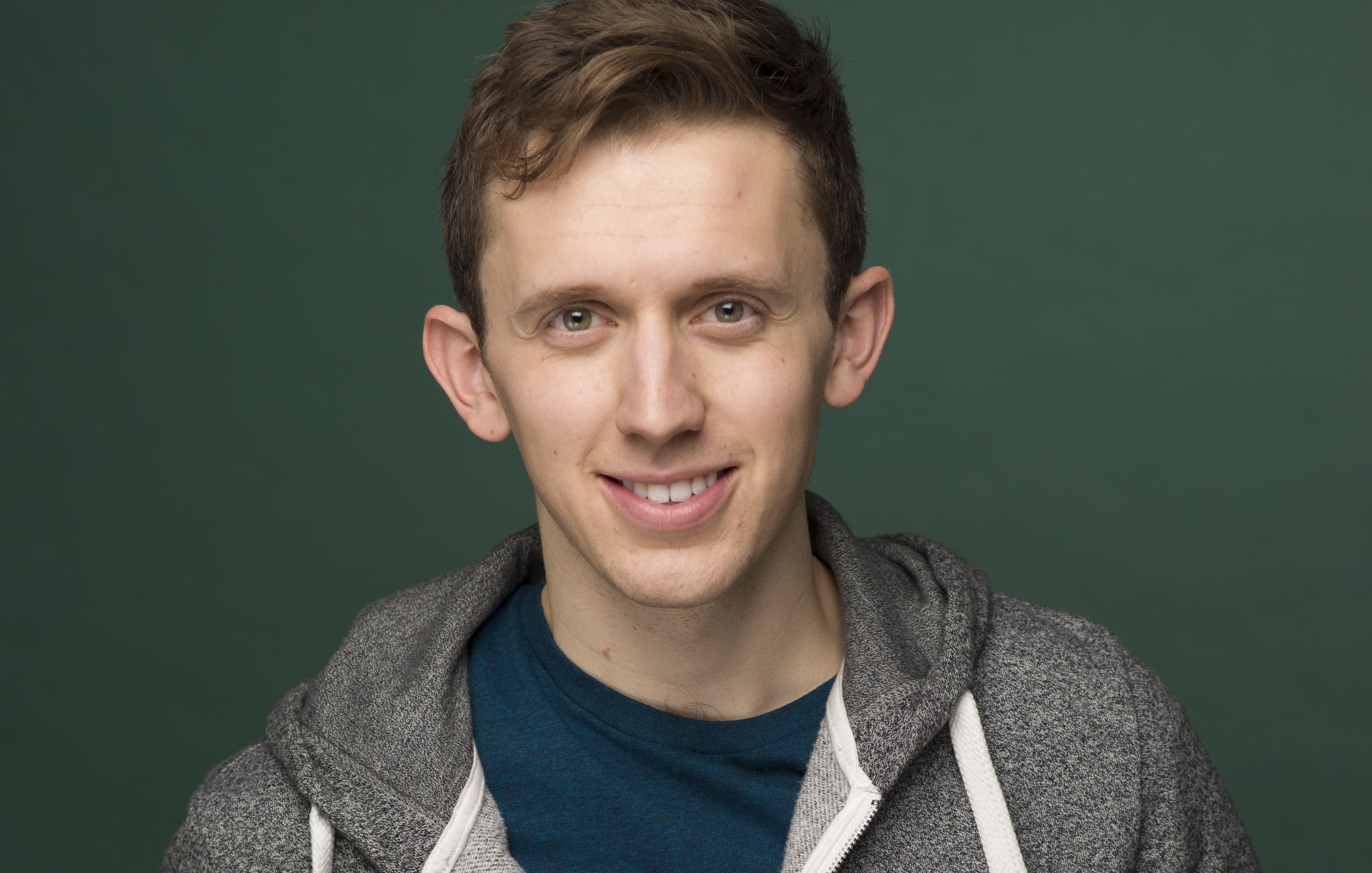 A Best Supporting Actor nominee in the regional category this year, Scott Farley’s dynamic take on the much-abused and abusing Malvolio in Matthew Gorman’s scholarly Twelfth Night was one of the highlights of Hart House’s standout 2013 season.

The chameleonic actor, currently tearing up the casio as George in Hart House’s delightful production of The Wedding Singer, answered a few of our questions about the bard’s most tragic comedic character.

Can you remember the first theatre production you ever saw?
Somewhat. When I was five years old I saw the Toronto production of Beauty and the Beast. My family and I sat front row centre, so close that we were getting spat on by the actors, and at one point a bobby pin dislodged itself from Belle’s hair and hit my dad square in the forehead; it was that moment when I realized actors were of the unruly sort.

What’s your favourite role you’ve ever played?
That’s a tough question because I have fond memories of many different parts without being able to pinpoint one favourite. In school I played Jordan Knockem in Bartholomew Fair by Ben Jonson and that was a blast to play because he was so dirty. I like the scummy roles. Thinking of him I am overwhelmed with imagery of horses, a brown colour palate, tattered dirt stained wool socks, and a love of plus size women.

Do you have a dream part you’d like to play one day?
I have many, but recently (because I am working on a musical) I have been thinking a lot about the Emcee from Cabaret. The Emcee is a part I have wanted to play ever since I saw Joel Grey’s captivating portrayal in the 1972 film adaptation. In terms of Shakespeare, I must play the Richards one day; both the RII and RIII intrigue me greatly!

How did you get involved with Hart House?
The most unromantic story ever: I went on the TAPA blog. I saw the audition posting for Twelfth Night. I thought “Oh TN, that would be fun.” I wrote an email with my headshot and resume attached. I received a very thoughtful response saying “We received your email! Stage management will be in contact with you shortly so never email me again”. Stage management was indeed in touch. We worked out an audition time. I was coming from across town. I miss-managed my time and was about to be late. I called Mary (the stage manager) feeling embarrassed. I lied and said I was kept longer than expected at my “appointment”. I arrived. I was sweaty. They were kind; let me gather my wits. I went in and did a speech from Love’s Labour’s Lost. Matt (the director) handed me the letter scene excluding the Toby/Andrew/Fabian interjections. I sat outside. The Actor Prepares. The actor sweats. I go back in. I read it. It’s mediocre work. On the line “…quenching my familiar smile, with an austere regard of control-” I achieve hilarious mouth movement. Later I receive an email offering Alexander the part of Malvolio. I question. Copy & Paste was blamed. We talked moustaches. Hilarious moustache was achieved.

Had you played much Shakespeare before?
No. I do not have nearly as much Shakespeare as I would like to have under my belt. Fun fact though: I used to hate Shakespeare. It wasn’t until I went to the Stratford Shakespeare School right after high school that I started to really love it (And I’ll tell ya, It was all the fighting and sex that did it for me…in the PLAYS not at the school. Get your mind out of the gutter). Then in between my second and third year at school I had the pleasure of going back to the Shakespeare School to work as an Assistant Director. The team of artists at the festival really know how to teach and excite you about the Bard’s work; I would suggest it to any high-schooler who thinks he/she despises Shakespeare.

What were some of the challenges of setting the entire action of the play in a bar?
Setting TN in a bar makes mostly everything public, except for, I think, one spot, everything that was spoken was heard by at least one other character. For example, the entirety of  Olivia and Cesario’s first meeting was overheard by Malvolio, making it clear to him that Olivia was lying about the page leaving Olivia with a ring.

What were some of the unique elements that you brought to the role of Malvolio?
I never thought that I would get to play Malvolio so early on in my career. Based on who I am and what stage I am at in my life, I felt I needed to approach him from the mindset of a younger guy who thinks he is entitled to everything and tries to act more mature than he is. HOWEVER, when he is alone he lets his true self out and is indeed more boyish, allowing himself to get giddy with excitement when the prospect of achieving higher status is delivered to him (by the grace of Jove) in the form of a letter.

Matthew Gorman is also nominated this year for directing Twelfth Night. What would you say is the most important conversation you two had in developing your interpretation of Malvolio?
Probably the most important chat we had would have been about Malvolio’s motivation to obey the imploring of “Olivia’s” love letter. Is it genuine love for Olivia or is it Malvolio’s own quest for higher status that drives him to change his humours and sport unflattering colours? It’s a fine line because of his humiliation at the end of the play. I believe Malvolio is so self involved that his true motivations lie in achieving the higher status he so desires BUT I also believe that if it’s all about a power grab his fall at the end of the play is not as juicy, causing the stakes to be lower. It needs to be more personal. In the end, I think he does develop some feelings for Olivia, as the woman who plays a specific part in his overall fantasy.

The play ends with pretty much everyone happy, except Malvolio. He exits swearing his revenge. Write me a two-sentence sequel.
This question scares me because I am no Shakespeare. But Malvolio and Antonio both end the play not achieving what they want so I just figure they become great friends (or “friends” if you will) and go sailing together in order to forget their Illyrian troubles.

Did you have a favourite moment in the production?
I was a big fan of Arlin Dixon’s (Olivia) delivery of “In his bosom, what chapter of his bosom”. It always made me giggle.

Which directors and actors have had a major influence on you throughout your career?
I am so lucky to have worked with extremely talented artists who have helped me (and who are still helping me) change and grow. I believe it is very important to have mentors and teachers (in whatever your craft is) who keep challenging you to better your work. I owe a huge thank you to Heather Ashby for instilling the love of acting in me and to Jeannette Lambermont-Morey for changing how I approach text.

In terms of actors, the whole SCTV crowd really influenced me. John Candy in particular was a real idol of mine. Amongst others are Christopher Guest, Mike Myers, and Tina Fey.

Do you have any favourite people to work with?
It being so early on in my career I still look to my wonderful classmates who I graduated with at George Brown and luckily I have already had the pleasure of working with some of them outside of school, including: Merritt Crews, Erin Eldershaw, Michael Man (A Midsummer Night’s Dream…A Puppet Epic! with Shakey-Shake and Friends), Alexander Offord (Twelfth Night at Hart House) and currently Matthew Pilipiak (The Wedding Singer at Hart House). Hopefully I will keep getting to work with these talented people!

What are you doing now/ what’s your next project?
Currently I am running The Wedding Singer at Hart House Theatre playing now until January 25th.

In February I am helping to create the new play Komunka from the minds of Yury Ruzhyev and Sky Gilbert, culminating in two workshop performances on Feb. 23rd. It addresses heavy political views of modern Russian citizens regarding gay rights, immigration/emigration, and the economic situation of the general public. There seems to be no better time to tackle these issues than alongside the 2014 Winter Olympic Games in Sochi.

Spring holds a thrilling new venture for me as I have a television series in the works but as I haven‘t signed anything yet I should not say anything more. I am keeping busy and am having blast working with such fantastic people!