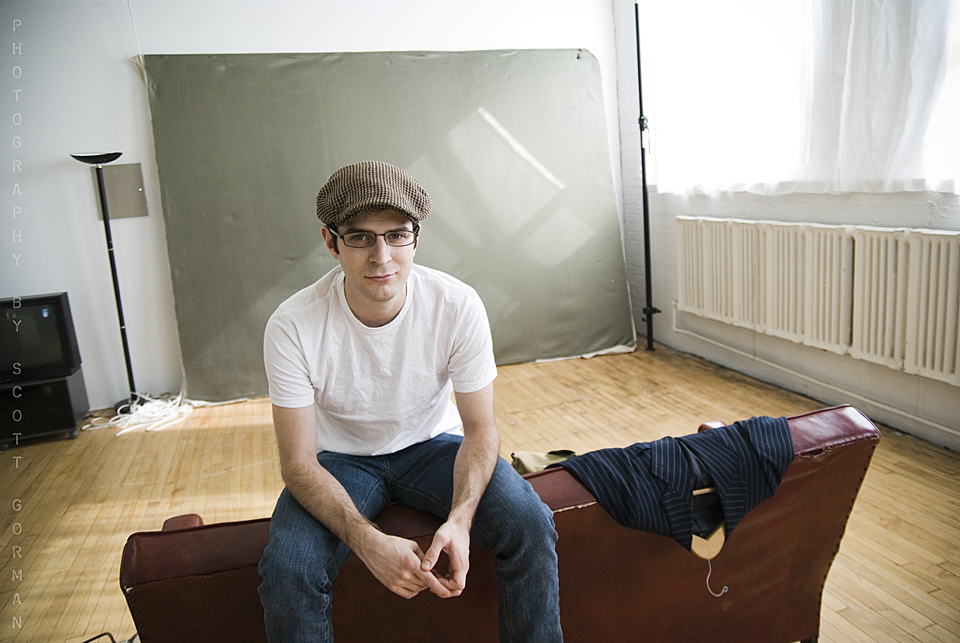 Matthew Gorman’s production of Twelfth Night at Hart House was one of our favourite Shakespeare productions of the year. He took a hopelessly over-produced text and made it interesting again by taking it seriously and keeping the fun.

Can you remember your first experience with theatre?
My family spent a year in the UK when I was 5 going on 6 and there are two shows I can remember. I only have images of both, but they’ve stuck for 25 years. We saw a panto of Cinderella and when they were putting the pumpkin carriage together, they asked everyone to look under their chairs and under my seat was a bundle of sticks. Cinderella came off the stage and asked me for them. Mind – Blown. The other was a production of Ragnarok which I was probably too young to be seeing. I was terrified.

You’re also a writer and actor in addition to directing. Is one of those roles closest to your heart?
I started as an actor and I am still an actor, so that’s probably what drives me. Whenever I get a chance to work in another context, I always think as an actor first, and my concern is always for what the actors are doing. I try to write and direct shows I would want to act in.

Do you have any dream projects?
A couple. As an actor, Iago. As a director, Michael O’Brian’s Mad Boy Chronicles. As a writer…something about tasmanian tigers, or the Napoleonic wars…or both.

Which directors, writers and actors have had a major influence on you throughout your career?
A former teacher of mine who has become a great friend, Peter Wylde is one of the only people (other than my wife, who is really the only person I’m ever trying to entertain) who’s opinion is incredibly important to me. He taught two courses at school that were so radically different and thing none of us were ready for, but have really shaped my approach to work. First off, it’s work, it’s not your life. If you aren’t a human being off stage, you can’t be one on stage. Second, truth is the only thing that matters. Whether you’re silent on a bench, or covered in Restoration make up, if you’re lying, the audience can tell.

What’s your favourite production you’ve ever worked on?
It’s hard to say. The production of Philip Ridley’s Vincent River that Cart/Horse put together a few years ago is very close to my heart. A fantastic creative team and a knockout script.

How did you get involved with Hart House Theatre?
A few years ago, I did a show with Canopy Theatre, which was a bit of an off shoot of Hart House (that hopefully we can all find a way to revive). I got to know the group and started hanging around and ended up ADing on one of Canopy’s shows. For the next few years I kept trying to throw my two cents in when chatting about Hart House and what shows/directors were being thought about. I suppose I wore them down eventually.

Were you assigned Twelfth Night or did you present the idea to the producers?
A little of both. By keeping an ear to the ground, I knew it was on the table as a show being considered. So when I was prepping pitches to take in, I was armed with ideas of how I’d put it together. It’s always been a favourite, so I pushed pretty hard for it when meeting with the company.

The choice of setting the entire play in The Elephant was a bold one. How did you land on that idea? What advantages and challenges did the single location give you?
I wanted a certain type of music in the show, and so I needed a place for that music to be at home. When I thought about the kind of town where that music would live, I started working the ideas out of who everyone would be and how they might come to meet each other. The single location and the shortened time span makes the action tick along quicker, raising stakes and making the characters’ decisions more immediate. It did mean we needed a million doors though.

Did you cut the text yourself? How did you decide what could be condensed or discarded and what absolutely needed to stay?
I did the initial cut myself. I’m very possessive of the script as a director. Once I had a draft I was starting to be happy with, our company dramaturg, Susan Bond, and my AD Grace Smith both started to take a look and the three of us fleshed out the final draft. One thing I think Shakespeare in Toronto could use a little more of is irreverence. There are a number of productions going up (which is great) but I find many of them slavish to the text and sacrificing a lot of story and character for poetry and indulging in verse. When we went through Twelfth Night, we obviously had time and place concerns to look for (changing “three months” to “three minutes” and such) and pacing. We knew we wanted to combine a few characters so we had to make sure that was consistent. At the end of the day, we wanted to make sure the script contained the story we wanted to tell, that we honoured the author’s intent and had a show that could maybe surprise people.

Walk us through your casting process. Were there any roles you struggled to fill? Did anyone walk in to audition and do the part exactly as you’d envisioned?
Hart House has a policy to see everyone who submits, unless they’re known to be unpleasant, so we saw a LOT of people. Which was great because we really ran the gamut of personality/talent/niceness etc.. A few people walked in and we knew we wanted to cast them as something right away, even if we didn’t know as what. A few people we had to chat about and do a little checking up on. The only role we couldn’t find through auditions was Toby. I didn’t want a typical red nosed drunk, so it was hard to find an actor who’d be able to create something new with the part. Dave Tripp is a favourite of mine and once I got permission from his wife to cast him, I offered him the part. The cast we put together were a lovely bunch to work with, which is one of the most important things I look for in an audition. We have to spend a lot of time together, so it’s important that you’re someone it’s nice to be with. I would have liked to see a bit more diversity on stage, but  these were the people who walked through the door.

What were some of the key things you focused in on for your interpretation of the text?
Pace. Story. Clarity. In that order.

Your production featured a lot of standout moments from unexpected characters. In your opinion, who is the most underrated character in Twelfth Night?
Antonio. He’s gay, that’s just what’s on the page. So to play his text as it’s written and to let that character be honest about his feelings was really touching to watch. There’s a lot of sadness in that character and in this play and you have to honour to counterpoint the happiness of the love stories and the twins reunion. A lot of that credit goes to Christopher Legacy for really caring about his character and filling his stage time with really careful thought and emotion.

Two of your actors- Alison Blair and Scott Farley- received Best Supporting Actor nominations for their roles as Maria and Malvolio. Do you remember a key moment in the development of those parts?
You can either cast an actor and try to get them to play a role in a way you want, or you can cast an actor, get to know them and see how the character fits that person. The latter just makes more sense. Alison and Scott are both strange, quick-witted, charming and confusing people (those are all good qualities). There was a moment when Scott added about sixteen extra “no’s” to a line, when I asked him if he could cram everything he just did into the two “no’s” that were on the page, and he did, I knew we’d be fine. The day we discovered Drunk Maria in the background of a scene, I knew we had found our Maria.

What did your designer say when you pitched her your high-concept plan for the Malvolio-in-a-box scene?
Jenna can doesn’t get phased easily. We were in a bar at the time, so I don’t think she was shocked. In a lot of ways, the set was quite simple, big, but simple, so the box scene was one of the places where we could get a little more inventive. It’s important to leave something in the process for your design team to figure out, otherwise, why have you asked them to be part of the show? A good deal of credit for the overall tone of the show belongs to Jenna McCutchen and our magician of a lighting designer, Raha Javanfar.

Write me a two-sentence sequel.
Fabian’s bear-baiting business takes off thanks to Sir Andrew’s patronage. A double honeymoon quickly turns into a Noel Coward play.

Do you have a favourite moment in the production?
Viola/Cesario joining in Feste’s song.

You’re clearly a real Shakespeare scholar/enthusiast/whathaveyou (greetings, comrade); what’s your favourite play in the canon and why?
I think I like whathaveyou the best. Scholars scare me. As a piece of writing, Hamlet, because it’s not a play, it’s a marvelous swirling disaster of ideas crammed into a format that can barley contain it. As a play, Lear gets me every time. Even a bad Lear is still Lear.

If you could play any part in the world, what would it be?
Juliet.

What are you doing now/ what’s your next project?
I’m directing a show as part of this year’s Playwright Project which I’ve also been curating. It’s a lovely group of people putting it together this year and it should be a great two weeks of really interesting work.