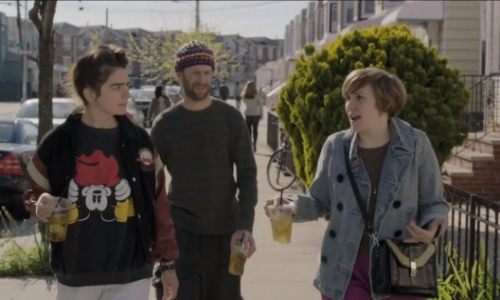 This episode of Girls focused on Hannah’s reaction to her editor David’s death and her at least perceived lack of emotional depth. This episode felt incredibly familiar to me and kept pulling me back to My So Called life and Freaks and Geeks more so than most episodes.

This episode discussed the grieving process and whether or not there was a right way to grieve or react to death. While Hannah’s reaction to David’s death is not the most gracious and doesn’t make her easy to sympathize with or make her any more likeable, it’s the way she tries to make herself seem like she’s reacting the way she’s supposed to that makes her even more self-involved.

Hannah doesn’t feel anything about David’s death, except frustration over not knowing what will happen to her ebook. This causes Adam to become upset and concerned, and she doesn’t help matters when she tries to make him feel better when she says she thinks about his death all the time. She has more and more people tell her she’s a heartless person, and she soon starts telling people that her close friend has died; playing it up for others and playing it up for herself in her mind.

Hannah tries to go to others to see how they treat death, and she eventually ends up running around a graveyard with Caroline, Laird, and Laird’s dead turtle. Caroline tries to get a reaction out of Hannah by telling her an incredibly touching and heartbreaking story about Adam’s commitment and care of their dying cousin, a story that turns out to be a lie. The ever loving and sentimental Laird, however loses it and tells them, “just because it’s fake, doesn’t mean I don’t feel it.”

Hannah, in one of her worst moves yet, uses Caroline’s fake story as her own and tells it to Adam in order to prove she’s an emotionally mature and caring person. She says that it takes her a while to process emotions. This whole scene was incredibly obvious. She is starting to get worried that Adam will see that he’s more complex than her. He will see things he doesn’t like and will want to leave her. Adam is clearly the better person in this relationship right now and he shows it when he talks about what it would be like for him if Hannah died. So, she tries to be someone else. This discussion, even though it was a lie, seemed to bring Hannah and Adam closer than ever.

David’s death causes others to think about death as well. Shoshanna and Jessa talk about people they knew who have died. Jessa’s good friend died and she decides to finally visit her grave, only Jessa learns that her friend never really died. She faked her death in order to get away from Jessa and her destructive ways. Hopefully she will learn something from this.

Marnie, on the other hand, had no part in this and was really doing her own thing this episode. She’s trying to act like she’s okay. She’s working out like it’s the most important thing in the world, pretending to be strong, but as soon as she hears her music video being played at work, she immediately quits because she deserves better and deserves to be working with fancy people. Marnie really needs to realize that she’s not as superior as she thinks she is.