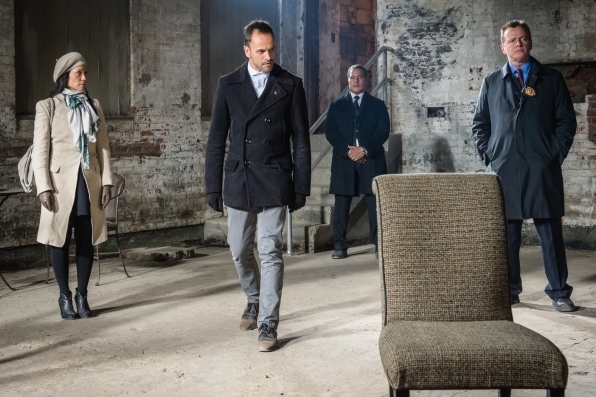 Elementary started the new year off right: by featuring a crime full of twists and turns, and by bringing back their best guest star to date. (spoilers ahead).

The action started when a little girl was kidnapped and held for ransom. Things got complicated when it became apparent that the kidnapper was one of Moriarty’s old lieutenants. The only way to get the little girl back is to turn to Moriarty, who is still imprisoned, pending trial. There are some very excellent Moriartys out there in other adaptations, but guest star Natalie Dormer is the best Moriarty out of all the Moriartys.  She is closed off, yet charming. She is detached, yet shows unexpected bursts of emotion. In this episode she was a worthy opponent, but also a victim.

Dormer has an incredible natural presence and dominated every scene she was in. Trusting her would be a terrible idea, but at the same time, it was impossible not to be drawn in. Moriarty is a criminal genius, so whatever comes out of her mouth, you can be sure she is in some way manipulating you. One of the things that kept the episode interesting was you weren’t sure of Moriarty’s motives until the end, when it was revealed the kidnapped girl was actually her daughter, who she had given up for adoption years ago.

Elementary has done a very good job at taking the preconceived notions that come with an iconic character such as Moriarty, tossing them out the window, and making them work. Making Irene Adler and Moriarty one in the same was a gutsy move (making Moriarty a woman period was a gusty move). Having Moriarty be a mother was another unexpected choice, but it worked. It showed a more human side to her, without softening her. If anything, it emphasized her cunning and ruthlessness, both of which she used manipulate everyone around her, escape, and punish her daughter’s kidnappers.

The more human quality was a necessary development in her story arch; Holmes clearly still harbors feelings for her. It’s slightly complicated, now that he knows the love of his life was just a guise of his arch nemesis, but the fact Moriarty is capable of evolving means their relationship too can change. She spent a good deal of the episode trying to help track down the missing girl, and trying to convince Holmes that she actually was trying to help. Holmes spent most of the episode stoutly not believing her. Exposing a human side to Moriarty was yet another turning point in their relationship. Trust might not anywhere in their near future (or ever), but it at least moved their relationship forward a little bit.

While Holmes and Moriarty’s relationship highlighted both of their emotional progression, when Moriarty and Joan interacted, it was just funny. Moriarty tried to simultaneous get a rise out of Joan, and genuinely converse with her in order to ‘figure her out’. Joan on the other hand remained completely indifferent to her; she already has one emotionally stunted genius she has to deal with on a regular basis, and she has no interest in another one. Everyone else seems is wary of Moriarty, or plays her games to try and get something valuable from her (mostly information), so Joan’s ‘if you don’t hurt Sherlock, then I really don’t care’ attitude was refreshing.

Joan and Sherlock had limited interactions this episode, but the few scenes they were strong. Their strong relationship is the center of the show anyway, so if they wanted to have less interactions between the two main characters so they could have more time with a guest star, it’s fine.  (They set it up so Dormer could potentially come back, but with her busy schedule – Game of Thrones and The Hunger Games, we might have to wait a while).  We’ll go back to our regularly scheduled Joan and Sherlock adventures next week.

It’s good to see Elementary hit the ground running after a midseason break. They set up some interesting arcs (Bell’s injury, Sherlock’s continuing emotional development) during the first half of the season, and they haven’t forgotten about it. It’s understandable that they didn’t feature Bell’s storyline, since there was a lot going on in the episode and to would have felt crammed in there. But the one shot of him struggling with target practice, let us know the show hasn’t forgotten. It was a good reassurance that the show remembered the good set ups they had so far and won’t neglect them. With that in mind, as well as the strong writing and acting, it feels like 2014 is going to be a very good year for Elementary.