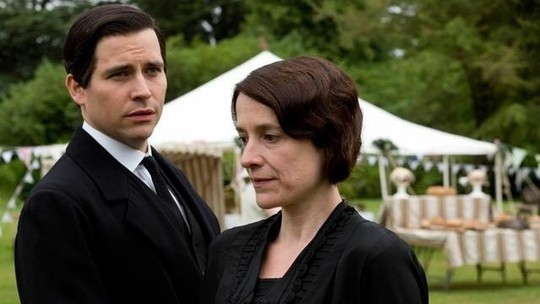 Downton this week was fine. It wasn’t fantastic, but it wasn’t terrible. It fell somewhere squarely in the middle. After weeks of stepping outside of its comfort zone, Downton retreated back to the familiar. There was nothing wrong with it, but it didn’t shine like it did in the past few weeks.

Thomas is back to his old scheming ways, having gotten an acquaintance to take the newly vacant lady’s maid position so she can be his spy. After last week when Thomas seemed to soften, albeit slightly, it’s annoying to see him back to his smarmy self. He has had some great character moments that are completely forgotten about when they should be built upon. He said Lady Sybil was a nice person, and that Anna was not his enemy, but these feelings are never reflected in his actions. It feels like Downton keeps teasing at character progression with Thomas, but they’re afraid of losing their go-to troublemaker, so they never actually follow through with it. He doesn’t have to suddenly be chummy with the rest of the staff, but it would be nice to see some change that sticks.

The entire episode felt like it was retreading old ground. Mrs. Patmore was wary of technology, Isobel and Violet squabbled, and there was more drama with the young kitchen helpers. Lady Mary has another potential suitor, who is Evelyn Napier, a character introduced in season one. It’s not that the episode is inherently bad, but the entire thing felt like déjà vu because it has all been done a hundred times before. Napier is fine, if somewhat generic. He never really made an impression when he was on the show before, having been overshadowed by the scandal with the Turkish gentleman. He’s pleasant enough, but I never felt an overwhelming need to reintroduce him to the show.

The most unexpected thing that happened this week was Tom said he was thinking about moving to America, but I would shocked if they follow through with that idea.

The show is following the same winning formula that won it a devoted fan base, but at this point it feels like they’re going through the motions, and repeating what won them earlier success. It’s a shame, because the first few episodes this season showed that it could take risks that not only paid off, but fit in with the more repetitive plots, creating something that was new enough to stay interesting and fresh, but was still familiar and consistent with the show’s tone. Hopefully this episode was just a blip in an otherwise strong streak.