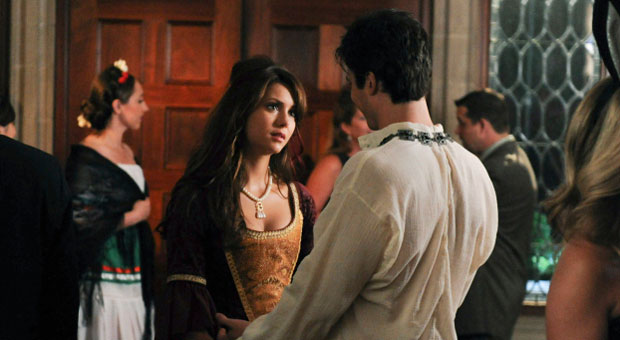 Ten years ago, when DVR and catching up with shows online wasn’t an option, people had to resort to the “Last time on…” in order to understand what they missed on the last episode of their favourite shows. But since then, I don’t know anybody that watches anything out of order. So why is it, the Vampire Dairies feels that it’s necessary to inform me of what has been going on all season in some strange narrative recounted by a primary character? I understand the need to recap just in case I forgot what has been going on, but can’t they just stick to a “Last time on the Vampire Diaries…” and splice in clips of scenes that inevitably spoil an event that’s about to happen? It makes me so much better at predicting what is going to happen in the episode, and in this episode, I really needed that.

Before I get to the strangest twist “Monster’s Ball” threw our way tonight (hint: it’s not that the diary in The Vampire Diaries is back, although, shocker!) let me wallow in my sadness since Tyler has once again been taken away. I say “taken away” and not “ran away” because despite Caroline’s declaration that if he leaves they are over for good, I still believe they are end game. Call me delusional, but I hold out hope, mostly because the last thing I want to see is either of them on The Originals.

Now to the big twist of the episode: Nadia is Katherine’s daughter! You know, that kid she had in Bulgaria that her dad took away from her before she was banished to England? No? Me neither. That is until Nadia mentioned that Katherine killed her mother by hanging her and I remembered the only person Katherine hanged was herself and then the little light went off. I wonder if I can count this as something I’ve predicted because I still got it before Nadia said the words “I’m your daughter.” It counts, right? The funniest thing about this twist is that Olga Fonda (Nadia) is actually seven years older than Nina Dobrev.

Nina Dobrev’s other half, Elena, tried to make sense of her dearly departed roommate’s death and subsequent cover-up. She got as far as learning that Dr. Maxfield knows about vampires and that the new kids name is Aaron. A detective she is not. She didn’t even realise her boyfriend was snapping the neck of her ex-boyfriend all night. Plus, bleak costume choice for a new couple. Foreshadowing perhaps? Not the beheading part, but you know, things not ending well.

Damon decided the best way to bring Bonnie back was to have Silas die as a witch so nature could have its balance. So he and Silas worked together to break the bond between Stefan and Silas (hence the neck-snapping) in order for Silas to regain his magical powers and figure out how to get rid of the supernatural purgatory so he can die and stay dead. But since new Stefan is a badass, he decided to play dead, snap Damon’s neck, and then reveal everything to Qetsiyah in time for her to put Silas down again. This time though, instead of Katherine feeding someone to Silas, she is the one being fed from. And naturally, Katherine lives, which is kind of unfortunate because she used to be so fun and now she’s not. Hopefully, this near death experience means she’s a vampire again (seriously, no one is allowed to be human anymore) and can go back to being the less grating doppelganger.