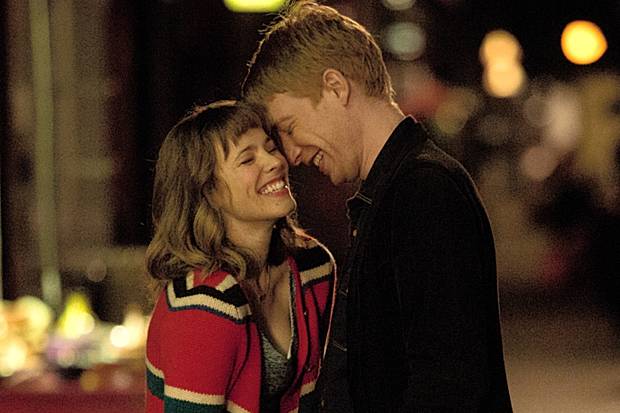 Richard Curtis Returns with About Time

Richard Curtis is a man who is extraordinarily good at what he does. He writes (and sometimes directs) British romantic comedies and he does it with more consistency than almost anyone else working in that genre. He has more movies on my favourites list than any other writer (even Aaron Sorkin and Nora Ephron top out at two a piece) and, within the most easily trivialized genre in film, he continuously delivers an emotional experience largely unparalleled. Who doesn’t tear up when Billy Mack tells Joe that he loves him, or break out in a wide grin when Bridget Jones discovers that nice boys do, in fact, kiss like that? With About Time, his new time travel film starring Domhnall Gleeson, Bill Nighy and Rachel McAdams, Curtis has stepped further out of the confines of the genre he’s spent decades redefining to create a film that’s too funny to be a drama, too intense to be a romcom, and too sweet to be anything else. It’s one of those fabulous, hard-to-classify dramedies, the likes of which made the 2012 film season sensational but have been largely absent in 2013. Until About Time.

The first thing Curtis does right is establish a simple but strict set of rules for his brand of time travel. He highlights only the technicalities that resonate emotionally, tossing the rest into the pit of unnecessary exposition that good filmmakers have the confidence (and trust in their audience) to cut. The script that fills out the thoughtful time travel guidelines is a beautiful one filled with tangible characters, evocative themes, and plot twists that are either genuinely surprising or emotionally hefty enough to forgive their inevitability. It’s also really genuinely funny and sweet and sweeping in that uniquely Richard Curtis-y way. He never throws lovers together who don’t feel somehow clickingly perfect as a unit; Curtis earns every giggle and “aww” his romances receive. In creating a single, long-spanning relationship that establishes itself with a winning mix of audio-only blackout, delicious counterpoint dialogue, and giddy montages, Curtis has created his most vivid romance yet. It stands out not for its gleeful beginnings but for its steadfast continuation throughout the highs and lows of the film post-happily ever after.

The romance between Tim (Gleeson) and Mary (McAdams) is far from the only love story in About Time and it’s that very dynamic that makes it so strong, sitting against the backdrop of the low key love story between Tim’s parents (Nighy and Lindsay Duncan), the presence of his warmth-emitting Uncle Desmond (Richard Cordery), and the unshakeable bond he shares with his beloved sister Kit Kat (the soulfully wacky Lydia Wilson). The heartrending love that develops between Kit Kat and Mary was also a highlight for me. I’m a little sister myself and I know what it is to love an (almost) sister-in-law with the sort of unbridled appreciation that Kit Kat throws Mary’s way (and is returned in quiet dedication by Mary). About Time is about all these love stories that exist within one small family unit, with Tim at its centre. It’s about Tim and Mary, Tim and Kit Kat, Tim and his children, but mostly it’s about Tim and his Dad. If you’ve seen the trailer, you’ve pretty much seen the plot. You know that Nighy is about to spend the next two hours of your life being the most brilliantly exceptional on-screen father and you know that he won’t make it out of the film alive. You’ve already experienced the utter gorgeousness of that moment when Gleeson counters Nighy’s “my son” with a simple but loaded “my dad”. It’s astounding, then, that Curtis, Nighy and Gleeson are able to carve such emotion out of something you thought you’d prepared yourself for. But please don’t misunderstand me; About Time isn’t a deliberate tearjerker obsessed with its own bittersweetness (like, say, The Notebook). It’s actually wildly funny and ultimately uplifting, a feel-good film full of catharsis of every kind and the sort of real-life love that makes you remember why you love love stories.

It also stars Domhnall Gleeson in what should be his breakout leading role. When I first spotted the poster, I got a thrill from the idiosyncratic choice of the erstwhile Bill Weasley as a romantic lead opposite a universal beauty most famous for romancing Gosling. Gleeson is lanky and bumbly and unconventionally handsome in that way that I would prefer more leading men to be (as opposed to, say, the Channing Tatum type) while McAdams felt like more of an easy choice (that incomparable sparkle of hers is so bright that it actually started to get annoying when her character would express her insecurities). But whatever loveable underdog credit I was giving him going in didn’t do Gleeson any good because he was already running away with the movie by the time I’d figured out how to pronounce his name. He’s incredible, turning in a performance so well-timed and nuanced that it feels as though Tim is your oldest friend and soulmate after only a few hours in his company. If the world is the place it should be, it won’t be too long before Domhnall is a name everyone knows how to pronounce.