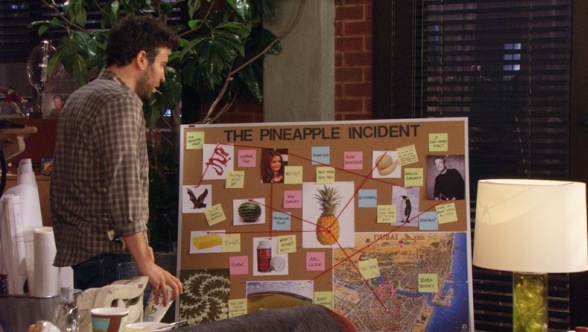 When I think of the beginning and end of things, I don’t tend to think of my parents, but in this week’s How I Met Your Mother, “Mom and Dad” beginnings and endings are ever present.

This episode had the return of all of Barney’s family: James (Wayne Brady) Loretta (Frances Conroy), Jerry (John Lithgow), and James’ dad, Sam Gibbs (Ben Vereen). This meant the return of Barney’s childhood fantasy of a whole family. After he sees Jerry and Loretta exchange polite “hellos” he convinces himself they’re still in love and makes it his mission to get them back together. So he gets Ranjit (Marshall Manesh) to drive Cheryl (Nancy Lenehan) away by convincing her that Jerry wants them to go parasailing. He then traps his parents in the elevator together with a romantic meal and music. James convinces Barney that it’s a silly idea, only because he wants his parents together. Cue a full out family musical number, with James and Barney yell-singing at each other.  This was probably the writer’s best idea, since anything that involves Wayne Brady singing is a fantastic idea, but Wayne Brady and Neil Patrick Harris singing to each other? That’s just magical. Anyway, much to Barney’s chagrin, Sam and Loretta are actually secretly together, beginning their new (old?) relationship.

Unfortunately, the song and dance number was probably the only highlight in a lackluster episode. The show should have known there was only so much they could do with a weekend for a season.

In Ted’s world, he’s convinced someone has sabotaged the Wayne Gretzky photo Barney is giving Robin for their wedding. Bring on Detective Mosby and Lily reminding us that Ted still hasn’t solved the mystery of the pineapple incident. It may not be the perfect ending, but at least we’re reminded it’s one of those things you don’t ever get to know the answer to. In the end it turns out to be Billy Zapka, who just wanted to be the hero for once. I could see this being really funny if I wasn’t born in the 90s and completely missed out on all Zapka’s villainess of the 80s.

The best ending of all though, is the end of Marshall’s road trip from hell with Daphne. Daphne ended up at her daughter’s school in time to see said daughter rage against the environment, making it the perfect time for Marshall to excuse himself. Maybe now since he’s in New York, we finally get to see him with the gang getting ready for the wedding. Hey, I didn’t get a glimpse of the Mother this week, I deserve never having to see Daphne again!