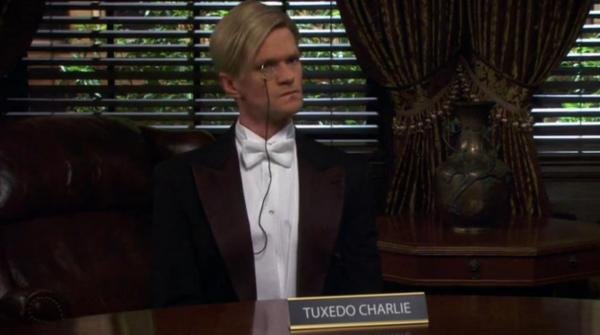 How I Met Your Mother 911 “Bedtime Stories”

When an episode of television attempts a gimmick, it can either succeed or fail with no in between. Luckily for How I Met Your Mother’s “Bedtime Stories,” the all-rhyming episode, while not Shakespeare calibre, was still a hit.

The episode started with the premise that Marvin couldn’t fall asleep without the sweet sound of rhymes, so Marshall, being the great dad he is, told him three separate, mildly inappropriate, stories. The best part was when guest star Lin-Manuel Miranda (Gus, the guy on the bus) noted that the stories maybe weren’t the best children’s tales only for Future Ted to realize his mistake a little too late. Marshall claimed the kid’s don’t have memories at little Marvin’s age, until the episode wraps (also raps) up with Marvin’s first memory being the fireworks at the end of the bus ride. Let’s just hope that’s the only part of the night he does remember.

The story was told in flashback form, a story within a story, if you will (damn my Shakespeare essay for making me think of these references), so no vision of the Mother, but Robin’s old Canadian boyfriend, Simon (James Van Der Beek with a ridiculous Canadian accent) made an appearance.

First, there was Ted’s story of how he wasn’t sure if he was on a date or not with a new professor (classic Ted mix-up). The best rhyme of this story had to be when Ted’s date Lisa revealed she was a Yankees fan because she played softball in college, which led to Ted being curious if Lisa was bi-curious. “For while the date side of the line is the one we all might guess he’s in, there’ll be no joy in Tedville if Lisa is a…yes we win!” The story wrapped up when we learned that Lisa though she dated Derek Jeter, who turned out to be none other than Barney with the name “Jeter” written on his shirt.

When Ted’s story was over, Robin Takes The Cake, started. It was the introduction of both Simon, and Marshall’s struggle with rhyming a word with Canada. It’s a good thing the execs hired a rapper for a guest star as Gus took the reins with an impromptu rap, ending the rhyme with “I’m never met anyone who could clean up after Canada, except my uncle Tony from the Bronx, he’s a janitor.” The story continued as Robin became so upset with the news of Simon engagement to Louise Marsh, that she stole their wedding cake. In the end, the feat was not that she had access to a wedding cake and managed to get it outside of a bakery without anyone noticing her, let alone stopping her, but that she ate the whole damn thing. Anyone else think this was Lily’s way of making Robin fat? It was before she learned that Robin could eat anything she wanted and still lose weight, the jerk.

Finally, they ended with Barney Stinson: Player King of New York City, a title he gave himself, obviously. This story was mostly a wrap up to Ted’s. Apparently, the High Council of Players (all played by NPH) were less than ecstatic that Barney broke the boundaries and ended up with someone from the East side (Ted’s professor Lisa), while impersonating a Yankee (both other members territory). Barney apologized by rhyming, “Members of the council, bros, no one wants a war. Of course, I have not forgotten the agreement of ’04.” To settle the dispute, Captain Bill says Barney must give Bronx Donny and Tuxedo Charlie a West side girl of their choosing, but Barney counter offers by poisoning them all. It may not have been the best story for rhymes (side with side, really?) but at least we got to see NPH die five different ways. Ted settled his dispute with Barney by getting to the girl at the bar before Barney was finished his story. That’s what you get for forgetting to call dibs.

Unfortunately, Marshall still isn’t at the wedding, he missed the rehearsal dinner, and there was no sign of the Mother. Fortunately, for a filler episode, it was a damn good one.