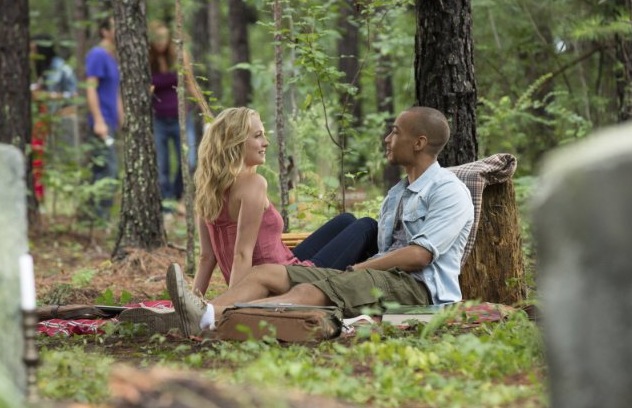 The Vampire Diaries 504 “For Whom the Bell Tolls”

For the first time in weeks, this review will not end with the question “Where is Tyler?” because thank the CW lords, Tyler is back! Albeit, only for 6.2 seconds, and he doesn’t say a word, but man have I missed that hybrid mug. His appearance hopefully means he’ll be sticking around for at least a few episodes. I’m not lying when I say I cried at the end of “For Whom the Bell Tolls” not because of Bonnie’s funeral, but because Tyler came back. Also Matt was fifth wheeling hard in that scene, so I felt for him too.

The best thing about Tyler being back is that he and Caroline can finally get back to being the amazing couple they once were. You could chalk up their final scene hug to Caroline being extremely sad about the loss of her best friend, but I truly believe this couple is lasting for good, or at least a while. Caroline backed away from her kiss with Jesse, even though she’s been lonely all summer, so even if Tyler hadn’t come back, they would still be one of the best looking couples on television.

After last week’s amnesia fuelled final minutes, this week’s Vampire Diaries opens with Damon reminding Stefan of all the people and events he’s forgotten about, minus one key event, that he dated Elena, and now Damon is. I can’t imagine Paul Wesley loving an episode more than this, since he openly gets to mock the ridiculousness of Stefan’s character over the seasons. What I fail to understand though, is why remind Stefan at all that he’s a vampire? I guess the never ageing, and blood withdrawal thing would catch up with them eventually, but at the very least, Damon could pretend that vampires love drinking from blood bags and that humans were forbidden. That way, they never have to teach Stefan, a natural born ripper, self-control. I guess this wouldn’t make for entertaining television, but I can’t help but point out the logical misstep.

Even without his memory, Stefan manages to figure out that he and Elena were once a couple and that Caroline is his best friend. He also remembers how good it is to drink blood, and is his own biggest supporter when he doesn’t kill Jesse. He gets close enough, but Caroline feeds him her blood, which leads Dr. Maxfield to decide its time for Jesse to die and become a vampire. Is no one allowed to be human in this show?

Matt, the only human, but I guess not really anymore, decided to figure out how he ended up tracking so much mud into the Lockwood mansion last week by setting up cameras around the house. He soon discovers he has someone living inside him and needs Bonnie’s help to get him out. Actually, everyone needs Bonnie’s help this episode. She got away with being dead all summer, but with no other witch to solve all the problems on the show, Jeremy is finally forced to come clean about her death. This leads to a hug I wish never happened between Jeremy and Damon. A little note to Damon: saying something doesn’t make it real. It’s not like Jeremy killed Bonnie by saying that she was dead, so the whole “Don’t say it” scene seemed like just a good excuse for Ian Somerhalder to furrow his eyebrows some more.

Most importantly, since I can’t express my happiness enough, Tyler is back!