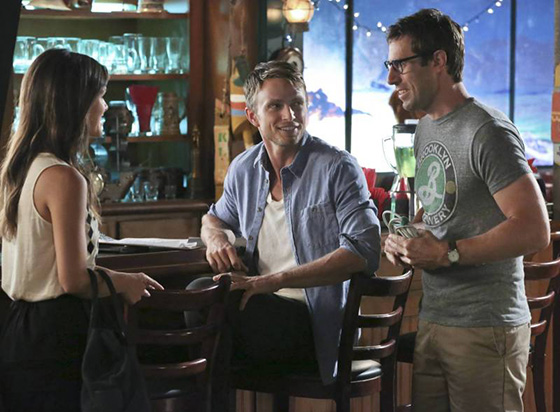 On the 7th day, the CW created country boys. Not the old racist kind, but the country boys with sweet hearts, masculine stubble, and southern accents to make my heart swoon. I’ll admit, I first started watching Hart of Dixie after the end of the first season, not because I had heard from other people it was good (especially since the only person I knew that watched it was my older sister, and what does she know?) but because it was filled with good looking people, a CW staple. While I never needed convincing that the show was any good on its own, it doesn’t hurt to have a premiere filled with those good looking people, doing their crazy country thing, and still making me simultaneously laugh and feel for other people’s heart breaks. I’m not very good at the sympathy thing, so this is a real accomplishment.

“Who Says You Can’t Go Home” premiere on its new night, this Monday, and what a premiere it was. It picks up five months after the finale, with Zoe Hart still living in New York, this time with a brunette boy (she’s had a bit of a thing for blondes in the past, hasn’t she?) name Joel, played by the guy that stole the Ice Truck Killer’s doll hand, Dexter’s Josh Cooke. She’s at her hospital stomping grounds, hallucinating people from Bluebell until Rose turns out to be there in person to let us know she left the poor Alabama town with only an email. “Separate emails, with minimal cutting and pasting,” in her defence. With this push, she is off to Bluebell for one more night to get some closure, and Brick to sign a reference letter. Was he really the best person for the job?

In Bluebell, we learn George had Joaquin Pheonixed himself into a slump after Zoe admitted her love, and ran away, and Tansy dumped him and ran away, only for both of them to find someone else. Now everyone is and at Zoe because George is no where to be found, the town is getting sued by Tansy’s new beau, “Scooter” McGreevy, and no they don’t have a founders day parade. Before long, the dishevelled lawyer rallies himself with the help of Lemon’s love for training day montages and saves the day and the parade. By episode’s end, George is left expressing what we all think in times of trouble “Can I get another very large drink?” and seen leaving with the bane of Annabeth’s existence, Lavon’s cousin Lynly.

After the parade is saved, Lavon convinces Zoe that maybe New York was the pit stop, not Bluebell. And without the inconvience of a location change, Zoe (and Joel) are staying in Alabama for good. I put Joel in parentheses because I believe his time is running out faster than Annabeth’s patience.

Since it’s only been five months since Wade’s confession, I feel that Zoe has not vetted this new guy enough. She clearly isn’t over Wade, and Wade knows it too, as evidenced by his reaction to his introduction to Joel as Zoe’s former neighbour. She clearly hasn’t mentioned Wade before, because that introduction, plus the final scene where Zoe looks back at Wade behind the bar with longing eyes would definitely raise enviable suspicions in any in-the-know boyfriends. It’s blatantly obvious that this new guy is going to be out of there in a hurry. Zoe’s dirty ex-boyfriend/ex-whatever-George-is-to-her laundry is going to be aired all to quickly for the wide-eyed novelist.

Now, I know Wade cheated and is a little “hart”-breaker, but hey, I’m not worried, there isn’t anything those baby blue eyes can’t make me forget.