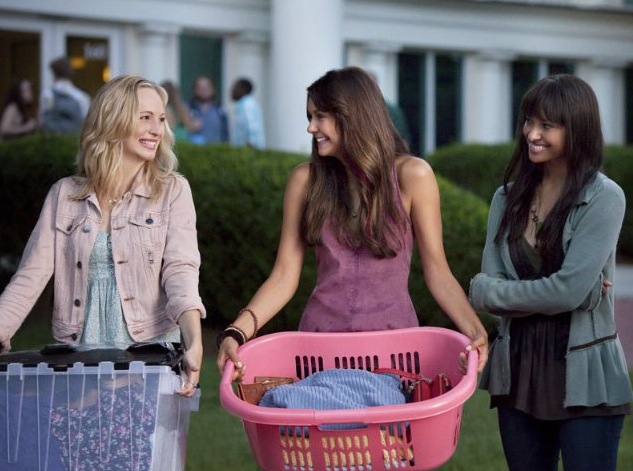 The best part of premieres is that shows always bring their A game in order to start the season off right. After the lacklustre season the Vampire Diaries had in last year, they really did improve their status to bring us a wonderful action filled premiere.

“I Know What You Did Last Summer” started off ripe with plot lines that I cannot wait to see developed. While CW shows aren’t know for their continuity, TVD did a good job of reminding us of all the tricks vampires and hunters have up their sleeves, and which rules they physically can’t break.

Caroline and Elena are starting their first year of college, (unknowingly) without Bonnie (since she died before summer started but still hasn’t told her vampy girlfriends, just her hunter ex-boyfriend). Without Bonnie, they get a new roommate in their ridiculous, gigantic, Victorian style dorm room. In a show all about mystical creatures, the size of the door room is where I suspend my disbelief most. Anyway, the new girl seems nice enough until a respect-my-privacy-but-I-won’t-respect-yours Caroline decides to drink her water only to choke on vervain. Now Caroline’s suspicious and wants to compel the vampire knowledge out of her, but Elena won’t let her because they’re trying to be normal college girls. The point becomes moot later anyways when the vampires try to get into a party only to be stopped by that invisible “needed to be invited in” threshold. The lack of invite proved deadly for the new roomie when she was chased around the house only to be thrown out the window, landing right in front of the girls with a obvious vampire bite on her neck. Suspiciously, the cops are ruling it a suicide since they found a note saying she was dealing with depression. Carlonie and Elena aren’t having any of it and have all of us wondering: who killed the roommate? How did she know about vampires? And is the killer coming after the girls next? You gotta love a mystery.

On the not so mysterious side, Stefan/Silas (who supposedly has been out of town for the last three months) reveals himself to Sherriff Forbes, only to compel her to forget about him right after, but we learn more on why he looks exactly like Stefan. The biggest question of the night remains, why would anybody whose natural face looks like the magnificent Paul Wesley, walk around all last season looking like a gremlin?

After meeting with Damon at his regular hangout, the Mystic Grill, Stefan/Silas says hi to Jeremy, who, with his hunter powers, knows that the man who just walked past him was definitely not the younger Salvatore, but Silas himself. They race home just in time to save Katherine, whose new human body does her no good in the face of evil. When Damon learns his brother has been suffering the last three months, he tries to bring Katherine back in order to trade her for the information of his whereabouts. But Katherine is a survivor and there’s no way in vampire hell will she go back there, so instead she crashes the car and escapes. Now we’re left wondering why Silas wants Katherine (maybe because she was the one to take the cure?) and how she’s ever going to run that far with blisters on her heels.

Silas decides that instead of finding the new human himself, he’ll enlist the whole town by compelling them all. Want to know if he’s serious? Just ask Bonnie’s dad, whose neck Silas decided to take a knife to. Even though she’s dead, does this mean we have a vengeful witch on our hand? Can the spirits on the other side forgive her long enough to bring Silas down for good? How do you bring in a bigger bad to top the first immortal creature?

And most importantly, when does Tyler return?