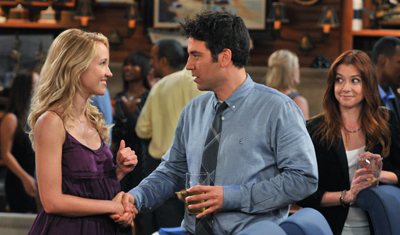 How I Met Your Mother 906 “Knight Vision”

Even when Bob Saget starts an episode with “Kids” I still forget that Ted is telling the story of how he met his wife to his children because, man, does that dude not leave out a detail. My mom told me how she met my dad in the car ride home from the grocery store, and not one detail made me cringe. Okay, maybe that his group of friends was referred to as “Joe and the Thugs,” but still, doesn’t come close to Ted’s much too detailed account of his weekend of almost romp with Cassie (Anna Camp). This week, we’re still without the mother, but at least we understand why Ted hasn’t found any body else to spend his wedding weekend with.

In “Knight Vision” Barney and Robin hand Ted girls on a silver iPad so that he isn’t “self-fiving” all weekend long. Since hooking up at a wedding is an apparent goal of groomsmen and bridesmaids everywhere in TV land, Ted cosies up to Cassie who quickly reveals herself to be as crazy as Abby Elliot’s Jeanette from last season. After a string of choosing…poorly (brought to you by that knight in Indiana Jones and the temple of I didn’t actually pay attention in this movie) Ted spends the night listening to break up stories in between cries. Everyone at the wedding knows he and Cassie have been together all weekend (even though it’s still Friday night) so Ted stills makes it to the train station, in the end, in order to eventually meet the girl under the yellow umbrella.

Marshall still hasn’t made it to the hotel, which means more road trip time with the awful Daphne. She decides Marshall needs to practise telling Lily he was offered a judgeship, which, according to the internet, is not a made up word. Even after spending the whole episode explaining how big a deal this conversation is to Marshall and that he must do it right, she still ends up telling Lily via text message because she is just plain horrible. Kind of seems like a throw away conflict, but hey, maybe this means Marshall will get to the hotel faster, even if it is just to fight with the animated ginger.

Meanwhile, Lily tries to charm the minister, whose church is super cute, but Richard Gilmore is not having any of her apparent lies. He thinks she is trying to pass off her and Marshall’s meet cute as Barney and Robin’s because they’re too embarrassed to admit how they actually met. The duo try to explain that Lily’s deceit is because she’s “drinking drugs” and almost get away with it if only Robin wasn’t so keen on clarifying that it was her who felt up her boss, not the other way around. The too strict minister cannot take all the lies so he decides not to marry the two of them, which becomes a cow’s opinion* after he dies hearing all the appalling characteristics of Barney and Robin, which was way too long a list for characters we’re supposed to be rooting for.

Even without a real glimpse of the Mother, episode six turned out to be one of the good ones this season. Not their best work, but there’s always tomorrow. Seriously, why isn’t it Saturday yet?

*It’s like a cow’s opinion, it doesn’t matter! Friends reference, anyone? Anyone? Bueller? Bueller?