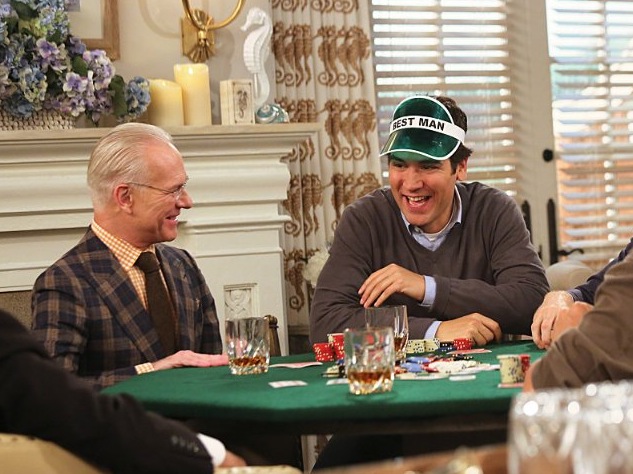 The world of How I Met Your Mother is so bizarre its up on its own circle, hovering just below the circle of people who design Lady Gaga’s outfits. It’s one of the only shows that stay consistent, maybe not it its humour, but in its story telling ability. “The Broken Code” is a great example of how when the show creates a plot with holes, it fills them faster than my DVR on a Thursday.

This week’s HIMYM was centered filled with throw backs to season past. I’m thinking the whole season is just going to be little proofs here and there that the writers knew where they were going all along.

We start with Barney calling out Ted for holding hands with Robin, because that awkwardness is breaking the bro code that Barney holds so dear, and exploits so often. Ted says he was just helping a bro out by comforting Robin and Barney seemingly lets it go. Now, usually I’m great at predicting what’s to come in shows because I watch so many and television tropes are recycled, but I didn’t see the Barney being petty aspect come into play. I know, I know, I totally should have because Barney has never really been a good sport, but I honestly believed that holding hands wouldn’t be a big deal and he was only making Ted miserable in his best man duties because he had a giant reward for him in the end. Turns out I was vehemently wrong and not only did Ted get relegated to the basement (no way a hotel actually has a bed down there) but he gets fired from best man only to be replaced by the Karate Kid (not the Jayden Smith one). When Ted finally confronts Barney about it, Barney reveals that he’s upset Ted broke the bro code. Ted calls him out for all the times Barney himself has broken the code (filling the aforementioned plot holes) and a Marshpillow 2.0 (Lily’s upgraded version of the original, now with Marshall on an iPad) has to step in to be the impartial bro. After some rom-com inspired hand holding on the beach, Ted admits that he still has feelings for Robin because love doesn’t just go away that easily. Apparently, neither does this plot line.

On the girl’s side of things, Robin is upset that Lily is such a bad maid of honour for forgetting to send out invitation to her bachelor party, and Lily finally has to admit that “average size girl from place” isn’t as easy to track down as Robin would think. Turns out, Robin has no girls because she hates women and women hate her (with the exception of Lily and Patrice). Once again, my television predicting skills are soured because I absolutely thought this would be the perfect opportunity to introduce Robin to the Mother. Instead, we get a string of women not men enough to be Robin’s girls. Until Robin meets her hockey loving match.

I know it’s only 3:00 pm on Friday before the wedding, but it really feels like the writers are just filling time at this point. Unless they are going to make the Mother even someone Robin can get a long with, what is the point of revealing she has no girls, only to find a girl, and then immediately have Lily get jealous and threaten said girl? We already knew Robin was a scotch drinking lumberjack, (who apparently has the enviable metabolism of all women everywhere) so why are the precious final episodes not giving the viewers a chance to fall (even more) in love with the Mother?

So far, a great job has been done of making this season much better than the past, even if it is only Friday and Marshall still isn’t with the rest of the gang. Seriously, whom did Jason Segel piss off to get reduced to such an awful story line? At least Tim Gunn was around to fill the goofiness quota.