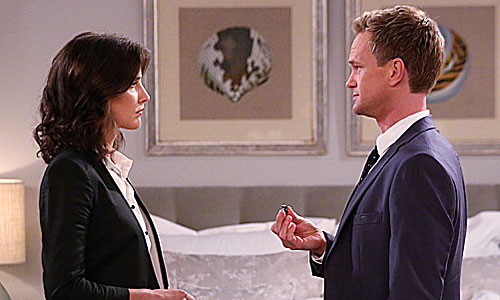 It’s forty-eight hours before the wedding and this episode of How I Met Your Mother has seen more character inconsistencies than any other thus far. I’ve heard gambling brings out the worst in people, but man, did “The Poker Game” exist in some kind of alternate HIMYM universe? It’s not that the gang (plus James) were totally out of character this episode, but they definitely were not their usual selves.

At first, Marshall is back to the lovable goof he is when he explains why Gazzola’s pizza place in Chicago is the best he has ever had, minus the rats of course, and that he and Daphne must pull over. He begins his tirade and I remember why Marshall is my favourite character. It helps that throughout the episode, there’s flashback upon flashback allowing Jason Segel to play off the more comedic counterparts of Josh Radnor (Ted) and Alyson Hannigan (Lily). The inconsistencies between these three begin when Lily is fuming (not unusual) at the poker game. She’s upset that Ted is buying Barney and Robin three wedding presents when she and Marshall never even got one.  That’s Lily and Marshall’s first mistake. We’re talking about Ted Mosby here, the man never forgets anything (as evidenced by the premise of the show). Their second mistake is not just asking Ted where their present is. We’ve seen these people grow over the last nine years and it’s hard to believe that a group who had an episode dedicated to interventions would have a hard time brining anything up. The third mistake was not realizing how devious Stuart was to begin with. If it were Marshall talking to Stuart and Claudia about the coffee maker, I would believe he could have fooled him, but not Lily. Lily has all these “front porch feelings;” she’s generally very perceptive of people. It’s very out of character for her to believe Stuart over Ted. Thankfully, in the end, we got a very in-character friendship moment between Ted and Marshall, pizza and all.

In almost-married couple land, Robin was very in-character, competitiveness and all, throughout the episode. Barney and James Stinson, however, were not. During the poker game, James made too many anti-marriage quips for Robin, so she challenged him to a poker duel. Just a few episodes earlier (hours in HIMYM world) James was saying how his marriage fell apart, but that didn’t mean that everyone else’s was doomed. So what’s with the 180? And the sore loser, go tell mommy act? James has always been the straightman (excuse the irony) to every other character’s moments of insanity. He pulled a Barney all episode. Barney, on the other hand, has become even more unbelievable this season. Shortly after his craziness, there’s usually a scene of clarity, where Barney realizes he’s being a goof, and then stops. I don’t know if it’s the craziness of the wedding or what, but his outburst towards his brother and mother was too childish for even Barney. Sure, it sets up a great rivalry between Robin and Ms. Stinson, but I could have done without Neil Patrick Harris breaking a vase while he storms out.