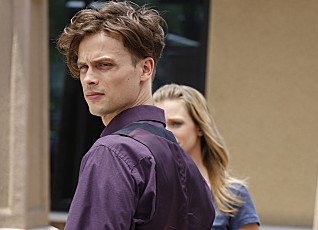 The best thing about crime procedurals is that each episode tends to be independent, which means anyone can drop in on an episode, understand what’s going on, and enjoy some twisted television. After Criminal Minds summer hiatus however, it decided to come back with a two parter. The first of which “The Inspiration” started off seeming like a lackluster episode, but it’s twist on the twistiness of it all is what really made it interesting. Also confusing. Actually, mostly confusing.

The premiere consisted of a serial killer named Wallace stabbing his victims and then shooting them through the heart. Now, I don’t know a lot about serial killers but as far as my understanding went, using two different methods of torturing and killing seems unusual. He also placed them in a praying mantis position and committed a few other unspeakable acts. It gets confusing after the predictable the bad guy kills some girls that represent another person, then Garcia does some computer techie magic the FBI knows everything. The twist in this episode was the fact that the murderer has a twin. That no one mentioned. Or knew about?

In the second episode “The Inspired,” it is revealed that at the very least, the mother knew she had twins because she is actually the biological mother, not an adoptive one like the premiere had me thinking. But she is disappointed with Wallace and wishes she had raised the other, Jesse, instead. And the father? Just as troubled as the rest of the family. Apparently the mother has Mary mother of God complex, even though asking one son to kill the other isn’t the same as what Mary did unless I really misunderstood 12 years of Catholic school.

Criminal Minds is a really fantastic crime procedural when it wants to be because it delves into the minds of the killers. The audience gets to see what they’re thinking while they’re doing it. Even though it takes the mystery of the whodunit out of it, it’s still fascinating to see why the criminals do what they do. Lately, however, it has just become another procedural show, one that really could use a whodunit mystery like they finished with in season seven and like they unsuccessfully tried to do in throughout season eight.

I’m hoping they can get back to their prime and make me interested in how they solve each case, even if it is just the mystery of who gave Spencer Reid that awful haircut.

Line of the episode:
“Apparently the BAU is trending on twitter, whatever that means.” – Fat Tony Joe Mantegna letting us know how out of touch he is with the world.