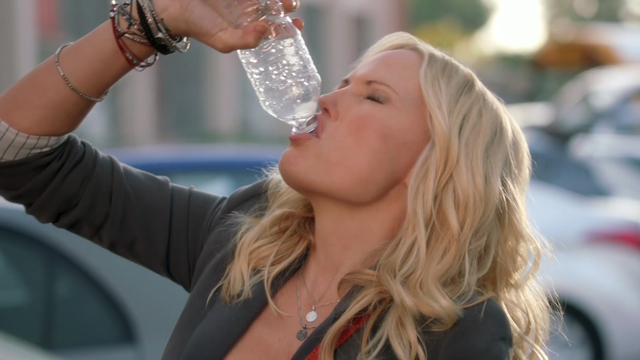 “Everybody! The neighbors are filiming, time to go inside!”

With the premiere of Trophy Wife, ABC seems out to prove that despite its cancelation of Happy Endings, The B**** In Apartment 23, and the moving of Cougar Town to TBS, the network still has not completely given up on single camera comedies. At a time when CBS is making millions and millions from multi-cam sitcoms with wide appeal, ABC has actually managed to produce a show that is much smarter and less mainstream then its terrible name would imply.

Trophy Wife is the story of Kate, a party girl committed to the single scene, and Pete, a twice-divorced older lawyer with a large family and unavoidable set of responsibilities. Despite their vast differences, Kate and Pete connect after an unfortunately bloody karaoke accident and a trip to the emergency room. They sit in the waiting room, clearly smitten with each other, until Pete’s entire family shows up, craziness in tow. The show jumps forward in time and, instead of being scared off, Kate is now Pete’s new wife, and is determined to prove herself to be a good step-mother and responsible adult, and not just the titular “trophy wife”

The cast of Trophy Wife is headlined by Malin Akerman and Bradley Whitford as Kate and Pete. Akerman is most familiar to audiences as a film actress, appearing in Rock of Ages, Wanderlust, happythankyoumoreplease, and Watchmen, and is making the transition to network tv after starring in the Adult Swim comedy Childrens Hospital. Bradley Whitford has made a career of playing intelligent and neurotic men with a huge vocabulary, exemplified by his long running role as Josh Lyman on The West Wing. Kate and Pete are far from the only characters featured in the show, with the remaining ensemble cast including Marcia Gay Harden and SNL-alumni Michaela Watkins as the ex-wives, and Natalie Morales as Kate’s best friend and fellow party girl. The show is very well cast, especially when it comes to Pete’s wives, as his romantic trajectory actually makes sense when viewing these women. First there’s Diane the doctor, whose shares a type-A personality with her ex-husband that surely doomed their union, then there’s Jackie, the new age hippie and Diane’s opposite, who ultimately ended up being too opposite for her marriage to Pete to work out. The three children that Pete has with his ex’s play a big part in the show as well, and fit well into the mold of smart-beyond-their-years children popular in modern comedy.

Despite the ad campaign focusing on Malin Akerman’s character, the show is much more of an ensemble than the previews imply. The pilot episode has three different plots running simultaneously, quite the juggling act with any new show. The main plot revolves around Kate taking Pete’s place at a parent teacher meeting involving her step-son and the so called “erotic fiction” he presented in class, which appears to be inspired by Kate. Then Pete and ex-wife Jackie run around to various pet stores trying to replace not one, but two deceased hamsters before the children find out. And lastly, Kate’s best friend Meg is drafted to babysit adopted son Bert, who is much savvier and cutely manipulative than expected. The show does a good job bouncing back and forth around the storylines, and presents them all in a very balance manner, which highlights the fact that this is an ensemble show even more.

Like any pilot episode, there are a couple of kinks in the first 22 minutes of Trophy Wife. The show features narration from Kate in the opening and closing scenes, and the show can’t seem to decide if they want to make this a form of episode bookends, or ongoing commentary a la Scrubs. In its present state it is stuck in between these options, and comes off a little distracting and unnecessary. The way the storylines are divided in the first episode have a positive and a negative effect. Kate and Pete spend the vast majority of the episode apart from one another. While this has the result of immersing Kate into her new family, at this point all we have seen of their relationship is the initial meeting, before leaping into their married life. Akerman and Whitford have a natural chemistry, but it would have been nice to spend more time with their characters as a couple, and get the audience to invest more into their relationship.

Trophy Wife seems to suffer from the same fate as fellow ABC sitcom Cougar Town: it got strapped with a dumb title early in development, and remains stuck with its branding despite the fact that the premise has grown past it.  There are large portions of the show where Kate, the titular trophy wife, is not featured at all. This is an ensemble show, closer in vein to Modern Family than a series structured around one character. Ackerman actually shines a Kate, mainly because the show makes it clear early on that she is actually a good person who married Pete for love. If this show had premiered six years ago, Kate likely would have been a dumb, gold-digging twenty-something looking to get rich and exploit her new family. Instead, Kate makes tremendous efforts to ingrain herself and prove her desire to be a part of the new family unit. She cares about the children, to the point where she puts herself into embarrassing and uncomfortable situations for their sake. Trophy Wife is smarter and funnier than its one-note title would imply, and features a strong cast playing likeable characters who are actually trying to work together for the betterment of their extended family.